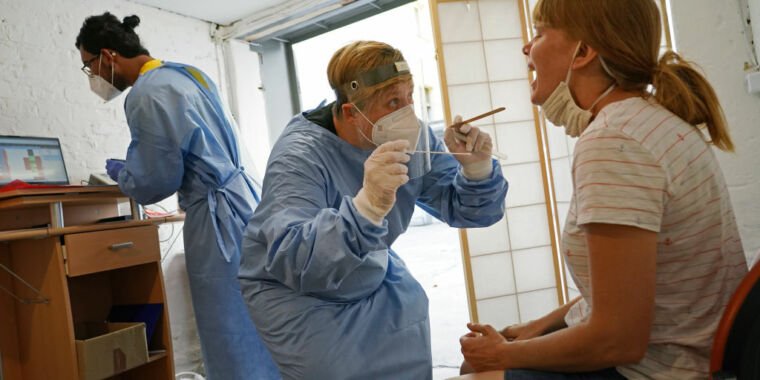 As the magnitude and threat of the COVID-19 pandemic became clear, researchers tracking the spread of disease were quite unanimous: To give us time to develop a therapy or vaccine, countries had to put in place heavy-handed restrictions to limit the chances. for the virus to spread. Experts painted terrifying images of massive spikes of infections that would overwhelm local hospital systems if lockdowns weren’t put in place, leading to many unnecessary deaths. For countries like Italy and Spain, already in the throes of an uncontrolled spread, reality bore these predictions. Peaks rose sharply before the restrictions were imposed, but fell almost as much once they were enacted.

But those same models also predicted that ending restrictions would put countries at risk for the virus returning a few months later, forcing governments to decide again between strict restrictions or an out-of-control pandemic in the next step of a cycle. which would repeat until a vaccine or therapy became available. Those countries now have a slightly different question: Are there ways to get the virus under control without resorting to a cycle of on-and-off lockdowns? For countries like the US, which have put in short, erratic and half-hearted restrictions so that peaks are not separated by a big trough, the same question will become relevant if we ever get the virus under control.

A new study by a large international team uses epidemiological models to explore ways to keep things in check while allowing most of the population to resume semi-normal lives. It notes that there are ways to tackle the easing of restrictions, but these require a combination of an effective contact tracing system, extensive testing and the willingness of households to quarantine together.

From real world to model

The study was based on an epidemiological model – in this case the basis was a fairly standard version that divides the model population into groups of people who are susceptible, infected or recovered. But the model used here was considerably more complex, thanks to the much better understanding we now have of the behavior of SARS-CoV-2.

As usual, people in the susceptible pool become infected by coming into virtual contact with someone in the infected pool. But instead of going directly into the contaminated pool, they then experience a period of latency, during which they are not yet contagious. Some people leave the latency in an asymptomatic infection, which allows them to still transmit the virus until they reach the recovered pool. Others follow a different path through a pre-symptomatic but infectious phase, through a symptomatic and infectious period that is modeled to have a severity that may include time spent in the hospital and/or intensive care unit. This allows the researchers to track the kind of stress that a given level of infection would cause on the health system.

To model the kinds of interactions that could allow the virus to spread, the researchers leveraged a key source of real-world data: anonymized cell phone data. In this case, they had six months of pre-pandemic cell phone location data from the Boston area, which they used in conjunction with census data. This allowed them to generate a three-layer interaction model, tracking infection probabilities at the level of people sharing housing, those at work or socializing, and those attending school.

To provide a baseline for their model, the researchers ran it without any constraint. As with other less sophisticated models, it caused a massive spike in infections that far exceeded hospitals’ capacity to treat patients. At its peak, the typical infected person passed the virus to four people in the susceptible pool. By the time it slowed down, 75 percent of the population was infected.

Restrictions and how to end them

The researchers then switched to focusing on what happens after restrictions begin to relax. They ran the model in a scenario where an eight-week stay-at-home order was followed by the reopening of workplaces for four weeks, before most restrictions, including those on restaurants and theaters, were lifted. However, schools and universities will remain closed. The model here successfully matched what happened in New York City in terms of the number of contacts people typically have each day under the various restrictions.

But it also has bad news for New York City and elsewhere: a very large spike in infections occurring in the wake of the complete lifting of restrictions. This has not happened in most places, in part because many workplaces have not reopened and many people have taken additional measures, such as the use of face masks, that are limiting the spread of the pandemic. But it does indicate the risks of a full reopening, especially in places where the other measures cannot be guaranteed. While the increase in cases is only about half of what the model indicates we’d see if we didn’t act, it’s still easy enough to overwhelm healthcare systems.

But the researchers focused mainly on one way to deal with reopening, which they argue could greatly reduce the risk. It requires large enough testing capacity to identify approximately half of symptomatic COVID-19 cases within two days of symptom onset. Once identified, these people will be quarantined at home for two weeks. Critically, anyone who normally lives with that person will also be required to quarantine at home for two weeks – essentially treating households as separate units for quarantine purposes. Another key to the researchers’ plan is that contact tracing is efficient enough to track down a fair percentage of people who have been around those who get a positive test (they try values ​​ranging from 20 percent to 40 percent of traced contacts) and that said individuals are quarantined.

In general this seems reasonable. It does not require us to identify asymptomatic cases or the people with symptoms with complete efficiency. It also doesn’t expect high levels of successful contact tracing, which would likely require most of the population to install contact tracing applications on their smartphones. But it must also be recognized that the US testing capabilities are not nearly good enough to make this happen today.

The results in this model are quite dramatic. Even with 20 percent successful contact tracing, the “second wave” peak of new infections drops to about 20 percent of the size it would otherwise be, and it remains within the capacity of hospital systems. When contact tracing reaches 40 percent, the second wave is essentially eliminated, with only a slight and gradual increase above the background cases. And while the quarantine restrictions seem strict, the researchers find that at the peak of the wave, only nine percent of the population needs to be quarantined.

This system also allows for a certain degree of flexibility. If we’re better at identifying infected people, we could get away with some households breaking the quarantine. Having the testing capacity to regularly check the status of those in the same household as a positive case would allow for more flexible quarantine. The research team also modeled the opening of schools and universities and found that we could manage that movement and contain the pandemic by increasing contact tracing efficiency to 50 percent.

The authors also show that important additional safety measures, such as the use of face masks, improve the effectiveness of this exit strategy, allowing us to get away with lower efficiency at other steps.

It’s also clear that the approach can be tried out in the real world. There are a large number of countries where testing capacity is high enough to ensure that cases are identified quickly, and few countries where contact tracing is likely to be effective. For countries like the US, where neither is the case, it provides guidance on how states and cities can set goals to meet before restrictions can be relaxed, and what to do as they are.

More broadly, the focus on effectively ending lockdowns marks a crucial transition in the way health experts think about the pandemic. The first models were run simply to understand the potential consequences of an uncontrolled pandemic, and they suggested we could face a year of rising infections, followed by lockdowns – an obviously depressing future. Over time, however, the research shifted to trying to figure out how to get out of the lockdowns in a way that reduces the risk of future spikes. Now we are at the point where models are being used to identify the approaches that impose the least restrictions on society while keeping the pandemic under control.

The key question remains whether we can get society to trust public health experts when they point out the safest ways out of the current mess.