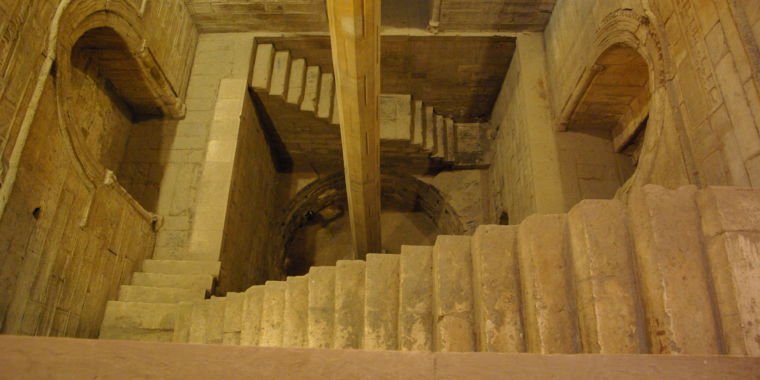 From 305 B.C. to 30 BC Ancient Egypt was ruled by the Ptolemaic dynasty, a Greek family founded after Alexander the Great conquered Egypt. While the wealth and importance of Egypt during this time was legendary, it was also a period of great civil unrest. Perhaps because they were ruled by foreigners, the Egyptian people rebelled against their leadership several times in the 200s, leading to civil wars. But now scientists believe these uprisings erupted in part due to a chain reaction caused by volcanoes on the other side of the world.

There is no doubt that the Egyptians were weighed down by the yoke of their foreign monarchs. The days of the great pharaohs were over and leaders from the north replaced Egyptian culture with Greek gods and architecture. But why did the Egyptians’ resentment sometimes boil over in open rebellion and otherwise simmer steadily? Historian Francis Ludlow of Trinity College, Ireland, and his colleagues believe that ash, dust and other particulate matter released by volcanoes in the 200s BCE caused temperatures to cool around the world. Cooling resulted in less water evaporation, which meant less rain for North Africa and thus less flooding of the life-giving River Nile.

Since the ancient Egyptians were an agricultural culture that lived and died by the harvest, the annual flooding of the Nile was key to survival. Floods ensured that nutrient-rich waters fed the fields and allowed everyone to eat. The level of the Nile was so important to the Egyptian economy that the government based the tax amounts on measurements taken from “Nilometers”, stone pits fed by the river, where they could measure the height in cubits. If levels were too high (destructive floods) or too low (drought), taxes were reduced to account for people’s diminished fortunes.

Years of low rainfall inevitably meant people wanted more and had less to lose. Complaints with the government turned into large-scale revolts, such as the 20-year “Theban Revolt” that began in 207 BC. and the “Egyptian Revolt” against Ptolemy III between 245-238 BC. Both came after periods of increased volcanic activity. While many other factors were at play, there is an undeniable connection between eruptions and rebellion against the Ptolemaic regime.

The volcanic house of cards

Ludlow and his colleagues collected data for their hypothesis from a variety of sources. They consulted the historical record to find out when revolts and unrest occurred in Egypt. In addition, they gauged social unrest by looking at when the Ptolemaic government issued new edicts, such as the famous Rosetta Stone (erected during the Great Revolt of 206-186 BCE), reaffirming the king’s power over a restless populace. The researchers did this on the assumption that the king would only need to issue such edicts if he felt his regime was under threat.

After establishing a chronology of uprisings, the researchers went on a volcano hunt. Volcanoes large enough to affect climate also leave a telltale debris signature of volcanic sulfates in the ice of Greenland and Antarctica. By drilling ice cores from these areas, scientists can reconstruct when an eruption occurred in the geological record.

But could they be sure that these eruptions influenced the flooding of the Nile? To answer this question, the researchers went back to the historical record and noted that eruptions in the 20th century had reduced Nile flooding. Another wealth of data came from careful records of flood levels measured by keepers of the Islamic Nilometer between AD 622–1902. By analyzing this data, Ludlow and his colleagues were able to model how much a given eruption would affect the Nile’s annual flood cycle. The researchers found a clear link between volcanic aerosol levels in the atmosphere and weak flooding of the Nile.

University of Hawaii classicist Robert Littman, who was not involved in the study, urged caution when looking at flood levels. He has studied Nilometers extensively and noted that fluctuations in the level of the Nile would vary greatly from region to region. “We have texts saying that 16 cubits is the ideal level in Luxor. But in the north, in the delta, it is seven cubits.” So there is no guarantee that an eruption would have affected all areas of Egypt in the same way. Littman added that we also cannot ignore political pressures, such as ongoing wars in Syria, as catalysts for insurgency.

Ludlow agreed with Littman that bad flood seasons were only one cause of social unrest. He acknowledged that the revolts were “the result of many circumstances that happened to coincide at the right time – these included ethnic tensions, with some resentment bubbling up among the native Egyptian population against the new Greek elites who ruled Egypt after Alexander the Great’s conquest , combined with … economic policies of the Ptolemies, such as the decision to focus heavily on free-threshing wheat – as opposed to other grains that were less vulnerable to drought – because this was the favored bread grain in the Greek world and could be exported for more profit.”

But, he added, the low flood levels could be a tipping point. “We consider the volcanic eruptions and associated failures of the Nile’s summer floods as triggers because their impacts occur suddenly and without warning. There may be decades without a major volcanic eruption, but then one or more suddenly happens,” he explained. out via email. . “Another way of putting it is that you might consider ethical tension and economic stress as a chronic contributor or cause, while the sudden and short-lived shock of a volcanic eruption is an acute contributor of cause.”

In other words, Egypt’s already troubled polity teetered on the brink. The abrupt reversal of fate caused by bad flood seasons pushed them into armed rebellion.

There are interesting exceptions. During the 1940s and 1930s BC. Egypt suffered greatly from the reduced flooding and associated dangers such as mass starvation, plague and inflation. But Queen Cleopatra, the last of the Ptolemies, managed to suppress the rebellion. She did it, Ludlow said, by “offering grain exemption from state granaries and prohibiting the export of grain.” Revolts caused by volcanoes were not inevitable. Good government policies can make up for environmental disasters.

Ludlow and his colleagues say the Nile’s climate history is a lesson for cities facing disasters today. Yale environmental scientist and co-author Jennifer Marlon noted that “it is very rare in science and history to have such strong and detailed evidence documenting how past societies responded to climate shock.”

UC Berkeley Professor Solomon Hsiang, who was not involved in the research, has spent most of his career demonstrating correlations between natural disasters and long-term socioeconomic problems. In recent years, he has worked with the Global Policy Lab to demonstrate that climate change disasters, such as typhoons and wildfires, can lead to economic downturns from which countries may never recover.

Still, at a recent conference, Hsiang said these studies should make us hopeful. “This is the first time in human history that we have the technology to look ahead to what could be down the road,” he mused. “In past societies, leaders relied on fortune tellers to make decisions. We have data and science and analytics that allow us to see more clearly what’s to come. So we can make informed decisions.”