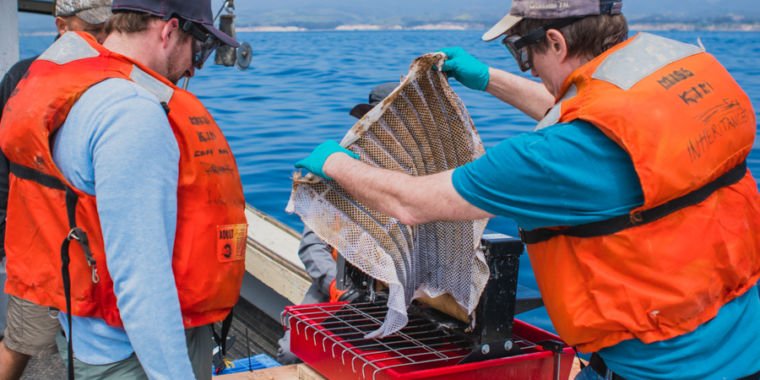 In March 2017, Ars wrote about a new material that could absorb oil like a sponge. The so-called Oleo sponge could be wrung out, the oil could be collected and the sponge could be reused. The material had just been developed at Argonne National Laboratory (ANL) outside of Chicago, so it was still being tested in controlled environments.

Now Argonne has announced a successful field test of the Oleo Sponge at an oil spill in a canal near Goleta, California.

The test, conducted in April, involved submerging the Oleo Sponge in the Coal Oil Point Seep Field in the Santa Barbara Channel. The oil seepage is natural and is one of the largest in the known world (PDF). Not only is a lot of methane released every day, but oil is also released into the canal water. A press release from ANL notes, “The seeps have been active for at least 500,000 years, releasing about 40 tons of methane, 19 tons of other organic gases and more than 100 barrels of liquid petroleum every day.”

The goal of Argonne’s test in April was to use the Oleo Sponge to remove oil shine, a coating of oil on water that is generally only one micron thick. Removing that kind of oil could be a primary application for Oleo’s Sponge, especially in ports and near major metropolitan areas, where the runoff vehicle vomits oil into its natural habitat after rain showers and recreational boats. Oil gloss is usually too thin to be burned or skimmed off (which are questionably effective methods anyway).

The Argonne researchers built two-by-two-foot Oleo sponges, which are made of polyurethane foam infused with molecules that bind with oil but reject water.

“The Oleo Sponge worked exactly as researchers predicted: it was able to successfully remove oil shine from the water’s surface, without leaving a visible trace,” ANL wrote. The tests confirmed what the researchers had seen in a saltwater research tank in New Jersey earlier this year. The sponge can catch oil above and below the surface of the water and test sponges have been wrung out hundreds of times with no visible wear.

Now Argonne is looking for a partner to further develop the sponge.

Alex Mitchell, a communications lead for Argonne, told Ars on Tuesday that “Argonne is in talks with several organizations/entities interested in working with Argonne on commercialization, and several seem promising.”

He added that the research into the development of the sponge was funded by the Department of Energy, so there is a strong preference for licensing the technology to a US-based company. The lab also goes above and beyond to ensure that each potential partner has the resources to scale up the technology and the resources to commercialize the sponge. “[T]there’s a significant gap between a promising lab-scale technology like Oleo Sponge and a scaled-up, commercially ready product, so that’s what the discussion is now about,” Mitchell said.