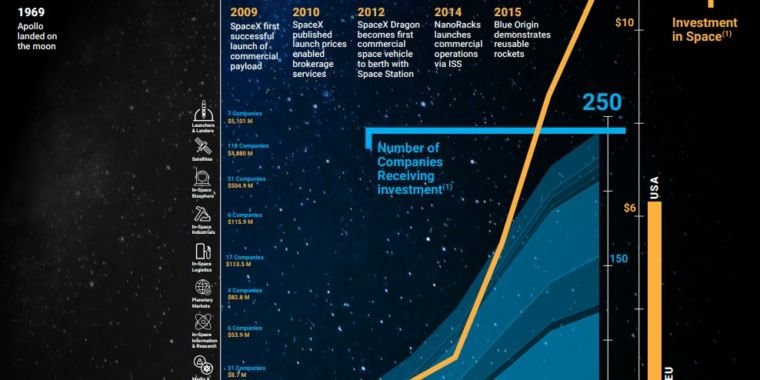 In July 2009, SpaceX launched its first commercial payload – a 50 kg Earth observation satellite for Malaysia – flying into space aboard a privately developed rocket. According to a new space investment report to be published Tuesday by the Space Angels, an angel fund and venture capital fund focused on space, it marked a major turning point between the “government” space age and the “entrepreneurial” space age.

“With that launch, SpaceX has significantly lowered barriers to entry in the space industry,” the fund’s CEO, Chad Anderson, writes in the new report. “Vertical integration has allowed the company to dramatically reduce the cost of getting into orbit. But what deserves at least as much praise is their decision to publish their prices, which has fundamentally changed the way we do business in space. This transparency enabled would — be space entrepreneurs to develop a business plan and raise equity based on those cost assumptions.”

The Space Angels organization prepares quarterly investment reports, but has not published them for public consumption until this week. The report breaks down equity investments in the space sector by year since 2009 into angel, venture capital, corporate and other forms of non-governmental investment.

From 2009 through September 2017, the report finds $12 billion in equity investments in the space, with annual amounts growing significantly in 2015 and beyond to more than $2 billion annually. At $10 billion, launch services, landers and satellites have accounted for the bulk of this investment since 2009.

Aside from the launch of SpaceX that year, other data supports the year 2009 as the beginning of an entrepreneurial space age where the private sector began to invest to recoup profits from space activities. About 250 aerospace companies have received non-governmental equity financing, the report says, and 88 percent of those have been funded since 2009.