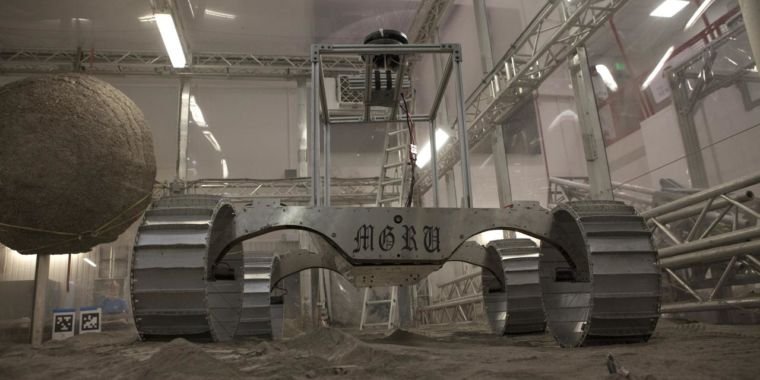 There’s no question that new NASA administrator Jim Bridenstine wants humans to return to the moon and open Earth’s celestial neighbor to commercial activity. Just check the moon background from his new Twitter account or some of his writings on the subject. Soon, however, his devotion to the moon will be put to the test.

On Thursday — just his third full day on the job — a group of lunar scientists, engineers and mission planners sent Bridenstine a letter to complain about the cancellation of the Resource Prospector program. This mission would send a rover to the moon’s polar region to search for and study ice deposits that scientists believe are there. Proponents of lunar exploration say this water source could provide motive power for reconnaissance missions deeper into the solar system.

In recent years, the existence of this water has become a major reason NASA (and other national space agencies) have begun formulating plans for lunar resource development. Indeed, when President Trump signed the Space Policy Directive 1 last December, he sent NASA back to the moon, partly for the purpose of “long-term exploration and use” of that orb.

But before people go to the very cold polar regions, it’s best to know what exactly they can find there. This was the purpose of the Resource Prospector mission, to better characterize Arctic water ice deposits and assess the ease (or difficulty) with which they could be obtained.

However, on April 23, the day Bridenstine was sworn in, the Resource Prospector mission was formally canceled by NASA. (It doesn’t look like Bridenstine was behind the change). This sparked outrage from lunar scientists at the Lunar Exploration Analysis Group who have welcomed the Trump administration’s proposed return to the moon.

“This action is being viewed by our community with both disbelief and dismay, especially as the President’s Space Policy Directive 1 directs NASA to go to the lunar surface,” the group wrote to Bridenstine in an April 26 letter. “RP was the only polar lander-rover mission under development by NASA.”

The group noted that the Resource Prospector recently moved from NASA’s human exploration budget to its science budget, but said it was misleading for two reasons. First, in the design work of the past five years, the prospector has not been optimized for science, but rather as a precursor to human exploration. Second, NASA’s lunar science program is designed for small robotic landers, not the 300-pound prospector rover.

In an interview with a co-signer of the letter, the lunar exploration group chair emeritus Clive Neal told Ars that they acknowledged that they were touching Bridenstine with this issue, even when he had just started his job. However, Neal said the mission will close in May. “We believe that time is of the essence,” Neal said.

Two other lunar scientists, who declined to be cited for this article, suggested that the move to kill the Resource Prospector could be an attempt to undermine the nascent moon return program. The prospector would land on the moon in 2022 and could inform human exploration plans in the future. Without a commitment to the lander, these scientists suggested, it will be much easier for the next presidential administration to cancel the moon landings and put NASA back on a “Journey to Mars.”

So the prospector could be seen as an early test of Bridenstine’s — and the Trump White House’s — true affinity for moon landings.