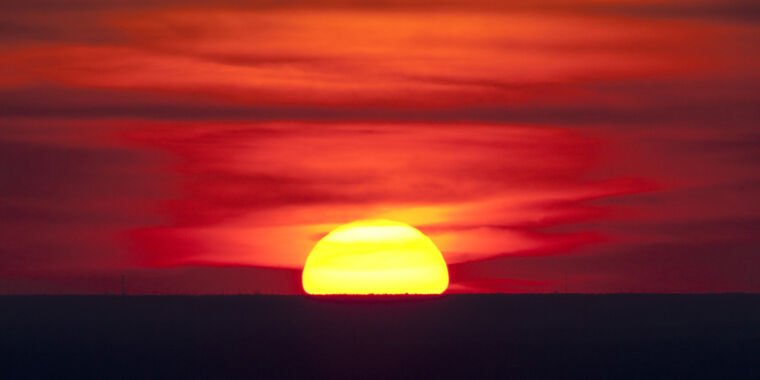 Solar energy is currently dominated by photovoltaic devices, which have achieved huge economies of scale to price dominance. But these devices are not necessarily the best choice in all circumstances. Unless battery technology improves, adding significant storage to solar energy production is quite expensive. And there are modes of transport – long-distance trains, air – where batteries are not a good solution. These limitations have kept researchers interested in alternative ways to use solar energy.

An alternative option is to use the energy to produce a portable fuel, such as a hydrocarbon or hydrogen itself. This is possible with the electrons produced by photovoltaic systems, but the added steps can reduce efficiency. However, systems that convert sunlight into fuel more directly have suffered from even worse efficiency.

But a Japanese group has decided to tackle this efficiency problem. The team started with a material that isn’t great – it only absorbs in the UV – but is well understood. And the researchers found how to optimize it so that the efficiency of splitting water to release hydrogen is approaching its theoretical maximum. While it won’t be helpful on its own, it could point the way to developing better materials.

Why are materials bad at using the energy in sunlight to split water? Consider everything they need to do. For starters, they need to be solid photovoltaic materials that efficiently convert photons into free electrons and the associated hole with a positive charge. The materials must somehow prevent those two charges from recombining as they make their way to the surface, where they can interact with water. Once the charges are on the surface, the material must also act as a catalyst, breaking up the water and releasing hydrogen and oxygen. This last stretch isn’t easy, as oxygen production is driven by holes, while hydrogen production requires electrons, meaning the two processes must be physically separated.

Finding a single material that meets all these requirements is not an easy task. The feedstock used here, strontium-titanium oxide, has been used in this process for decades and has never reached much more than 60 percent of its theoretical maximum.

The Japanese team’s approach was to address each of these inefficiencies, although it’s not entirely clear from the paper whether each of their solutions was entirely intentional.

For starters, their choice of materials – SrTiO3-covers the efficiency of converting photons into electrons and holes. It is extremely good at it, seemingly capable of doing so with nearly the maximum efficiency predicted by theoretical calculations.

And because of its history, people had found ways to improve the transport of charges within the material. For this work, the researchers doped the material with aluminum. The aluminum atoms tend to settle in the defects that slow the transport of charges, allowing electrons and holes to recombine. When aluminum atoms are present, they form a kind of paper over these defects, allowing the charges to move freely through the material.

Where the SrTiO3 tends to fall short is in catalysis. Critically, the article shows how the authors managed to make significant improvements. A number of developed catalysts are good at driving the splitting of water. But the researchers still had to keep the electrons and holes separate as they moved toward the catalysts.

The material appears to do the work for the researchers. In the course of their work, the researchers found that the electrons and holes appear on different parts of the surface of the SrTiO3† While the surface of the material appears even and smooth to the eye, different areas will expose different planes of the underlying crystal structure at the atomic level. And it turns out that the electrons and holes go through these differences to different surfaces.

Amazingly, the researchers seemed to figure this out by adding an additional catalyst on top of the SrTiO. to deposit3† They used a process called photodeposition, which uses high-energy photons to chemically bond a substance to an underlying surface. In this case the underlying surface is the SrTiO3 material, and the wavelengths used were the same that produce electrons and holes. As a result, the correct catalytic converters were linked to the same areas where the required loads were delivered.

For the hydrogen-producing part of the reaction, the researchers used a rhodium-based catalyst that will work to produce oxygen or hydrogen. But it was combined with a chromium oxide that physically blocked the interaction of oxygen with the catalyst. This caused the electrons to end up where the hydrogen catalyst reacted. These chemicals were deposited through a reduction reaction, landing them where there was a supply of electrons.

Meanwhile, a cobalt-oxygen catalyst was deposited through an oxidation reaction, thereby linking it to the holed regions. As a result, this oxygen production catalyst was only deposited where the necessary holes were supplied.

Summarizing the process, the structure of the underlying materials provides electrons and holes to different parts of the SrTiO3 material. The researchers figured out how to use that fact to specifically link the right catalysts to those sites.

On the edge of theory

It’s impossible to say how efficient each individual step is in terms of converting incoming photons into the final products, hydrogen and oxygen. The system can only be viewed as a whole and from this perspective it is extremely impressive: the total efficiency is 96 percent of the maximum possible efficiency derived from theoretical calculations. So it’s likely that every single step of the process works almost at theoretical efficiency.

This news is fantastic, except for the part where UV photons are needed for the process to work. The sun produces much of its energy at non-UV wavelengths, and much of the UV light is filtered out by our atmosphere. So this particular material will not power the hydrogen revolution.

The most important thing about this research is that it has identified the principle by which we could create the catalyst that could trigger such a revolution. There is a wide variety of materials that can use light, even at visible wavelengths, to poorly catalyze hydrogen production. There is a much larger collection of photovoltaic materials that could do the same thing when combined with the right catalysts. The work described here provides a recipe that can convert some of it into useful materials.

Get rid of the flaws. Find a material where electrons and holes take different routes through the material. Use the presence of electrons and holes to match the correct catalysts to where they are being charged. If we can do that with a better starting material, we can produce hydrogen via an extremely simple system.