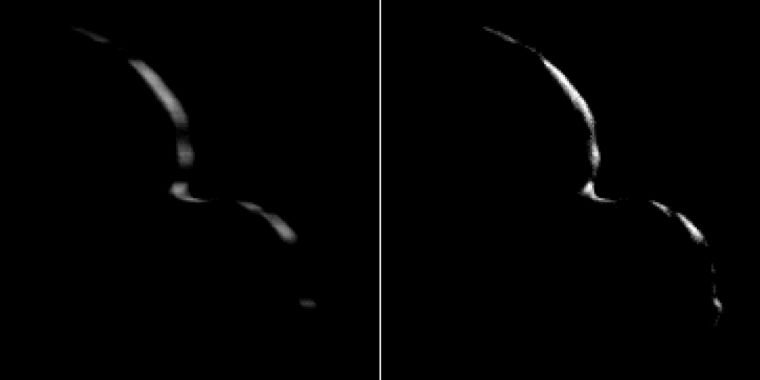 In early January, when scientists pulled their first set of data from the New Horizons spacecraft, they celebrated a strange snowman-shaped object in the outer solar system. From this first look, it seemed that Ultima Thule, formally named 2014 MU69, consisted of two spheres in contact with each other – a binary contact.

However, now that scientists have downloaded more data from the distant spacecraft, our view of Ultima Thule has changed. A series of images captured as New Horizons moved away from the Kuiper belt object at 50,000 km/h, taken about 10 minutes after its closest approach, shows a much flatter appearance.

After analyzing these new images, scientists say the larger lobe looks more like a large pancake and the smaller lobe looks a bit like a walnut. The new photos show a dramatically different object because they were taken from a different angle than the images downloaded first.

“We had an impression of Ultima Thule based on the limited number of images returned in the days surrounding the flyby, but seeing more data has changed our view significantly,” the mission’s principal investigator, Alan Stern, said in a statement. press release. “It would be closer to reality to say that Ultima Thule’s shape is flatter, like a pancake. But more importantly, the new images create scientific puzzles about how such an object could even be formed. We have never seen anything like it in orbit around the Sun.”

It’s safe to say that Ultima Thule’s new apparent shape will only increase the interest of scientists studying this object — humans have never seen such an object so close in the distant Kuiper Belt.

The shape is not unprecedented. As planetary scientist Alex Parker noticed on Twitter“The larger lobe appears to have a shape similar to some of Saturn’s pancake moons, such as Atlas.” However, Saturn’s moons were believed to have formed near the gas giant, in the center of its rings, rather than in deep space.

New Horizons has a lot more data to send back to Earth because the data connection across the 44.4 astronomical units (6.6 billion km) is quite slow. More data should help solve some of these questions as scientists study Ultima Thule. This is important, because this object, and similar objects, are thought to be “pristine planetesimals,” such as those that served as building blocks for larger objects in the solar system in the early days 4.5 billion years ago.