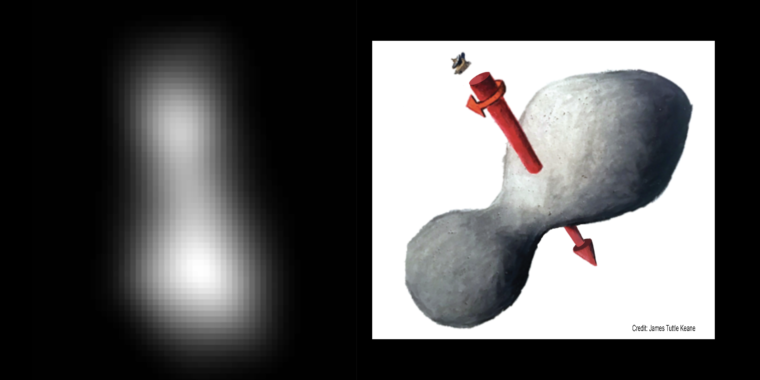 As people around the world celebrated the arrival of 2019, people at the Johns Hopkins Applied Physics Laboratory in Maryland were hard at work. Billions of miles away, the New Horizons probe flew by Ultima Thule, a small object in the Kuiper Belt. By Tuesday morning, the hardware had returned a status report indicating that the flyby went as planned, and New Horizons now has plenty of data from Ultima Thule that it will slowly return to Earth over the coming months. (As the BBC explained, the sheer distance between Earth and New Horizons means the probe’s 15-watt transmitter can handle a data transfer rate of about 1 kilobit per second.)

While we don’t yet have data that will give us details about this remnant of the formation of the solar system, images taken during the approach have solved one of the mysteries that had arisen as New Horizons got closer. But one of the key questions — is Ultima Thule one object or two? — remains unanswered.

Prior to New Horizons’ arrival at Ultima Thule, researchers acquired images as it obscured a background star. These suggested that the body was elongated rather than spherical. But as the spacecraft got closer, it couldn’t detect significant changes in brightness, as you would expect if an elongated body were spinning.

Images obtained on Monday confirmed that Ultima Thule is elongated and rotating – only its axis of rotation was roughly pointed at New Horizons. Thus, approximately the same amount of sunlight surface remained visible from the spacecraft’s perspective, as can be seen in this composite of several images.

An even more detailed view indicates that the elongated shape is anything but a smooth ellipse. Instead, the images suggest that Ultima Thule is a bilobed object with a relatively thin neck connecting the two. This would be reminiscent of comet 67P/Churyumov-Gerasimenko visited by the Rosetta probe. While it remains possible that Ultima Thule consists of two objects in extremely tight orbits, lobed bodies are relatively common in the Solar System, and are brought together when two objects undergo a slow collision under weak gravity. In contrast, speakers at Tuesday’s press conference indicated that they were unsure under what conditions two bodies in such close proximity could form a stable orbit.

As you read this, more data is coming in from the flyby and we can expect big announcements in the coming days, with plenty of details in the months ahead.