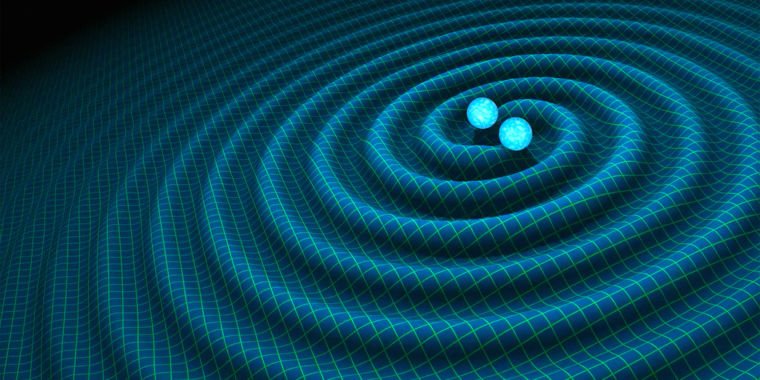 Today, a massive scientific team announced that humanity has added a third gravitational wave detector to its arsenal. And just two weeks after the European VIRGO detector joined forces with the two LIGO detectors, the three teamed up to pick up another black hole merger. While the three have worked together for less than a month so far, there are plans for a substantial observing run next fall.

Gravitational waves are produced when two massive objects spiral inward toward collision. Once they get close enough, their rapid orbiting distorts space itself, causing gravitational waves to ripple out. Immediately after their collision, the object formed by their fusion vibrates like a bubble, momentarily creating a different wave pattern. These ripples in space will alternately increase and decrease the distance between two objects by an infinitesimal amount — just one enough for our most sensitive instruments to pick up.

The new event, GW170814, is similar to the previously detected events. These are black holes with a stellar mass, 31 and 25 times the mass of the sun. Those are heavier than theoretical work suggests that should be possible from star collapse. This suggests that these were formed by previous fusions or that an alternative route of formation exists. The resulting black hole is 53 times the mass of our sun. The missing material – three solar masses of black hole – was converted into energy in the form of gravitational waves. However, the event occurred about 1.8 billion light-years away, so don’t be surprised you didn’t notice anything.

The software that controls the detectors is set up to do a quick-and-dirty analysis to spot potential signals in the data. It then sends out a “trigger” to alert traditional telescopes that there’s a part of the sky they might want to take a close look at. Some of these signals will be false alarms that disappear after detailed analysis, but the chance to better understand these events makes them a valuable risk. In this case, there was no indication of light (visible or otherwise) produced by the black hole merger.

Rumors circulated earlier this year that LIGO had also noticed a merger of neutron stars accompanied by a burst of energetic photons called gamma rays. Neutron stars are less massive than a black hole, so the corresponding release of gravitational energy should be smaller. But these events will almost certainly release photons, visible or at other wavelengths, something black holes are notoriously stingy about. Several telescopes, including the orbiting observatories Hubble, Chandra, and Fermi, all made observations of the galaxy NGC 4993 around this time, as did several ground-based observatories. The Chandra’s observation log indicated that this was in response to a LIGO/VIRGO trigger.

If this has happened, the team is silent about it, although a press conference is underway and I expect the matter to be raised. We’ll update the story if they drop hints.

And then there were three

However, the announcement was significant in ways beyond the discovery, as it is the first discovery by the combined LIGO-VIRGO team. Built in Italy, VIRGO uses the same approach to spotting gravitational waves as LIGO: bouncing light off mirrors that are miles apart and looking for subtle changes in the interference pattern created when the light returns. Passing gravitational waves will change the distance between the mirrors, changing the interference pattern.

At three kilometers long (compared to LIGO’s four), VIRGO is less sensitive than existing detectors, but its presence could make a big difference, as the two teams have agreed to combine their data and analyze it jointly. Seeing a weak signal in three different detectors increases the likelihood that it’s real, and with a third detector we can make much better estimates of where the source of the gravitational waves was. By detecting an event with all three detectors, we can locate the event in a smaller volume of the Universe – the volume is 20 times smaller than we could locate things with just two detectors.

An upgraded VIRGO detector joined the two LIGOs on Aug. 1. This was followed by a 24-day period where all three detectors were searching simultaneously; GW170814 was picked up on August 14. The joint observations ended when the LIGOs ended their observation run and stopped for a period of maintenance and upgrades. The VIRGO detector teased that this has been a productive period, with the website stating, “Some promising gravitational wave candidates have been identified in data from both LIGO and Virgo during our preliminary analysis.”

Which is another way of saying that we should be prepared for black hole mergers to become as boring as finding a new exoplanet. However, any “fusion fatigue” would mark the transition from simply learning about the events to giving us a better picture of the general statistics of mergers and the black holes they feed, which would tell us important things about the universe as a whole. ..which seems like a fair tradeoff.

We’re listening to the press conference and will update this story if anyone says something they shouldn’t. A paper describing the merger has been accepted for publication in Physical assessment lettersand the LIGO team has posted a copy online.