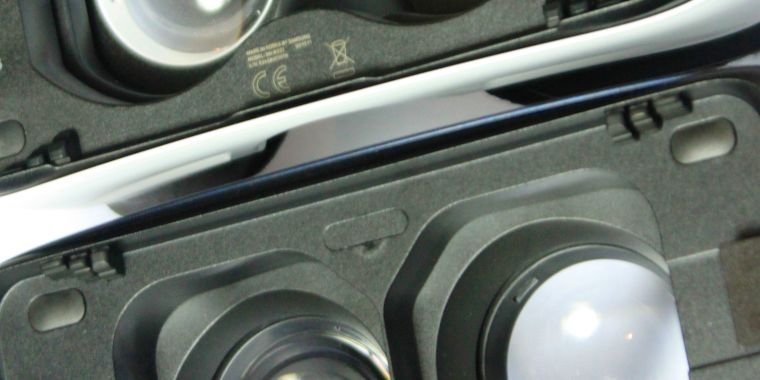 The virtual reality market is still so new that we see a lot of experimentation and iterative design work on the hardware itself. So it’s no big surprise that Samsung and Oculus are releasing a new, redesigned version of the Gear VR, even though it’s been less than a year since the device officially launched as a consumer product (and less than two years since the launch of the Gear VR). early “Innovator Edition” hit stores).

The new Gear VR works much like the old Gear VR. You still use certain Samsung Galaxy phones (anything since the Galaxy Note 5 will work) to provide the display and processing guts. The Gear VR headset itself still offers some crucial extra processing for tracking the angle of your head and a touchpad on the side for basic in-app control (you can also use bluetooth controllers for more complex games). However, the Gear VR still can’t track the position of your head in space, so when you lean forward in a Gear VR app, the whole world comes with you in a sickening way.

The main reason for the redesign is the launch of Samsung’s Galaxy Note 7, which has a USB Type-C connection that isn’t compatible with last year’s Gear VR model. The new Gear VR has a Type-C docking dongle on the front as standard, but that can be popped out and easily replaced with an older USB micro-dock for compatibility with older Galaxy phones. The pass-through charging slot on the bottom of the Gear VR is now also USB Type-C, although the headset comes with a small adapter for charging over older cables.

Aside from that basic compatibility, the most notable change in this year’s Gear VR is the touchpad controls on the side of the headset. That touchpad is now a large, smooth, shallow dimple, with just the tiniest bump in the center and a soft lip on the edge to help your finger feel for its relative position. That’s in stark contrast to last year’s touchpad, which had a large T-shaped groove to guide horizontal and vertical finger movements, a thick round bump to identify the center, and a heavy, raised lip around the edge of the surface.

All told, the touchpad redesign is a change for the better. Yes, the new design makes it a little more difficult to determine the precise position of your finger on the touchpad just by feel, but it’s rare that you need that information when using a Gear VR app. For the kind of taps and quick swipes you’ll be making constantly, it’s much more fun to run your finger across the smooth surface of the 2016 edition, rather than bouncing up and down over the many bumps on last year’s model. year. Just on top of the touchpad is now also a home button right next to the back button, saving you the trouble of holding the button down for a few seconds to return to the main menu.

Cosmetically, the convex front of last year’s model has been replaced by a thin piece of black plastic. This exposes some of the docking equipment on the front of the headset, ruining the smooth lines a bit, but also seems to do a better job of preventing outside light from leaking into the headset’s optics, preventing distracting glare .

Inside that optic, both eye sockets are now separated by a vertical black plastic bar, preventing light from one side of the screen from entering the other side’s view. The lenses themselves are slightly larger too, contributing to a slightly improved field of view (101 degrees this year, compared to last year’s 95 degrees) according to the official specs. I can’t say the difference is particularly noticeable when testing with the Galaxy S6+ Edge, but your mileage may vary on a phone with a larger screen.

Those official specs also suggest that the weight is actually a few grams higher than the 2016 edition, although in practice there’s really no way to notice the difference. Still, we’re a little angry that Samsung couldn’t further reduce the weight of the headset, especially after the first consumer edition shaved a healthy 22 percent off the weight of the Innovator Edition. As it is, the weight is just enough (with a phone inside) to put noticeable pressure on the sinuses and encourage you to use a thumb to support the device while your index finger hovers over the touchpad on the side . When you move your head that much, every gram counts.

There’s new thicker cushioning on this year’s model, though I can’t say it felt much more comfortable on my face. At least that thicker cushioning did a good job of trapping more heat in the eye, contributing to a sweaty overall experience in games that require a lot of head movement. There are also some minor changes to the strap design to improve lines when you remove the optional top support strap; it’s the sort of minor tweak that isn’t particularly noticeable.

Ten months after the launch of the original hardware, the Gear VR is still a no-brainer if you already own a compatible Samsung phone. For $100, you get a comfortable, portable VR experience that’s head and shoulders above cheap solutions like Google Cardboard, even if it’s not quite up to the standards of an Oculus Rift or HTC Vive.

However, if you already own last year’s Gear VR model, save your money and wait for a bigger upgrade rather than investing in the minor tweaks to this year’s model. Even if you don’t have a Gear VR yet, you might want to check out last year’s model instead of this one (unless you have a Galaxy Note 7 – in which case the 2016 Gear VR is the only one that will work). Those older headsets currently cost around $70 (or less if you buy a “refurbished” used unit) and are almost as good as the newer $100 2016 models in every way. If so little has changed, that’s a relative bargain.