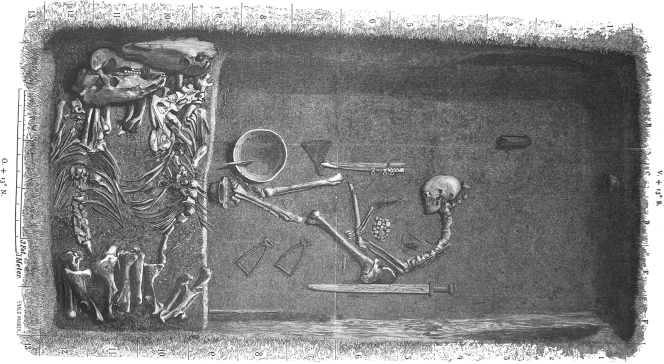 At first, the scientific article seemed like scientific confirmation of a long-held myth about Vikings. DNA and geochemistry experts re-examined the famous Swedish grave of a high-ranking Viking warrior and found that the person buried alongside swords, armor and two sacrificial horses was genetically female. In an article published in American Journal of Physical AnthropologyArchaeologist Charlotte Hedenstierna-Jonson and her team from Uppsala University announced that they had finally proved that there were warrior women among the Vikings.

The claim seemed to fit the evidence. Male Vikings were often buried with swords, and the sword was no doubt associated with the battle-ravaged ideal of masculinity in Viking culture. If we assume that men buried with swords are warriors, then a woman buried with a sword was probably also a warrior. Analysis of the stable isotopes in her tooth enamel suggested that this woman had traveled extensively, just as a warrior would have. In addition, Hedenstierna-Jonson and her colleagues pointed to the many references to fighting women in Old Norse poetry and myth. The bloodthirsty Valkyries are an all-female band of magical creatures who come to every battle and decide who will fall. The recent newspaper American Journal of Physical Anthropology was simply our first scientific proof that there were real women fighting alongside the men.

What we want to see versus what is actually there

It was an exciting story and headlines about Viking warrior women were all over the media. But the reality is more complex and probably says more about us than it does about Vikings. Several experts have come forward to question the evidence. Judith Jesch, Professor of Viking Studies at the University of Nottingham, writes on her blog: “I have always thought (and to some extent still do) that the fascination with female warriors, both in popular culture and academic discourse, is heavy , probably too heavily influenced by 20th and 21st century desires.” Today, many of us are eager to find examples of past female leaders who are just as tough as our female leaders today. And that could lead to misunderstandings about history.

Jesch has written extensively about gender roles in Viking society in her fascinating book The Viking diaspora, and she finds many problems in the researchers’ analysis. For starters, even if men were buried with swords, that didn’t necessarily mean warriors. Swords were often decorative or symbolic. She also rejects the idea that burial with horses and playing pieces suggests “an individual with responsibilities related to strategy and battle tactics,” as Hedenstierna-Jonson and her colleagues argue. “All of this seems to me to move quite quickly from evidence to speculation presented as fact,” writes Jesch.

But Jesch’s most scathing criticism is that the researchers fail to acknowledge an important point: The bones they analyzed may not actually come from the grave in question. The Swedish archaeological site where the remains came from was originally excavated in the 19th century, and the former scientist who led the excavation took out all the bones and bagged them. Some of the bags are poorly labeled and don’t seem to match the grave in any meaningful way.

To find out, intrepid readers should follow a single footnote to another article written by archaeologist Anna Kjellström, who also worked on the study with Hedenstierna-Jonson. She describes the rather messy chain of evidence at Birka, the place in Sweden where the “warrior woman” was identified:

During the current analysis, it became apparent that the bone material and contextual information on the box or bag did not always match the data…there are bags of bones labeled with grave numbers that do not exist anywhere else. In other cases, unburned bones in bags from graves have been documented and recorded according to [archaeologist Erik] Arbman as “cremations” and bags containing the bones of several persons while being documented as one person’s grave.

Another interesting (and possibly controversial) find was a grave where the preserved bones do fit the original 19th-century drawings and descriptions. This is a chamber tomb decorated with fine armor and sacrificed horses. Nevertheless, three different osteological examinations revealed that the individual was female. Whether these are not the right bones for this grave or whether it opens up reinterpretations of weapon graves in Birka, it’s too early to tell.

And therein lies the crux of the problem. The only evidence we have linking an unmistakable female skeleton to the warrior grave is the fact that the identifying material on the bag matches “the original 19th century drawings and descriptions”.

Even archaeologists who believed that this sack of bones was related to the sword and armor doubted that this meant we had found a female military officer. So said archaeologist Søren Sindbæk of Aarhus University Science news he was skeptical. “Have we found the Mulan of Sweden or buried a woman with the rank symbols of a husband who died abroad?” she wondered. His question is not rhetorical. Archaeologists have found many graves of men buried with the oval brooches women used to fasten their cloaks, and these grave goods have always been interpreted as souvenirs of a beloved wife or female relative.

The exception that proves the rule

Baylor University archaeologist Davide Zori told National Geographic that “it is possible, though unlikely, that the woman’s relatives may have buried her with a warrior’s equipment without that being her part in life.” Still, he said he was quite convinced. Even Jesch admitted that the researchers may be right.

But she cautioned that this grave, and a handful of others where women were buried with weapons, doesn’t mean the Vikings accepted women as warriors. The overwhelming preponderance of evidence suggests that women in the Viking world were expected to run households, serve the men and bear children. Even the mythical Valkyries, with their roaring battle cries, are most often depicted in images offering drinking horns of mead to slain (male) warriors.

While fascinating, this tomb doesn’t really change our view of the Viking world much. If the researchers are correct that this woman was a military leader, it simply tells us that there were rare exceptions to the generally rigid gender roles among Vikings. But those would have been extremely unusual and should not be taken as evidence that most people accepted the idea of ​​female warriors.