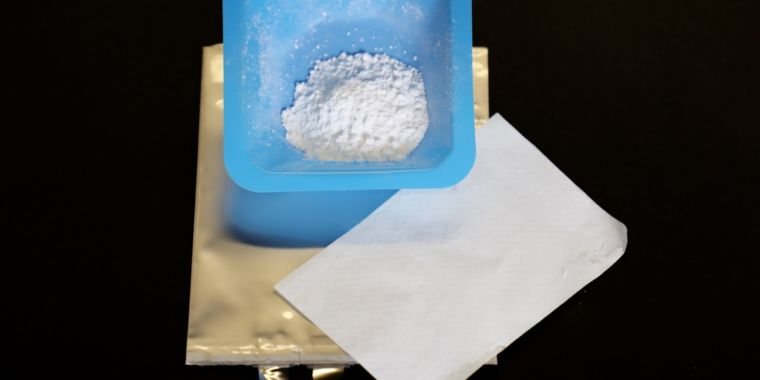 Exploding lithium-ion batteries can wreak havoc on airline flights or in waste facilities after people throw their old electronics in the trash. Now scientists at Oak Ridge National Laboratory (ORNL) have come up with a new chemical recipe that could combat the problem.

A lithium battery has two electrodes, separated by a thin plastic sheet and immersed in a liquid electrolyte — that’s a chemical medium (usually a flammable lithium-ion liquid) that allows charge to flow between a lithium-ion cathode to a carbon anode. When that thin plastic sheet breaks (for example, from too much jostling in an airplane’s cargo hold), the electrodes can come together and short-circuit the battery. This produces heat, which can ignite the liquid electrolyte, and boom! You have a small fire in the cargo hold.

That’s why the FAA bans anything that contains lithium-ion batteries in checked baggage. In 2017 alone, the agency reported 46 incidents of exploding batteries on airplanes.

Non-flammable solid electrolytes could solve the problem, but ORNL physicist Gabriel Veith says it will require a major overhaul of the lithium-ion battery manufacturing process, a significant capital investment that manufacturers may not want to make. That’s why he and his cohorts are exploring ways to modify the conventional electrolyte recipe.

At this week’s meeting of the American Chemical Society in Boston, Veith said he found inspiration for an adaptation while introducing his children to a mixture of cornstarch and water popularly known as “oobleck.”

The nickname is a nod to the childhood story of Dr. seuss, Bartholomew and the Oobleck, in which a magic spell gone wrong causes gooey green stuff to rain down from the sky. The real oobleck is an example of a non-Newtonian fluid. Isaac Newton’s definition of an ideal fluid is one in which the viscosity (how much friction or resistance there is to flow) is mainly dependent on temperature and pressure. That is, water flows the same even if you apply a shear force by stirring or mixing.

However, for non-Newtonian fluids such as oobleck, the viscosity changes in response to a shear force. Initially, the particles in the fabric (in this case a colloid, in which cornstarch grains are suspended in water) are loosely bound, but any sharp impact causes the bonds to become stronger, so that the particles lock into place. Punch a bowl of oobleck and it hardens into a solid and softens again as the energy dissipates.

Technically, it’s a shear-thickening fluid of the kind used in prototype body armor or the “smart armor” first worn by Canadian skiers at the 2006 Winter Olympics. Veith realized that this property could prove invaluable. in an electrolyte solution, which would solidify in response to an impact and prevent the two electrodes from touching each other.

The recipe is simple: just hang spherical silica nanoparticles in the usual liquid electrolytes used for lithium-ion batteries, and your job is done. The tricky part is making sure that all nanoparticles are the same size (200 nanometers in diameter); otherwise it has the opposite effect and the liquid becomes less viscous on impact (a slidinggetting thinner liquid). “And that’s bad,” Veith said. (Again, ka-boom.) There’s a slight trade-off in terms of reduced battery capacity and slower charging, but otherwise the performance is comparable to the current generation of lithium-ion batteries. And it requires only a small adjustment to the production process.