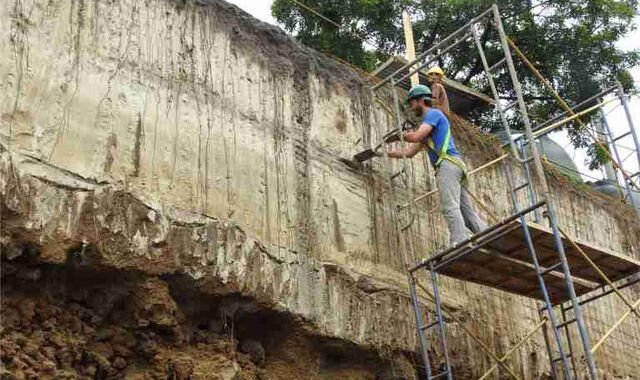 The Maya civilization flourished in its golden age when a volcano erupted on the southern edge of the Maya region, in what is now El Salvador. Tens of meters of ash and debris buried the densely populated, fertile agricultural valleys surrounding the Ilopango caldera. Aerosols blasted into the stratosphere by the eruption settled as far away as Greenland and Antarctica. Although the wider Maya civilization was largely untouched, it took a century and a half for life in the shadow of Ilopango to resume.

In a recent study, archaeologist Victoria Smith and her colleagues at the University of Oxford used growth rings from a stump caught in a pyroclastic flow, along with data from polar ice cores more than 7,000 km (4,300 miles) away. These dated the eruption to 431 CE, the early part of the Maya Classic Period. The date could help future archaeologists and climate researchers better understand the impact of the eruption on Central America and the rest of the world.

Volcanoes are dangerous neighbors, but despite the risks, they have ways of bringing people closer. Fertile volcanic soils in El Salvador’s valleys supported dense populations in Mayan villages and urban centers such as Chalchuapa. At the beginning of the Maya Classic Period, around 250 BCE, the rulers of Chalchuapa had built temples and a ball court on the site. Artifacts found among the ruins reveal trade connections as far as central Mexico.

The Classic Period is sometimes known as the golden age of the Mayan civilization, when the influence and power of culture expanded, cities grew larger and richer, and architecture and art flourished. But then Ilopango, the dormant volcano 10 km (6 miles) east of the Chalchuapa, roared to life.

When archaeologists began excavating the buried remains of Chalchuapa (located next to a modern city of the same name), they discovered that the materials from the Early Classic Period lay beneath a thick layer of white volcanic ash and pumice. The same layer of ash appears throughout the region in pale outcrops, so geologists named the eruption “Tierra Blanca Joven” after the “young white earth” it left behind.

Those deposits also told the story of the eruption. Smith and her colleagues measured the depth of the layers at 72 sites in the Ilopango area. They used that data to create a 3-D model of the ash and rock that Ilopango had thrown out and to simulate some aspects of the eruption.

Tierra Blanca Joven’s eruption sent a plume of ash and dust blasting 45 km (28 miles) into the air. Winds scattered the ashes over a wide swath of Central America and across the Pacific Ocean. Ash even fell over the Maya lowlands hundreds of miles to the north. Some of that ash, along with aerosol particles of sulfur and other chemicals, reached the upper layers of Earth’s atmosphere, where currents carried them nearly 7,800 km to the ice sheets of Greenland and Antarctica.

Closer to the volcano, the towering plume collapsed under its own weight, sending rapid, deadly streams of hot gas, ash and pumice — pyroclastic flows — raging across the ground for 50 km or more. A layer of ash and pumice up to 70 meters deep choked some of the valleys closest to the volcano, and a 2-meter layer covered hundreds of square miles of Mayan farmland.

But there is no doubt that the eruption was devastating. Around the same time as the Tierra Blanca Joven eruption, ceramics made in El Salvador no longer appear in the archaeological finds at Mayan sites. “We think the lack of ceramics production in the general area is because there were no people,” Smith told Ars, “because much of it was uninhabitable for years and it would have taken decades to restore the landscape.”

Wiggle matching and dating a disaster

A few hundred miles away, in the lowlands of Guatemala and Belize, people must have noticed the inches or so of ash that covered their homes, temples, streets and fields, but the Mayan heartland was spared the worst effects of Tierra Blanca Joven. The Maya expansion of the Classic Period continued despite the devastation around Ilopango. However, we don’t have enough evidence yet to say how the local disaster affected the wider trade networks of which Chalchuapa was a part or how all those aerosols in the stratosphere affected the global climate in the years following the eruption.

If you really want to understand the broader consequences of a volcanic eruption, you need to know when it happened in order to be able to say what happened next. But dating Tierra Blanca Joven was not easy. Radiocarbon dates on bits of wooden debris found in the pyroclastic layers could only narrow it down to somewhere between 270 and 562 CE. That covers almost the entire Maya Classic Period.

Smith and her colleagues found a mahogany stump (“slightly charred,” they note) mixed with the debris of a pyroclastic flow from the eruption. They radioactively dated some of its rings and then compared the year-over-year record of the tree’s age with the radiocarbon calibration curve generated from samples of known ages.

(This is done using a process called wiggle-matching. And then someone had to type the phrase “wiggle-matching” into a serious academic paper and submit it to the Proceedings of the National Academy of Science.)

Wiggle matching of the stump narrowed the eruption date to 425-440 CE. That was a range small enough to warrant a close look at ice sheets in core samples from Greenland and Antarctica, where Smith and her colleagues hoped to find signs of volcanic ash or a sudden surge of sulfur falling from the sky.

In a layer of Greenlandic ice dating to 431 CE, they found the ashes; the chemical composition of the small shards of glass matched the material spewed from Ilopango. The sulfur blasted into the stratosphere during the eruption took longer to get back to Earth; Smith and her colleagues found that in ice sheets dating back to 433 CE in samples from both Greenland and Antarctica. Those dates corresponded well with the archaeological evidence.

Smith and her colleagues estimate that Tierra Blanca Joven shot more sulfur into the atmosphere than the 1991 eruption of Mount Pinatubo in the Philippines, which cooled subtropical summers by about 1⁰C over the next few years. Sulfur compounds in the upper atmosphere reflect sunlight and keep parts of the atmosphere cooler during the summer; the effect lasts until the particles finally fall back to Earth, which can take up to a decade.

But despite the impressive volume of sulfur that Tierra Blanca Joven has pumped into the upper atmosphere, there is no evidence that it had a global or even regional impact on climate.

Smith and her colleagues say that based on their models, the eruption likely lowered summer temperatures in the Southern Hemisphere by about 0.5 C to 1 C “for a few years.” Normally, volcanoes in the tropics have a greater impact on the Northern Hemisphere thanks to prevailing atmospheric currents, but the volcano appears to have deposited higher concentrations of sulfur compounds in Antarctica than in Greenland. That suggests it cast its cooling shadow across the southern hemisphere.

“Unfortunately, there is too little well-dated paleoclimate proxy data for the Southern Hemisphere to verify the climatic effects of the eruption,” Smith and her colleagues wrote. Now that the eruption is dated, they say finding and analyzing ancient climate records from sources such as lakes and ocean sediments, ice cores, tree rings and cave formations could help understand how (or if) Tierra Blanca Joven’s climate in its aftermath.

Modeling ancient volcanic eruptions can help explain what happened in the past and also inform disaster preparedness today. That’s not a bad idea, given that Ilopango is still one of about 20 potentially active volcanoes in El Salvador alone. It’s been pretty quiet since the 1800’s, but we can’t count on it to stay that way.

Meanwhile, people have resettled the lands around Ilopango, and modern Chalchuapa is a vibrant community. It sits next to a cluster of pre-Colombian Mayan sites, including the Tazumal architectural complex, where Mayan elites built their pyramids, ball court, and other ceremonial structures just before Ilopango buried the city and surrounding lands.

About a century after the eruption of Tierra Blanca Joven, ceramics from El Salvador were back on the market in the Maya world, and excavations at Tazumal suggest the complex was back in use by the end of the Classic Period around 600 CE. It took a few more centuries for people to move elsewhere in 1200 CE.

In other words, the people of old El Salvador kept going even after a disaster. Eventually, they occupied and rebuilt a ruined city, replanted farms, and expanded a civilization. And even after the more widespread devastation of European colonialism, the Maya and their culture continue to live and thrive today. Humans are resilient in that way.

And that is perhaps the most important thing we can ever learn from the past.