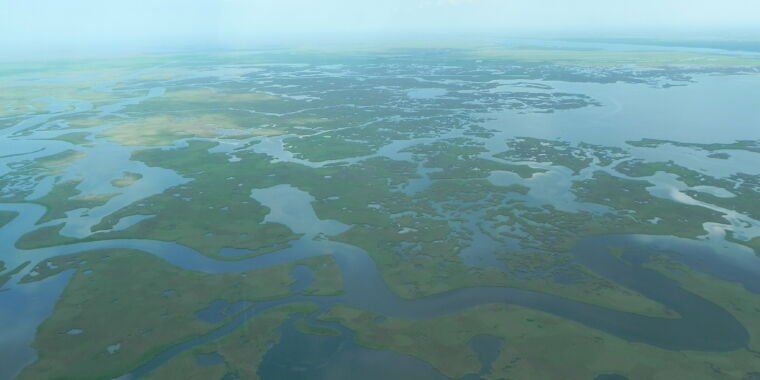 Since 1932, Louisiana coastal wetlands have declined about 25 percent. At its fastest, about one football field was lost every 34 minutes; at its slowest, every 100 minutes. The Pelican State is losing ground faster than any other state in the contiguous United States. And those losses extend far beyond the borders: the Louisiana coast plays a vital role in fishing, shipping and oil and gas production.

In recent years, the wetlands are doing better than in previous decades, possibly because there has been no Katrina-level storm during that time. But a study published last week in Science Advances suggests this is a temporary delay. With sea levels rising as fast as they are, the wetlands, including the famous Mississippi Delta, will likely be gone within a few decades — or at the most, centuries.

The Louisiana coast is currently home to 15,000 square miles of wetland, a critical ecosystem held together by a complex, interlocking series of processes. The tide is washing in; plants grow and die; sediment is supplied by rivers and builds up. If the system changes, for example if the sea level rises quickly, the swamp also changes.

As with many ecosystems, that change can happen gradually and then suddenly, geologist Torbjörn Törnqvist and his colleagues write. Ecosystems such as wetlands have some resilience as the environment becomes less ideal, adapting and surviving at the outer ends of their habitable range. But once a tipping point is reached, the ecosystem can quickly change states — open water can suddenly appear where swamp was previously.

Recent research has shown that swamps may be able to withstand rising sea levels. But these models use relatively short timescales — years or decades — in the historical data they use to make their predictions.

Looking further back, as Törnqvist and colleagues found, yields a very different answer. They drew on hundreds of sediment cores taken from the area — samples of mud extracted from the Earth and studied it to determine what types of materials were deposited over the centuries. Their samples allowed them to analyze the survival of the region’s swamps as early as 8,500 years ago.

They looked for clues that the area they sampled had signs that it had once been open water. For example, finding preserved samples of a type of mussel that lives in brackish water was a sign that the swamp had become an open water lagoon during that period. They then compared the history of swamps in the area with data on sea level rise.

Of course there are important differences between the swamps of thousands of years ago and the swamps of today. But many of those differences don’t work in our favor. For example, thanks to dams and other human intervention, the Mississippi washes less sediment into its delta than in a world without problematic human intervention. So the historical record doesn’t necessarily fit the present perfectly, but those differences make the future look more, not less, terrible.

Still, this doesn’t mean people should shrug and give up. There is still damage that can be mitigated, with different climate change scenarios associated with more and less drastic rates of sea level rise; the bottom of the range is still a death knell for the swamps, but it will last longer, giving us a cushion to get climate change under control. Louisiana is also responding to wetland loss with a program to divert sediments to strategic wetlands, which could help mitigate some of the worst human impacts and buy crucial decades.

With the conflicting conclusions of this and other studies, it’s important for researchers to collect more data — both from Louisiana’s swamps and other regions where sediments can be studied to understand how sea level rise affected wetlands.

But based on this evidence, Törnqvist and colleagues write, swamp drowning is inevitable. “This is a major threat,” they write, “not only to one of the most ecologically rich environments in the US, but also to the 1.2 million residents and associated economic assets that are surrounded by [Mississippi Delta] wetland.”