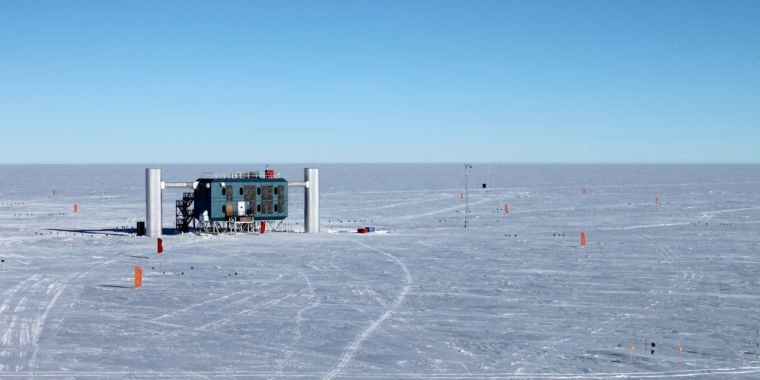 I’ve largely given up writing stories about new dark matter candidates. Theoretical physicists are coming up with more elaborate scenarios to make dark matter more interesting and less inert. It all seems a bit forced. About all dark matter needs to do is provide mass. A particle that doesn’t interact with electromagnetism at all fits in almost perfectly (and does practically nothing else).

But if there’s experimental data to back this up, I’m getting interested in dark matter candidates again. Aside from my cynicism, there are actually a few results hanging around that seem hard to explain. For example, the hydrogen in the early universe seems to have absorbed less light than expected. The center of the galaxy emits an unexpected amount of gamma rays (although they may be due to ordinary matter). And the neutrinos observed by the IceCube Neutrino Observatory in Antarctica also seem a little weird.

Of all these, a recent explanation for the IceCube data has caught my attention because it is fairly simple. This contrasts with a recent proposal for a Bose-Einstein dark matter condensate to explain the lack of hydrogen absorption, which appears horribly complex.

IceCube is a huge neutrino detector in Antarctica. It’s been watching the high-energy neutrinos coming from outside the galaxy for a while now. The neutrinos are detected in two different ways: through the trail they leave in the detector and through the cascade of luminescent particles they generate when they collide with the ice.

These two measurements do not seem to match at the very highest energies. Neutrinos come in three flavors — electron neutrinos, muon neutrinos, and tau neutrinos — and a single neutrino will oscillate between these identities as they travel. Models predict that due to the enormous distances the neutrinos have traveled, there should be equal numbers of the different neutrinos. But IceCube sees many more electron neutrinos than expected.

To explain this discrepancy, a few theorists have proposed an invisible neutrino decay path. In this case, one or two of the flavors of neutrino decay into a particle called a majoron. The majoron is one of a zoo of proposed dark matter particles. It now has two roles: it provides the neutrino with mass, and it is created by tau and muon neutrinos as they decay. This is a bit of a double win because the evidence that neutrinos have mass is now quite strong, such as from the taste fluctuations of atmospheric neutrinos.

The nice thing about this model is that it actually explains an experimental discrepancy that gets pretty solid – the signal surplus from electron neutrinos right now has about a one in 10,000 chance of being an accident. It’s also nice that the data is explained by a fairly minimal change: one dark matter particle of a sort that seems fairly well motivated by experimental data.

The researchers also discuss the need for more data. The IceCube data set will need to grow larger so that we can be sure that the excess of electron neutrinos is real. (In addition, another source of data would be fine.) The problem is that there are no other sources of high-energy neutrinos or large detectors to capture them, so it may be a while before we can confirm anything unusual about the sources or detectors.