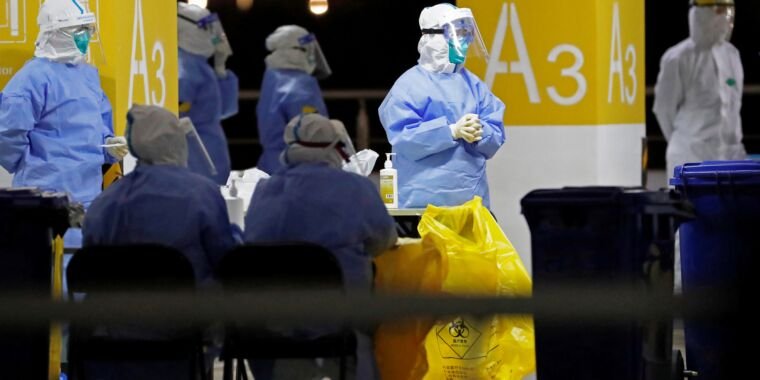 Nearly 18,000 workers were locked up at Shanghai’s main airport on Sunday and tested for COVID-19 overnight after authorities discovered seven cases linked to the facility’s freight unit.

On Monday morning, the local authorities had the situation under control, tweet videos of 17,719 workers in orderly rows waiting to be tested, with quiet piano music playing in the background. According to The Washington Post, it remained unclear after that what happened to the workers: whether they were still being held at the airport, whether they were transferred to a quarantine facility or whether they were allowed to go home.

Local authorities reported that at least 11,544 have tested negative.

The lock-in and test blitz was urged after a seventh case was identified and linked to the loading unit. The first identified case was in a freight worker who tested positive on Nov. 9 after checking into a hospital with a fever, fatigue and nasal congestion. His colleague tested positive the next day.

In the past three days — two weeks after those first two cases — five more cases have surfaced. The five include a freight handler, that employee’s wife, two other co-workers and the wife of one of those co-workers.

According to the South China Post, one of the most recent cases is an employee of UPS’s international transit center at Pudong Airport.

In a news conference Monday, local authorities said they believed the first two cases became infected while they were cleaning a cargo container from North America together on Oct. 30, without wearing masks.

“The environment in the container is humid, which is conducive to the survival of the coronavirus,” said Sun Xiaodong, deputy director of the Shanghai Center for Disease Control and Prevention. Sun added that authorities had ruled out other transmission risks.

Hundreds of flights to the airport have been canceled since yesterday’s test race.

Zhou Junlong, vice president of the Shanghai Airport Group, said airport staff will have access to experimental vaccines approved in China for emergency use in the future.