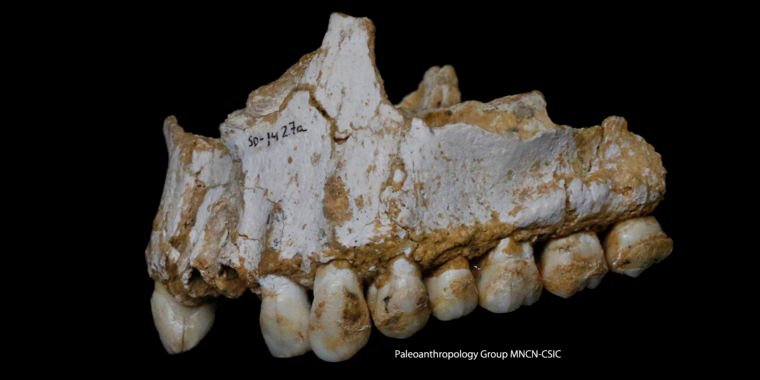 About 50,000 years ago, a Neanderthal in Spain had a toothache and took the botanical version of an aspirin. Could be. Although far from clear, there is evidence of ancient teeth pointing to the possibility.

It’s part of a study of the diet of the Neanderthals, thanks to their poor oral hygiene. Published in Nature, an analysis of preserved dental plaque from three different Neanderthals provides an intriguing glimpse into what they put in their mouths. According to the authors, the analysis points to regionally varied diets and suggests the possible use of medicinal plants.

But some of the DNA evidence is a bit strange, suggesting evidence of species where they really shouldn’t have been 50,000 years ago. There are some good explanations for why this might happen, but as with most exciting results, drawing conclusions from the evidence requires some caution.

The stereotypical image of Neanderthals portrays them as hunting the woolly mammoth. There is evidence for a Neanderthal diet “as carnivorous as polar bears or wolves,” the researchers write: Archaeological and chemical data suggest meals heavy for large herbivores such as reindeer, woolly mammoths, and woolly rhinoceroses.

But Neanderthal teeth tell a more nuanced story. Previous research has shown that the wear patterns on their teeth indicate a varied diet with regional variations. And plaque has been used before to analyze the starches and proteins that were preserved in the plaque. These analyzes suggest that Neanderthals ate many plants, possibly including medicinal plants.

But plaque can retain more than simple chemicals; genetic material from the food can be wrapped in it. This allowed a team of researchers, led by Laura Weyrich of the University of Adelaide, to look in incredible detail at what plant and animal species ate three individual Neanderthals. Two came from El Sidrón cave in Spain, including the would-be aspirin popper, while one came from Spy Cave in Belgium.

The results add to previous evidence suggesting that the “Neanderthal diet” was actually made up of many different things, depending on where the Neanderthals in question lived. The Belgian followed the meat-heavy pattern, with genetic material from woolly rhinoceros, mushrooms and wild sheep showing up in the dental plaque. Mammoth, reindeer, rhinoceros and horse bones in the cave tell the same story as the dental plaque: these were hunters.

The Spanish Neanderthals, on the other hand, seemed to eat mostly mushrooms, pine nuts and moss – the kind of food you’d get if you foraged in a forest. One of them had a tooth abscess, and this person’s teeth came with the genome of a poplar with a high content of salicylic acid, the active ingredient of aspirin.

Here it gets a little slippery. The species identified, Populus trichocarpa, is actually native to North America. It wouldn’t have been present in Europe 50,000 years ago, says Quentin Cronk, a botanist with an interest in the poplar genome, who was not the author of this paper. But it does have a fairly close relative in Europe, Populus nigra.

What’s going on here, says longtime DNA researcher Hannes Schroeder, could be two things. The first possibility is contamination. However, the authors paid attention to this and deleted the data from two other Neanderthals because there was evidence of contamination. The DNA they finally analyzed showed all signs of being quite old. The other possibility is that because ancient DNA has broken down and it’s possible to analyze only short strands of it, the strands left behind in the plaque matched more than one poplar species.

As it happens, Populus trichocarpa has the best available genome data among poplars. Good genome sequencing data is also available for all other identified tree and mushroom species – including another oddity, the Korean pine. This suggests that the small bits of DNA matched the genomes available in genetic databases and were just stuck on whatever species happened to be in the databases because they didn’t have enough data in them to differentiate between different species.

“The most likely explanation for this problem is that the reads come from a European species Poplar that is not sufficiently represented in current sequence databases,” says Daniel Huson, one of the paper’s authors. Cronk agrees that this is likely, as does Schroeder.

It is a bit strange for the authors to point to a single, impossible species, instead of identifying the genetic remains as belonging to the Poplar sex. It doesn’t pose too much of a problem for evidence of what Neanderthals ate, though: mushrooms are mushrooms. A difference in species does not change the evidence that these people ate as vegans rather than Texans.

As for the medicinal claim, there are also indications for that Populus nigra have medicinal properties. Whether or not Neanderthals knew about these traits while eating poplar is another and possibly unanswerable question. Some other primate species seem to do this, so it may not be as far-fetched as it seems.

To Schroeder, the evidence doesn’t seem like a particularly solid basis for a big claim as a medicinal use. But Keith Dobney, one of the authors of the article, thinks it’s all so true that it invites interpretation of medicinal use. The person with the abscess also had bacteria associated with diarrhea, as well as evidence of the antibiotic Penicillium fungus, and “it just seems like a bit of a strange coincidence that we have one person with all of these things,” he says.

They found that there were different groups of oral microbiomes: Spanish Neanderthals grouped with chimpanzees and ancient African foragers, in what the researchers called a group of “foragers” with a largely vegetarian diet. The Belgian Neanderthal more closely adhered to the typical meat-rich hunter-gatherer diet. A modern human and an early agricultural human also had different profiles.

The result helps us understand modern human oral microbiomes in context, says Dobney. Our current food-related health problems, such as obesity, did not arise in a vacuum: “it didn’t happen overnight; it’s part of the journey we’ve been on for thousands of years. Major cultural changes, such as the beginning of agriculture, still affect our health.”

As for the Neanderthals, he hopes evidence of their important place in our own history – in terms of behavior, genome and microbiome – can help end the common perception of them as “those knuckle-dragging cavemen who don’t have much than a strange buffalo here and there.” The evidence points to varied behavior in Neanderthals, and we are beginning to draw closer to conclusions about the sophistication of their behavior and culture.