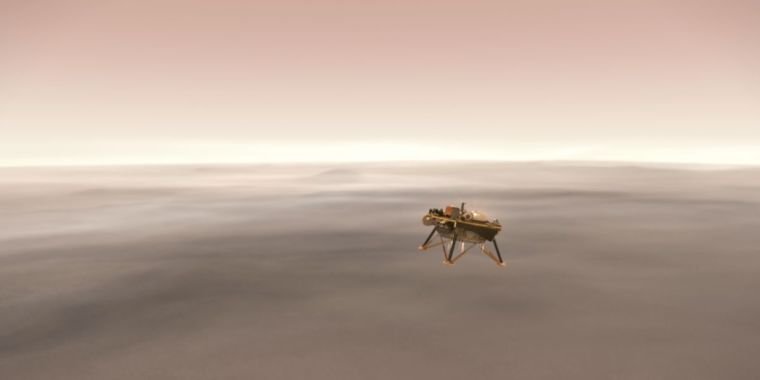 NASA launched the InSight probe to Mars in early May and now it’s time for the most critical part of the mission: entry, descent and landing on the surface of the Red Planet. The probe will attempt to land on Monday, November 26, at around 3 p.m. ET (20:00 UTC).

No landing on Mars is easy. Only about 40 percent of the landers and rovers sent to the Red Planet in the past five decades have ever made it to the surface safely, and of the international space agencies that have tried, only NASA has managed to make a soft landing on Mars. to make .

For InSight, however, mission managers are a little more confident than usual. This is because the powered descent mode that InSight will use was previously tested, ten years ago with the Phoenix lander. That spacecraft landed at Mars’ north pole, studied the planet’s water cycle and even observed snowfall.

On Monday, InSight will follow a similar trajectory, entering the Martian atmosphere at an altitude of 125 km and relying on a combination of heat shield, parachutes and onboard engines to reduce heating and slow the speed from nearly 20,000 km/h to about 10 km/h. km/h – a factor of 2000 – before its three spindly landing legs hit the surface of Mars.

“Certainly, there are always some things that can go wrong,” said Stu Spath, Lockheed Martin InSight program manager and director of Deep Space Exploration. Lockheed was the prime contractor for the entire spacecraft, including the landing system. “Landing on another planetary body is, in my opinion, one of the toughest things we do in our field.”

InSight will land near the equator, in western Elysium Planitia, about 600 km north of where the Curiosity rover is currently located. From NASA’s Mars Reconnaissance Orbiter, engineers have a pretty good handle on the abundance of rocks in the landing area, which is quite low, so they don’t expect InSight to fall on a boulder. And while it’s dust storm season on Mars, there aren’t any dust storms raging over the surface right now.

NASA and Lockheed engineers won’t know right away if the spacecraft made it to the surface safely — there is currently an 8.1-minute delay to Earth-Mars communications. On Monday afternoon, two CubeSats launched with InSight, MarCO-A and -B, will relay real-time landing data. However, they are experimental and NASA is not counting on this data.

As a backup system, InSight sends one of the two tones via a UHF signal to Earth immediately after landing. One of those signals means that everything is nominal, and the other means that the spacecraft has landed, but is in “safe” mode for some reason. (Of course, if no signal is received, that would be very bad).

Meanwhile, the Mars Reconnaissance Orbiter will record InSight’s entry, descent and landing in real time, but because of planetary dynamics, that spacecraft won’t relay that information back to Earth for about three hours. This gives detailed information about the landing. About six hours after landing, Earth engineers will perform their first real-time relay with InSight, sending data and commands back and forth via the Mars Odyssey spacecraft also orbiting the Red Planet.