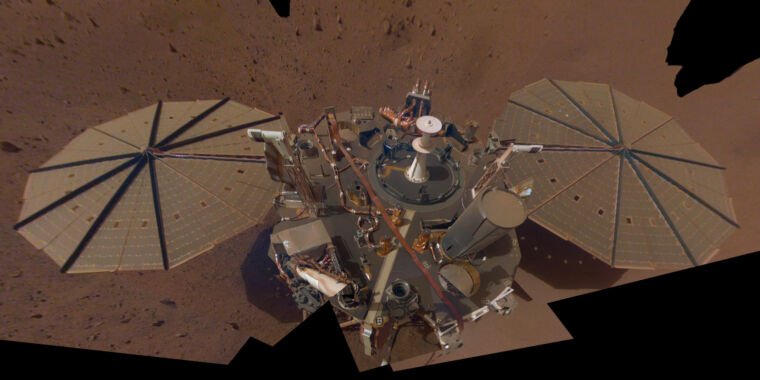 NASA announced today that it is giving up its efforts to place a temperature sensor several meters below the surface of Mars. As part of the agency’s InSight lander, the hardware had to be placed deep enough to avoid the influence of Mars’ weather, seasons and daily temperature changes. But due to the unusual conditions at the landing site, the hardware never got below the surface.

The InSight lander carried several instruments intended to provide a clearer picture of Mars’ geology. One of those instruments, the SEIS seismometer, has successfully monitored Marsquakes to gain a better perspective on the structure of Mars and its local composition below the surface near the landing site. A second measures the wobble of Mars’ axis of rotation, which will be affected by a combination of the red planet’s composition and the gravitational influences of the rest of the solar system.

InSight’s other big experiment is the Heat Flow and Physical Properties Package, or HP3† While previous landers hadn’t placed hardware deeper than about eight inches, HP3 was designed to operate several meters below the surface of Mars. From there, the surface fluctuations would be averaged out slightly, and HP3 was able to measure the flow of heat from the interior of Mars to the surface. This would allow an estimate of the energy left in the core of Mars through a combination of its formation and radioactivity, a key element in understanding what geological activity is still possible there.

However, a 3-meter drill wouldn’t fit neatly on a lander. So HP3 had to be brought to its working depth by a device called ‘the mole’. The mole is designed to drive the hardware below the surface by taking advantage of the friction between the mole and the Martian floor; it would anchor itself, drive a part of itself deeper with that anchor, and then crawl forward and repeat the process.

But this plan turned out to have a problem: the ground didn’t allow enough friction for this to work. Now, after nearly a year of trying and a huge variety of troubleshooting techniques, the mission managers are accepting that the plan just isn’t going to work. This comes after the final attempt, where a robot shovel on InSight was used to pile soil on top of the mole and try to push it down to gain more leverage.

It obviously didn’t work out because the soil properties at the InSight landing site were different from expectations inferred elsewhere on Mars. So in that sense we learned something from the experience. And InSight’s remaining instruments will continue to work as planned. But we will have to wait for another lander to measure the temperature of Mars.