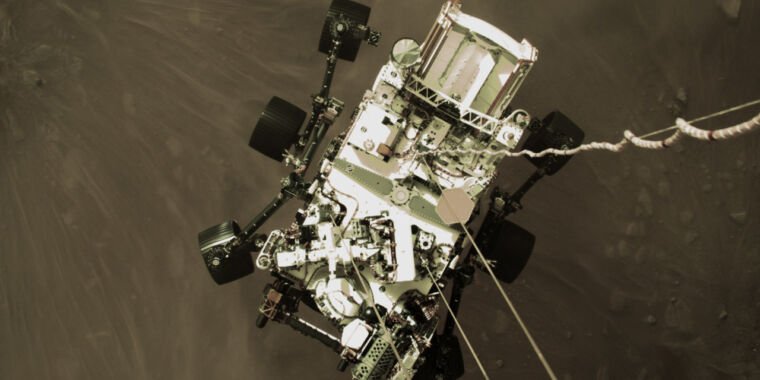 NASA released new images Friday of its Perseverance spacecraft approaching the surface of Mars and settling safely on the red planet.

The new photos feature an arresting image of the jeep-sized rover approaching Mars, seemingly dangling from the overhead crane that lowered it to the surface about 7 meters below. This image comes from footage of the rover’s landing, captured by onboard cameras. A complete video of the dramatic landing sequence could be released as early as Monday after NASA engineers receive more data from Mars.

“It’s exciting. It’s absolutely exciting,” said Adam Steltzner, the chief engineer of the Perseverance mission, which successfully landed on Mars on Thursday. These kinds of dramatic images, he said, help take the world for the ride on reconnaissance missions.

“These things are hard,” he said of building a large rover and bringing it to the surface of Mars. “It takes thousands of people years of effort. It represents a huge human elevator for this to happen. With that image and the details in it, it really pulls us humans on Earth to the result of that work.”

Steltzner said a preliminary review of the seven-minute landing sequence appeared to run smoothly, but engineers will look deeper into the data in the coming weeks. “Yesterday went as smoothly as we could have wished for,” he said. “We’ll use a fine-tooth comb and look for any anomalies that could teach us how to do our job better in the future. But we didn’t see any big ones yesterday that caught our eye.”

With the landing complete, the mission’s scientists and engineers will now focus on checking the status of the rover — which appears to be completely healthy so far — and begin turning on its myriad of scientific instruments. Perseverance landed about 2 km from an ancient delta that scientists want to examine for signs of ancient life, and the rover could start moving there in about eight Martian days.

Scientists are already finding things to get excited about in the first images of Perseverance. For example, a technical shot taken to assess the vehicle’s wheels showed curious-looking rocks in the background. “The science team is already thinking a lot about this,” said Hallie Gengl, head of instrument data systems at the Multimission Image-Processing Laboratory at NASA’s Jet Propulsion Laboratory.

As for the mission’s helicopter, ingenuity, engineers want to gather more information about the local weather on Mars before the vehicle makes its maiden flight. That won’t happen for at least 60 days on the surface of Mars.

We eagerly await that and more.