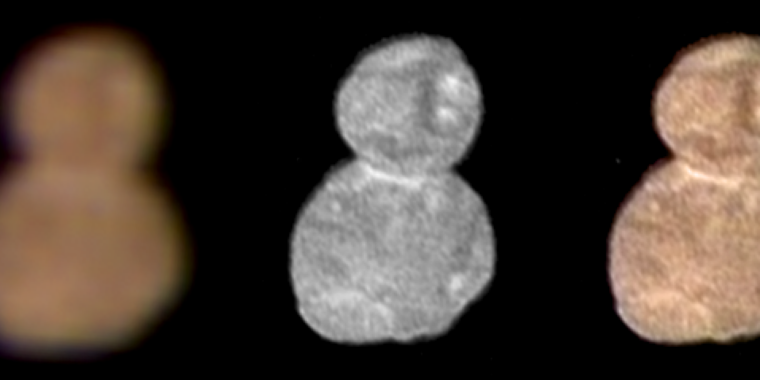 After the New Horizons mission zoomed in on the then-unknown Ultima Thule object in the outer solar system early on New Year’s Day, the spacecraft began sending data back to Earth through a deep-space network. While only about 1 percent of that data is now on the ground, scientists were able to share some of the top findings on Wednesday.

What they found at a distance of 44 astronomical units (AU) from Earth, or 44 times the distance between Earth and the Sun, is something of a wonderland. The Ultima Thule object, formally named 2014 MU69, is a 33 km long contact binary that somewhat resembles a snowman. Each of the two components is nearly spherical and comes together in a “neck,” and this has proven important for confirming scientific ideas about how the planets and moons of the solar system formed. Overall, the object has a reddish hue, similar to the north pole of Pluto’s moon Charon.

With Ultima Thule, the astronomers behind the New Horizons mission say they have discovered a pristine planetesimal — a small object that served as a building block for larger objects in the solar system. In the early years of the solar system, some 4.5 billion years ago, a large, congested disk of these planetesimals came together to form the planets and moons we now recognize in the inner solar system.

But in the outer solar system (and especially in the Kuiper belt that lies outside Neptune’s orbit), there were fewer of these planetesimals to spread out over a much wider area. So some of them, like Ultima Thule, are remnants of the first few million years of the solar system. “This may be the most primitive object seen by a spacecraft, and the oldest to be seen anywhere in the solar system,” Jeff Moore, who leads the New Horizons spacecraft’s geology team, said at a news conference on Wednesday.

Based on Ultima Thule’s shape and appearance, scientists believe it was formed by the very slow accretion of two bodies. Over the millennia, the bodies spiraled glacially inward, perhaps at speeds as low as 2–3 km per hour relative to each other. They are bound by gravity.

The data revealed on Wednesday is quite remarkable, given that Ultima Thule was only discovered in the summer of 2014 and scientists had to photograph the object as they traveled by it at a speed of 51,500 km/h. It’s only about the size of Washington, DC, lit by sunshine 1900 times fainter than Earth’s surface, and it has the reflection of potting soil.

“What this spacecraft and team have done is unprecedented,” said Alan Stern, the mission’s principal investigator.

And New Horizons isn’t finished yet. More data is now coming in that will describe Ultima Thule’s composition, and more and better images are coming. The best photos released so far have a resolution of about 140 meters per pixel and were taken from a distance of 50,000 km. Astronomers hope to get images with a resolution of up to 35 meters per pixel, Stern said.

He is also hopeful that the spacecraft will receive extra money for a third flight – it has already collected extraordinary data on Pluto and now Ultima Thule. New Horizons has 15 to 20 years of power and fuel, he said. The Kuiper Belt extends to about 70 AU, and at the current rate, New Horizons will spend about a decade in it.

This provides enough time to discover an additional object of interest along or near New Horizons’ path, Stern said. The mission team will submit a bid to NASA next year, and if the space agency approves, the astronomers will work with telescope observation teams to find another noteworthy Kuiper Belt object. The Johns Hopkins Applied Physics Laboratory designed, built and operates the New Horizons spacecraft and manages the mission for NASA’s Science Mission Directorate.