NASA pays the price of being subjected to a massive, expensive rocket | Techilink 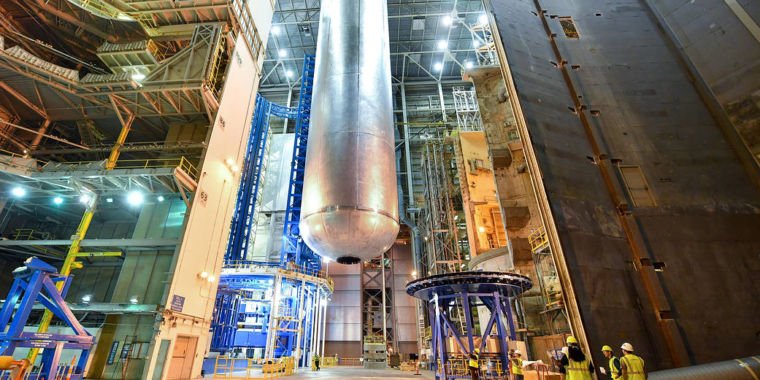 After Donald Trump took office in January, his advisers asked NASA to consider the possibility of a smashing performance during the president’s first term. Shortly thereafter, the space agency announced that it had begun studying the possibility of adding crew members to the first launch of the Space Launch System (SLS) rocket.

This seemed like an ambitious question for 2019. Not only was the agency already struggling to meet the November 2018 deadline for a unscrewed test flight of the SLS rocket and Orion spacecraft, few of the life support systems needed to keep crew members alive during spaceflight were scheduled to be ready before 2021. It is also rare to see crew launches on the first flight of a rocket, as engineers like to have confidence in their launch system before adding people.

On Friday afternoon, the agency’s acting administrator, Robert Lightfoot, and chief of human spaceflight, William Gerstenmaier, announced that NASA had completed the investigation. And while it was technically feasible to put the crew on the first SLS launch, it would cost $600 million to $900 million over the existing budget, and it wouldn’t appreciably advance the agency’s long-term goals for deep spaceflight. “We’re in this for the long haul and we want to make sure we focus on that,” Lightfoot said on a conference call with reporters.

Under political pressure, NASA therefore opted for caution. But the apparently shrewd short-term decision to hold off the crew from the first flight of the SLS rocket failed to mask a larger political problem that NASA had been grappling with for nearly the entire decade. Simply put, it’s been tasked with building a massive, complicated rocket that it can’t really afford.

The SLS missile saw the light of day in 2010 when President Obama signed the Budget Authorization Act into law in October. In doing so, the president bowed to the will of Congress, and more specifically the US Senate, which wanted NASA to build a large rocket. However, after that legislation was signed into law, NASA engineers and their consultants began studying the rocket and how best to build it. What they found is that the SLS missile would not fit within the agency’s budget and the cost would be too high for the agency.

In particular, an August 2011 analysis by the consulting firm Booz Allen Hamilton offered a stark warning of rosy SLS cost estimates. “There are many instances of unwarranted cost-cutting in program estimates,” the analysis said. “This exposes the programs to cost risks and undermines the credibility of the estimate.” This would inevitably lead to delays and force NASA to cut all funding that would go towards payloads to fly the rocket.

In 2011, as NASA officials pushed back on these budget issues with congressional aides, Sen. Kay Bailey Hutchison, a Republican from Texas, had a message for the agency’s chief financial officer, Beth Robinson: Don’t worry about the money — I’ll get it to you money. However, Hutchison would leave the Senate about a year later.

By then, other senators had taken up the cause. These included Richard Shelby of Alabama, whose home state of Marshall Space Flight Center was in charge of the rocket program and who was beginning to see the value of the program for local jobs. Thanks to his support and others, the rocket regularly received big “plus-ups” in the NASA budget over what the president had provided for building rockets. (Typically, the president’s budget provided about $1.3 billion annually, and Congress allocated $2 billion to the SLS.) But this still wasn’t enough.

Even with the additional funding, the unfortunate outcome of these decisions has become apparent to NASA. On Friday, agency officials confirmed that not only would the crew not fly on the rocket’s first mission, but the first launch date would also be delayed — again. The original NASA authorization law that created the rocket in 2010 required the agency to launch the rocket and Orion before Dec. 31, 2016. That date was in 2017, and in recent years NASA has focused on September to November 2018. .

Now NASA says the launch won’t happen before 2019, but the agency will need another month or two to finalize a 2019 date. (Ars has heard from two sources that the most likely time frame will be November 2019 for the unmanned launch of the rocket and spacecraft.)

During the conference call, Ars asked Gerstenmaier to step back and take a big look at the SLS missile. How could the agency, even with all the funding — about $10 billion through next year — miss its original deadline by as much as three years, if not more?

“I don’t know,” Gerstenmaier replied. “I don’t know — I would just say it’s really kind of the complexity of what we’re trying to do, and to build these systems. We weren’t pushing to cutting-edge technology, like main engines sitting under the rocket or new solid rocket boosters But we’ve been busy with a lot of new production, and I think new production has caused some of the delays that we’ve seen. Nobody bothers the way we’re welding material thicknesses that we’re welding.”

He also cited problems with the Orion spacecraft service module provided by the European Space Agency, tornado damage at NASA’s Michoud Assembly Facility in Louisiana, and other causes of delays. But in the end it’s just a big rocket that takes a lot of time and money to build. “Again, I think when you look at the amount of work we’ve done, it’s pretty phenomenal overall, and that’s caused some delays,” said Gerstenmaier.

Later, NASA officials were questioned about private companies such as SpaceX and Blue Origin, which also build heavy rockets, but at a very limited cost to taxpayers. What would they have to say about simply buying those vehicles off the shelf, at a significantly lower cost than an SLS launch, and keeping NASA’s funds to conduct space missions?

Lightfoot replied that he welcomed commercial participation in NASA’s journey back to deep space, near the moon, and then possibly to Mars. “I’ve been saying for a while that this is an ‘and’ proposition; it’s not an ‘or’ proposition,” he said. “If you look at what we’re trying to do, we’re going to need both. Honestly, it’s going to take all of us to get this done.”

That may well be so, but the latest delay of the SLS rocket raises the clear possibility that not only will SpaceX’s Falcon Heavy rocket fly well ahead of its first SLS launch, but that Blue Origin’s New Glenn heavy vehicle will also fly. . If these privately owned launch vehicles are viable even before the NASA vehicle enters service, it could raise new questions about the need for the government’s own gold-plated capability.