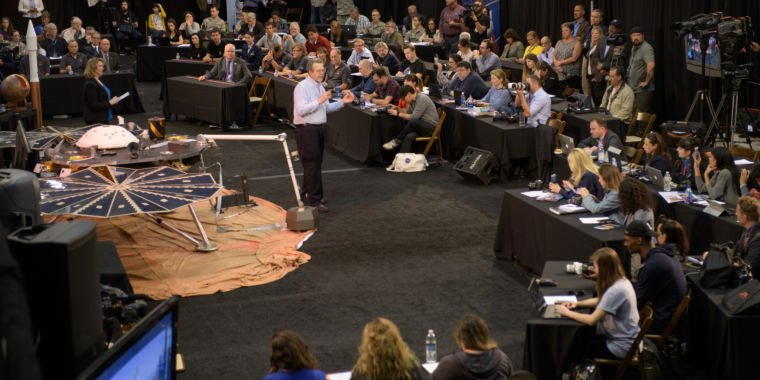 Weather permitting, NASA will send its first spacecraft to Mars since 2013. The InSight mission, designed to study the interior of the Red Planet, is the agency’s first Mars lander — a stationary vehicle in contrast. to a rover – since the Phoenix spacecraft landed on Mars in 2008.

We assume that everything on a mission like this will work. NASA really makes it look easy: The last eight rovers, landers, and orbiters it sent to Mars have all pretty much met or exceeded expectations. But the road to Mars is littered with dozens of failures.

In fact, no other country has ever landed anything on the surface of Mars that survived for more than a few seconds. So with the world’s varying successes, here’s a look at a few potential pitfalls InSight must avoid before it can burrow 5 meters into Mars and study the planet’s interior in depth for the first time.

For many missions, the rocket launch is the most dangerous part of the whole undertaking, because sometimes rockets all explode. For InSight, this may be less of a concern as the spacecraft will launch on arguably the most reliable rocket in the world, the Atlas V booster. A two-hour launch window will open Saturday at 4:05 a.m. PT (11:05 a.m. UTC). Dense fog is a weather problem, but officials have indicated that the Atlas V is likely to launch anyway.

The novelty with Saturday’s launch is that it will take place from Vandenberg Air Force Base on the west coast, north of Los Angeles. An interplanetary mission has never been launched from the west coast of the United States, because from an orbital mechanics point of view, it is more advantageous to launch straight east from Florida, with the Earth’s rotation.

However, InSight is a smaller spacecraft, with a launch mass of 721 kg. The Atlas V rocket, manufactured by United Launch Alliance, has more than enough power to get the spacecraft on a good Mars trajectory by launching south from Vandenberg, across the Pacific Ocean. It doesn’t even need one of the solid rocket boosters that can be attached to the rocket for an extra kick off the launch pad.

So why doesn’t InSight just launch from Florida? The reason is that the east coast “range” is more congested with upcoming launches this month, including two by SpaceX. InSight has a daily launch window until June 8, 2018 to get off the ground.

After a six-month cruise to Mars, InSight should arrive on the Red Planet in November. Currently, NASA plans to attempt to land InSight on Mars on November 26, or the “Black Monday” after Thanksgiving. A scientist joked during a series of briefings on Thursday that the public can watch the landing while shopping online.

The last time NASA attempted to land a spacecraft on Mars was in 2011 with the Curiosity rover. For that understandably hyped landing, NASA used a never-before-tried skycrane system because Curiosity had a landing mass of about 1 ton. InSight is a significantly smaller vehicle with a landing mass only a little over a third that of Curiosity, so theoretically it should be easier to get to the surface.

It also has a family tree. The InSight lander builds on the design of NASA’s Mars Phoenix lander, which landed in 2008. It will use a combination of parachutes and then 12 descent engines to decelerate from an atmospheric input speed of 6.3 km/second. Still, since Mars is littered with failed landers, we’ll be thanking (hopefully) a few days later than usual this year.

Finally, the spacecraft must operate once it reaches the ground. After landing, InSight will spend approximately two months slowly deploying and testing its 2.4-meter robotic arm and scientific instruments. It will then begin its scientific activities. The heat probe is planned to be deployed about 17 weeks after landing and begin digging in the Martian soil. The first mission will last approximately two years.

It is by no means certain that InSight will work as it brings some brand new technologies to the surface of another world. NASA originally planned to launch the spacecraft two years ago, before engineers discovered problems with the spacecraft’s seismometer system.

The seismometer itself worked fine, but several times in 2015, engineers found a leak in the 22 cm sphere that creates a vacuum so that the instrument can function on the rough surface of Mars. Their workarounds did not solve the problem. NASA now says the problem has been resolved.

In any case, there will be no way to solve a significant problem with the seismometer — or the burrowing probe, for that matter — once InSight is on Mars. So if everything works with the launch, landing and science operations, don’t think it was because it was easy. Millions of hours of work have gone into ensuring success, for which we have to pay tribute to NASA, the spacecraft contractor Lockheed Martin, United Launch Alliance and the dozens of other important contributors. (Because if something goes wrong, they will surely be blamed).