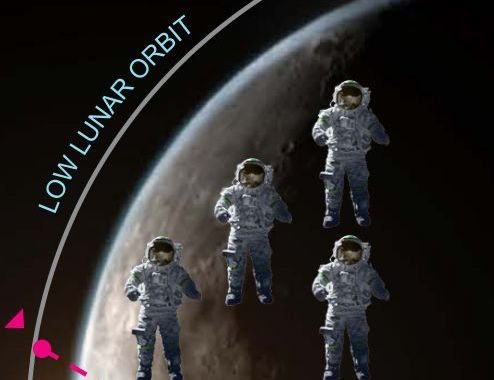 For two years, the Trump administration has made various noises about returning humans to the moon. Bills have been signed with Apollo astronauts such as Buzz Aldrin and Harrison Schmitt. Vice President Mike Pence has traveled to NASA facilities across the country to deliver speeches. And the president himself has mused on the moon and Mars.

But aside from talking about returning humans to the moon, much of the country’s civilian space policy and budgeting priorities hadn’t changed much until late last week. On Thursday, NASA released a wide-ranging announcement asking the U.S. aerospace industry for help developing large landers that would take astronauts to the moon’s surface as early as 2028.

The new documents contain a wealth of details about how the agency expects to send humans back to the moon with what it calls a “human landing system.” This activity, the documents say, “will re-establish US superiority around and on the moon. NASA plans to develop a series of increasingly complex missions to the lunar surface, using commercial participation to strengthen US leadership.”

Private companies have been eagerly awaiting this request since the Trump administration announced its return to the moon. Not only will longtime NASA partners like Lockheed Martin, Boeing and Northrop Grumman almost certainly provide, but larger new space companies like SpaceX and Blue Origin are likely to. Some of the lesser-known companies planning smaller science landers, including Intuitive Machines, Astrobotic and Moon Express, may also aim to build larger vehicles in the next decade.

As part of this Phase A offering, NASA says it will award “multiple prizes” worth between $300,000 and $9 million to various companies. Sources say they expect six to eight awards for these six-month studies to identify designs for potential vehicles. Companies can bid on one or all three elements of NASA’s proposed landing system: a Transfer vehicle that will take astronauts to and from the Lunar Gateway to low lunar orbit, a Descent vehicle that will bring people to the surface, and an Ascent vehicle. that will take the crew back to lunar orbit.

After Phase A, NASA says it will select “zero, one, or two” awards for design and development and that such fixed-price contracts will be valued at “several hundreds of millions of dollars.” Since the element “Descent” is expected to fly first, NASA says such proposals are “expected to receive a majority of the total funding.” The participating companies are expected to share the costs with NASA, meaning they will have to invest about 20 percent of their own money in developing the lander.

NASA will hold an “Industry Day” Thursday in Washington, DC, to answer questions about these requests. While this wasn’t unexpected, it’s nonetheless significant that the agency is now making progress on its plans to actually put humans on the moon, with unmanned demonstration missions arriving as early as 2024.

This doesn’t mean the space agency will actually return to the moon. In 2008, as part of the Constellation program, NASA signed contracts with five potential suppliers to design the “Altair” lander that would send humans back to the moon, but that program was subsequently canceled by President Obama in 2010 because it was behind schedule. and significantly over budget.

This time, however, there seems to be more agreement among both NASA and the wider spaceflight community that it’s time for humans to move beyond low Earth orbit and that a significant part of that evolution will involve human landings on the moon. Not only are there water resources, but private companies are interested in helping and investing their own capital. Finally, there is the understanding that China is going to the moon, probably around 2030, and if NASA were to avoid the lunar surface, it could relinquish supremacy there to its emerging rival.