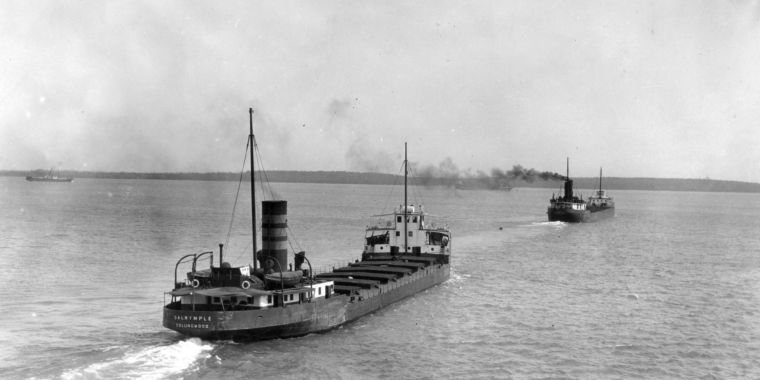 Think of a dangerous cargo, and you can think of toxic waste or explosives. But granular cargoes such as crushed ore and mineral sand are responsible for the loss of countless ships each year. Over the past ten years, an average of 10 “solid bulk cargo” carriers per year have been lost at sea.

Solid bulk cargoes — defined as granular materials loaded directly into a ship’s hold — can suddenly change from solid state to liquid state, a process known as liquefaction. And this could spell disaster for any ship that carries them — and its crew.

In 2015, the 56,000-tonne bulk carrier Bulk Jupiter sank quickly about 300 km southwest of Vietnam, with only one of the 19 crew members surviving. This led to warnings from the International Maritime Organization about the possible liquefaction of the relatively new solid bulk cargo bauxite (an aluminum ore).

Much is known about the physics of liquefying granular materials from geotechnics and earthquake engineering. Due to the vigorous shaking of the earth, the pressure in the groundwater increases to such a level that the soil becomes “liquid”. But despite our understanding of this phenomenon (and the guidelines in force to prevent it), it still causes ships to sink and their crews with them.

A solid bulk cargo that appears stable on the quay can become liquid due to pressure in the water between the particles when it is loaded onto the ship. This is especially likely if, as is common practice, the cargo is loaded from the quayside into the hold using a conveyor belt, which can cause a fall from considerable height. The vibrations and movements of the ship from the engine and the sea during the voyage can also increase the water pressure and lead to the liquefaction of the cargo.

When a solid bulk cargo liquefies, it can slide or slosh in a ship’s hold, making the ship less stable. A liquefied cargo can slide completely to one side of the hold. If it regains its strength and returns to a solid state, the cargo will remain in the shifted position and cause the ship to tip over (or “frame”) permanently in the water. The charge can then liquefy again and slide further, increasing the angle of inclination.

At some point, the angle of inclination becomes so great that water enters the hull through the hatches, or the vessel is no longer stable enough to recover from the rolling motion caused by the waves. Water can also flow from the cargo to the surface as a result of the liquefaction and the subsequent sloshing of this free water can further affect the stability of the ship. If the sloshing cannot be stopped, the ship is in danger of sinking.

The International Maritime Organization has codes that determine how much moisture is allowed in solid bulk cargo to prevent liquefaction. So why is it still happening?

The technical answer is that the existing guidelines for stowing and shipping solid bulk cargoes are too simplistic. The liquefaction potential depends not only on how much moisture is in a bulk charge, but also on other material properties, such as the particle size distribution, the ratio of the volume of solid particles to water and the specific gravity of the charge, as well as the method of loading and the movements of the ship during the voyage.

The production and transportation of new materials, such as bauxite, and the increased processing of traditional ores before they are shipped means more cargo is being transported whose material behavior is not well understood. This increases the risk of liquefaction of the cargo.

Commercial agendas also play a role. Pressure to load ships quickly, for example, leads to more hard loading, even if the water pressure in the cargo threatens to rise. And pressure to deliver the same tonnage of cargo as loaded can discourage the ship’s crew from deflating cargoes during the voyage.

What is the solution?

To address these issues, the shipping industry needs to better understand the material behavior of solid bulk cargoes currently being transported and prescribe appropriate testing. New technology could help with that. Sensors in the hold of a ship could monitor the water pressure of the bulk cargo. Or the surface of the payload can be monitored, for example with lasers, to identify any changes in position.

The challenge is to develop a technology that is cheap enough, quick to install and robust enough to survive the loading and unloading of the cargo. If these challenges can be overcome, combining water pressure and cargo movement data with weather and vessel movement information can provide a real-time warning of whether the cargo is about to liquefy.

The crew could then act to prevent the water pressure in the cargo from rising too high, for example by draining water from the holds (to reduce water pressure) or by altering the ship’s course to cope with particularly bad weather (to reduce the ship’s movements). Or if those options aren’t possible, the crew can evacuate the ship. In this way, this phenomenon of solid bulk cargo liquefaction could be overcome and fewer ships and crew members would be lost at sea.

Susan Gourvenec is Professor of Offshore Geotechnics at the University of Southampton. This article was originally published on The Conversation and has been slightly edited to conform to Ars Technica style guidelines. Read the original article.