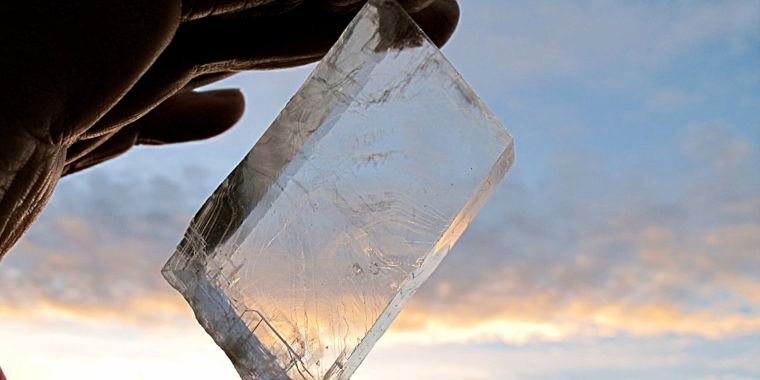 When the Vikings first sailed to Greenland in late 10e century they had no compasses to guide them; that technology would not reach Europe until the end of 16e century. So how did they do it? A new computer simulation says an unusual method mentioned in an eight- or nine-hundred-year-old Icelandic saga would have been accurate enough to get Viking ships safely to Greenland.

“The Viking legends (so-called sagas) refer to mysterious tools, sunstones, that allowed them to determine the position of the invisible sun in cloudy or foggy weather,” archaeologist Gabor Horvath told Ars Technica.

In The saga of King Olaf, the titular king – who ruled Norway from 955-1030, around the time the Vikings settled Greenland – visits a chieftain in a remote part of the country to investigate some cattle thefts. There he spends the night in a strange spinning house and has a strange dream, which the centurion’s sons interpret as a vision of the kings who would succeed Olaf as rulers of Norway. Part of the text describes a stone that allows the king to see through dense clouds and snow to determine the position of the sun:

“The weather was thick and snowy as Sigurður had predicted. Then the king called Sigurður and Dagur (the sons of Rauðúlfur) to him. The king made people look outside and they could not see a clear sky anywhere. Then he asked Sigurður to tell him where the sun was at that time. He made a clear statement. Then the king sent for them to fetch the sun-stone and held it up, and saw where the light of the stone radiated, and thus at once confirmed the prediction of Sigurður.”

That sounds a bit like a magic trick, but objects called sunstones or sunstones also appear in church inventories from Iceland. An archaeologist named Thorvild Ramskou suggested that the seemingly mystical stones were actually everyday navigational tools for determining the sun’s position, though he wasn’t exactly sure how they worked at the time. Archaeologists and historians now think that the Viking sunstones may have been a mineral called calcite, or Icelandic fir, with a crystal structure that polarizes light.

Normally you see double when you look through a calcite crystal. But if you align the crystal at right angles to the light, the double image dissolves into a single point. A series of 2011 experiments showed that looking through a calcite crystal can determine the direction of the sun, and thus which direction is west, down to a few degrees even under twilight conditions. And a new study says Vikings could have reliably made their way across 1,600 miles of ocean from Norway to Greenland using only sunstones to navigate.

Horvath used a computer program to simulate 1,000 trips from the port city of Bergen, Norway to the settlement of Hvarf on the southern coast of Greenland. Each journey started on the spring equinox or summer solstice, with a randomly chosen amount of cloud cover. To make the three-week journey of 1600 miles, the simulated Vikings would have to sail west at a latitude of about 60⁰21’N.

At sunrise on the first day of the trip, the program simulated the first sighting using a calcite, cordierite or tourmaline sunstone. Thanks to the 2011 experiments, the program knew the margin of error of each crystal, which depends on the cloud cover and the angle of the sun in the sky. So it picked a random course that was within the error range and set course at 11 MPH. The simulated ship would follow that course until the next sighting, at which point the program would generate a new one.

That process repeated itself until the virtual ship traveled far enough to reach Greenland. If the trip ended with the ship close enough to see the mountains of the Greenland coast, it counted as a success. And overall it worked quite well. As long as the simulated navigator made a sighting at least once every three hours, the Vikings arrived safely more than 92 percent of the time.

“Nobody knows if the Vikings really used this method,” Horvath and his colleagues wrote. “But if they did, they could navigate exactly with it.”

But if the navigator made a sighting every four hours, the ship only reached Greenland 32.1 to 58.7 percent of the time. With sightings every six hours, the success rate dropped below 10 percent. Obviously, Viking navigators couldn’t afford to slack off. If they sail too far north, a ship could end up on a troubled part of the northern coast of Greenland, where they risk running out of food or water before reaching port. The alternative could be even worse.

“In cases where the shipping lanes leaned significantly south, Viking voyages never reached Greenland, but ended with the death of the entire crew in the Atlantic or reached North America,” Horvath and his colleagues wrote. That kind of navigational error could bring the Viking settlers to the coast of Newfoundland around AD 1000.

Of course, like all simulations, this one tests a very simple version of reality. Ships sailing across the North Atlantic face storms, high winds and ocean currents, and a ship with sails rolled up for the night can still drift off course by morning.

“All of these will be studied by us in the future,” Horvath told Ars. He wants to find the environmental conditions that cause successful sunstone navigation to break down. “If it could be consistently shown that failure of successful navigation only occurs under simulated conditions [which are] far from, or rare in, reality, this would demonstrate well the robustness of our findings presented here,” he said.

Nothing new under the sun

Archaeologists and historians now have good reason to think that calcite or other minerals could be the sunstones of medieval texts; what they still don’t have is archaeological evidence that Vikings actually did use these minerals as navigation tools. So far, no calcite, cordierite, or tourmaline crystal has turned up at any Viking archaeological site. But archaeologists found a piece of calcite on the wreckage of a British warship, Alderney, that crashed off the Channel Islands in 1592 — and the crystal was near some navigational instruments.

If the sunstones described in Icelandic sagas and church inventories are really navigational aids made of crystal, perhaps it’s not surprising that they work so well. When Ramskou suggested the idea in 1967, he wasn’t quite sure how sunstones enabled the Vikings to find the sun at dusk or in the midst of clouds.

But a ten-year-old in Copenhagen read the magazine Ramskou published his article in, and the excited young archeology enthusiast told his father about the Viking sunstones. The boy’s father happened to be a Scandinavian Airlines (SAS) navigator in Copenhagen, and he thought the idea of ​​looking through a filter on a cloudy day to pinpoint the sun’s course sounded familiar. At the time, kites used sheets of polarizing plastic mounted on something resembling a sextant to do the exact same thing when flying at high latitudes where a magnetic compass wouldn’t work reliably.

The SAS navigator apparently contacted Ramskou, who immediately identified a pair of polarizing crystals, including cordierite, which changes from yellow to dark blue when at right angles to the sun’s rays. He tested it on an SAS flight from Greenland to Denmark, with encouraging results. So if Horvath and his colleagues are right, 20e century pilots may have used the same method as the medieval Vikings.