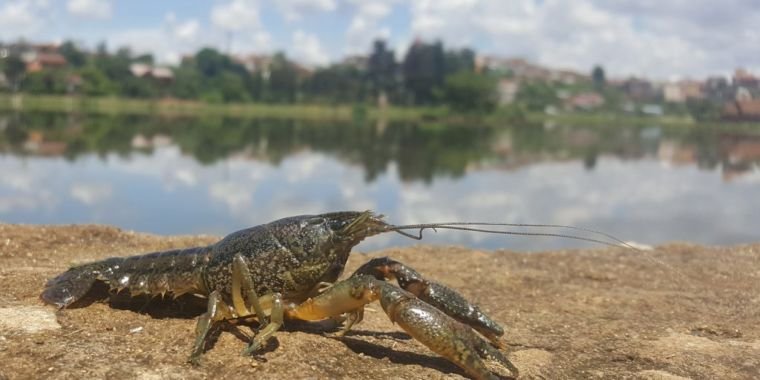 It is possible to infer the origin of many species from things like fossils and DNA sequences. But for one creature, we have a specific date: 1995. Then the first marbled crayfish appeared in a pet store in Germany, mixed with similar animals that originally came from streams in the southern US.

When it came to selling pets, the marbled crayfish had one big advantage over its relatives: it doesn’t need males to reproduce. Instead, females can make genetic copies of themselves, turning any aquarium into a factory for an army of crayfish clones. Now researchers have confirmed that these clones have spread across Europe, made it to Japan and started invading the streams of Madagascar.

Ostensibly, the publication describing these results is about genome completion for the marbled crayfish. And thanks to the genome, researchers have been able to confirm that crayfish from around the world are essentially clones. But the real story in Natural Ecology and Evolution is the evolution and global distribution of an entirely new species in less than 25 years.

We know it’s less than 25 years old because the species originated in a German pet store. The store had sold some kind (procambarus fallax) which originated in the Georgia and Florida streams, when a different-looking crayfish appeared in their midst. Called “marmorkrebs,” or the marbled crayfish, it had one feature that made it especially attractive to the pet trade: It was parthenogenic, meaning it was an all-female species that produces viable eggs. Put one in a tank and it would eventually fill up with offspring that could all be sold as pets.

However, as we have seen in far too many cases, pets are often reintroduced into the wild. And for marmorkrebs, the same feature that made up for it for pet stores meant that a single escaped or abandoned crayfish could eventually populate an entire stream. marmorkrebs has now been found from Sweden to Italy and from the Netherlands to Ukraine. It’s established in Japan and Madagascar, and it’s been introduced back to the US as a pet, meaning it’s only a matter of time before it makes its way back into the wild here too.

In the case of marmorkrebs, the origin and parthenogenesis appear to be related. The species appears to have three sets of chromosomes instead of the usual two. This could happen if a female produced an egg with two sets of chromosomes and then had it fertilized by a male who added a third to it.

The new genome sequence confirms that this was the case, as marmorkrebs carries two sets of nearly identical chromosomes, along with a third that is more closely related. (Since crayfish apparently have many chromosomes in the beginning, this means that these animals carry about 276 individual chromosomes). Having an extra copy of each gene is also likely to be helpful, as a lack of sexual reproduction makes it impossible for reproduction to remove damaged genes from the marmorkrebs genomes.

And marmorkrebs has been remarkably successful, as ecological studies suggest its range has expanded from 1,000 square kilometers to 100,000 in just one country (Madagascar) in just a decade. Although marmorkrebs are still closely related to its American cousins, it has picked up enough genetic changes to differentiate from them at the DNA level. Meanwhile, populations from around the world are nearly identical — the authors tested lab strains from the US and Germany, pet stores and wild samples from Germany, and a number of animals obtained from different areas in Madagascar. In other words, the world is now filled with imperfect clones from a pet store accident.

Normally, success in a wide range of ecosystems depends on a fair amount of underlying genetic diversity, which allows for traits that help organisms adapt to local idiosyncrasies. But in this case, marmorkrebs seem to manage it with minimal adaptation, despite invading environments as diverse as Madagascar and Sweden. There are interesting genes in the sequence obtained by the authors; Marmorkrebsf, for example, has enzymes that can break down cellulose, the rough polymer that forms plant walls and gives wood its strength (most other animals rely on bacteria to digest this). But these genes seem to be shared by other crayfish.

This rapid spread can be a problem for ecologists trying to conserve native species, but it’s fascinating for biology. For starters, populations around the world will gradually adapt to their new environment, and the new genome provides a baseline that we can use to identify the genetic changes that make this possible. Moreover, we are only aware of a handful of non-microbial species that have long been able to refrain from sexual reproduction. We know what genetic changes have enabled those species to survive without sex, so we can see if some of the same things evolve in these crayfish.