mr. Robot: Red Wheelbarrow is as crazy as it takes |Techilink 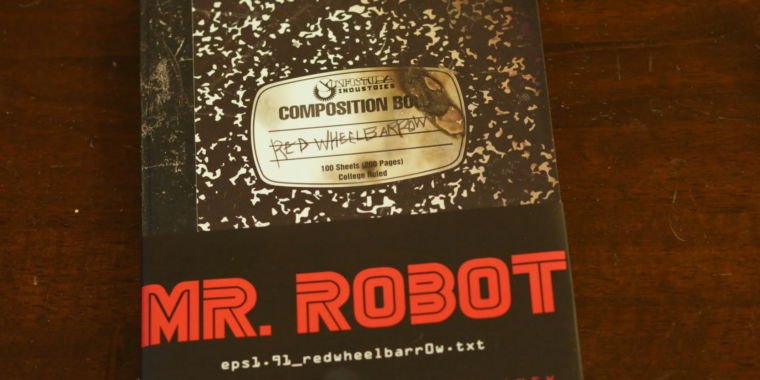 NEW YORK—The very, very long line to get in Mr Robot book panel at the 2016 New York Comic Con’s BookCon shows just how much this TV show has captured the fascination of a huge audience. The attention to the smallest detail, Easter eggs, psychology and crazy conspiracies led to some of the most popular watercooler/Reddit conversations of 2016. The show also inspired our very own Nathan Mattise to analyze every episode on Ars’ TV. podcast decoded.

Show creator Sam Esmail (who has been listening to the Ars podcast) and writer Courtney Looney showed off a trailer for the new book that answers questions about the show’s current seasons (no, they wouldn’t give up on season 3).

During the panel, they expressed how much they love the discussions Mr Robot on Reddit, as people solve the puzzles and pinpoint the complex details of the show (Esmail said he was surprised one detail in particular was NOT thought of, but didn’t want to show what it is). Esmail and Looney cited New York as an important character in the show. For example, Romero’s story about F-Society’s Coney Island arcade is a true legend, and the crew actually shoots in the real arcade (no soundstage). And yes, during the pilot episode, the crazy guy who walked right up to the camera on the subway was actually a random stranger, and they kept him inside. When asked what company E-Corp was modeled after, Esmail was shocked that hardly anyone guessed it’s Enron.

After the short trailer, Esmail and Looney discussed their upcoming tie-in book, Mister Robot: Red Wheelbarrow (aka “eps1.91_redwheelbarr0w.txt”). Red Wheelbarrow is a recurring theme throughout Mr Robot Season two, inspired by the William Carlos Williams poem that Tyrell recites in the finale of S2. The writers nicknamed their new book “the prison episode” because it covers events between season one and season two. Red wheelbarrow is essentially Elliot’s marble notebook from when he was in prison, and he’s transparent this time (no more lies). Elliot asked Hot Carla to burn the notebook, but… she didn’t.

Red wheelbarrow looks like the notebook you would have bought for school as a kid, but definitely not for kids. It appears partially burnt, handwritten (taken from the actual handwriting of Rami Malek and Christian Slater), and contains text in the margins, interjections by Mr. drawings by Mr. Robot. Items are even inserted into the pages à la Danielewski’s House of Leaves. Items include a church group brochure, blank envelope, and greeting card.

While things falling out while reading are annoying, Red wheelbarrow is a fun look into Elliot’s mind and is great at filling in the gap we missed when Elliot lied to his “friends,” the audience. When asked what it was like to delve so deeply into Elliot’s mind, Esmail replied, “I mean, it sucks.” Elliot’s delusions and desperate attempts at control are enjoyable, but also unsettling.

The only hint about season three would drop Esmail: more Leon. Mister Robot: The Red Wheelbarrow appears on November 1, 2016.

For more information about Mr. Robot when Decrtyped, Ars Technica’s Mr Robot podcast, returns next summer with season 3. Check out all of our S2 episodes below, and if you enjoyed the podcast please consider giving us a rating on iTunes (helps findability) or reach out with feedback in the comments or email mail (helps us to improve it going forward).