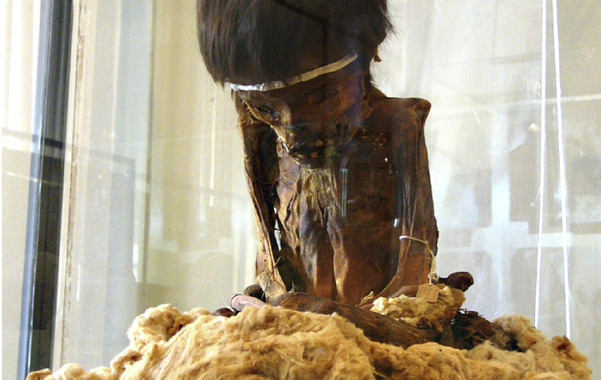 Most Peruvian mummies come bundled up in dust, with their legs folded to their chests and their arms around their knees. But the young boy we now only know as the Nasca Boy was buried in a position he probably took in his life: on a contoured, padded adobe stool, with his lower legs tucked under his chair. It is the only burial of its kind that archaeologists have ever seen, and it immediately suggests two very important things about this child: he lived with a disability that required extra care and resources, and he was well cared for and valued by the people. around him, even at a time in their history when food was scarce and life uncertain.

That’s the conclusion of a new study, which revisits the original 1973 research on the mummified remains of the young boy, who died around AD 700. The original archaeologists, led by the late Marvin Allison, focused on identifying evidence of tuberculosis in the boy’s remains; they provided the first evidence that the disease had stalked the South American population long before the Europeans arrived.

Archaeologist Lorna Tilley and her colleagues revisited that study in an effort to reconstruct details of the child’s experience with his illness and disability, the type of care he likely received, and what that reveals about the culture he lived in. “I trust to use and synthesize the information available from the work of other archaeologists, in the hope that I have understood their research findings and can provide abundant references so that readers can go to the sources themselves,” Tilley told Ars Technica.

An autopsy in the early 1970s found evidence of a tuberculosis infection in the Nasca Boy’s spine, a condition called Pott’s disease. Allison and his colleagues suggested that the child’s ordeal started as a mild respiratory infection when the boy was a year or two old. Tuberculosis bacteria in his bloodstream must have spread to his spine, where it eventually left a 5cm wide abscess in his lower back, eating away several vertebrae and the intervertebral discs.

Allison and colleagues also found lesions (called tubercles) and Mycobacterium tuberculosis bacteria in the boy’s lungs, heart, liver and right kidney. This widespread infection, called miliary tuberculosis, may have spread through the abscess in his spine through his bloodstream, likely killing him within weeks.

Taking care of the Nasca boy

The Nasca boy probably lived with Pott’s disease for a few years before losing mobility in his legs, and it would have taken a toll on his early childhood, forcing him to live with back and chest pain, fever, weight loss and fatigue. It is likely that he would never have been able to keep up with his peers, neither in the play nor in the work often expected of children in farming communities. Tilley and her colleagues compared the Nasca Boy’s case to studies of modern children with chronic illnesses, and they speculate that he may also have dealt with depression, anxiety and grief.

A child with such an illness would need extra care and support from their relatives – sick children should be comforted if they are in pain, cooled if they have a fever and probably persuaded to eat.

Once Pott’s disease immobilized him, the Nasca boy would have required an even higher level of care: help with bathing and personal hygiene, frequent massages and repositioning to aid circulation, and much closer supervision to ensure it. that he is safe, hydrated and getting adequate nutrition. “Without massage, repositioning, constant monitoring and maintenance of hygiene, pressure ulcers are unavoidable when a person is immobilized and, if left untreated, quickly become infected,” Tilley told Ars Technica. “Likewise, when someone is effectively immobilized, their circulatory and respiratory (as well as other!) systems are affected very quickly.”

The fact that the Nasca boy survived eight to ten years with such a serious illness is proof that he received the care he needed, and it appears that he was well looked after; his skin, preserved by natural mummification for nearly 1,300 years, shows no signs of bedsores, meaning he likely benefited from good hygiene and frequent position changes. And the stool itself tells a story.

“The crutch speaks of an understanding and acceptance of the Nasca Boy’s needs and a willingness to work around them,” Tilley and her colleagues wrote.

Medicine in the pre-Columbian Andes?

There’s no evidence of what kind of drugs he might have taken for pain, fever, or digestive problems, because the 1973 study focused on looking for evidence of illness, not treatment.

“Allison et al. approached the remnants of their subject with one goal in mind, viewing information outside of it as irrelevant,” Tilley and her colleagues wrote. But Tilley says the Nasca almost certainly had access to drugs, locally or commercially, and biochemical analysis of his hair could provide some clues as to whether his body was metabolizing certain chemical compounds, including alcohol, in his final months. Hair also contains cortisol, which can provide insight into a person’s stress levels, and stable isotopes of strontium and oxygen that can suggest what he was eating. Those answers won’t appear anytime soon, though.

“While this would satisfy curiosity, I don’t think it would be considered a priority,” Tilley told Ars Technica.

Analysis of his gut contents could also provide clues to medicinal plants or his last meals, but that opportunity may have been lost; it’s not clear whether Allison and his colleagues removed and discarded the mummy’s entire stomach and intestines in the 1970s.

It took a village

There’s no evidence of who would have taken care of the Nasca Boy during his short, challenging life, but Tilley and her colleagues suggest it was likely a concerted effort by his mother and a mix of older siblings, older relatives, and possibly others. . In a society where survival depended on crops and livestock, it would have been a precious prospect for a family to get away from the work of growing food every time. That would have been especially true of the Late Nasca, living under the pressure of drought and a fickle climate, which had plagued the region since about 640 CE.

The fact that the care took place despite these hardships may indicate something important about the Nasca. “The survival of the Nasca Boy suggests that this particular child was loved and valued enough by those who cared for him to make this commitment,” Tilley and her colleagues wrote. “There is no reason to assume that not all children were equally valuable.

That’s well-founded speculation at best, but it’s potentially the clearest insight we have into the family life of a culture that has left almost nothing of the sort behind. All the art that the Nasca has left us has to do with religious or ritual matters – women rarely show up and children and everyday life are completely absent.

“At this distance in time — more than 1,200 years ago and with no documentary evidence to fall back on — we can never be sure we’re in the nitty-gritty of the analysis,” Tilley told Ars Technica. “But at the broad level, and focusing on the practical and emotional aspects of caring for a very ill child over an extended period of time when their decline is evident, we can surmise a society in which children were valued in their own right; recognized as individuals with individual needs; and supported by the use of potentially scarce resources in its maintenance.”