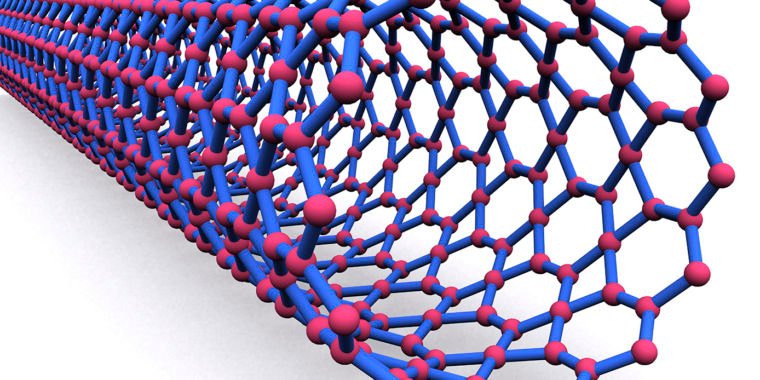 In 2012, I had the pleasure of visiting the IBM Watson research center. One of the people I spoke to was George Tulevski, who was working on developing carbon nanotubes as a possible replacement for silicon in some critical parts of transistors. IBM likes to think about developing technology with a time window of about 10 years, which puts us about halfway through when the company would expect to make nanotube-based hardware.

So what’s up? A small progress report was published this week Nature Nanotechnology (including Tulevski as one of the authors). In it, IBM researchers describe how they can now assemble test hardware that can propel a processor based on carbon nanotubes up to 2.8 GHz. It’s not a particularly useful processor, but the methods used to put it together show that some (but not all) of the technology needed to commercialize nanotube-based hardware is almost ready.

The story of assembling a carbon nanotube processor is largely one of overcoming hurdles. You wouldn’t necessarily expect that; since the nanotubes can be semiconducting by nature, they appear to be a natural fit for existing processor technology. But getting the right nanotubes in the right place and playing nicely with the rest of the processor is a real challenge. In fact, it is a series of challenges.

Notice I said above that nanotubes can be semiconducting. Unfortunately, they can also be made of metal. (Well, unfortunately not quite, that’s quite useful for other applications.) Even worse, if we make a batch of nanotubes, we can’t control whether they’re going to be metallic or semiconducting. Instead, you just get a random mix of the two.

There have been two approaches to dealing with this. The first is to just put more carbon nanotubes in place than you need, then identify the metals and destroy them. Needless to say, this isn’t particularly efficient. The alternative is to take a batch of carbon nanotubes and then separate the semiconducting ones. There are several ways to do this, but most of them are not 100 percent efficient. Which, of course, means that at some level you’re going to put a piece of metal where you wanted a semiconductor, shorting out part of your processor.

For the new work, IBM relied on a development pioneered at the National Renewable Energy Lab (a facility targeted by the current government for massive austerity). Some smart people at NREL realized that semiconducting carbon nanotubes would preferentially interact with complicated organic solvents that have nitrogen-containing rings in their structure.

Researchers at IBM decided that this would indeed be very useful, so they tested the technique. A single extraction using the same technique and 10,000 individual nanotubes later, they can report that more than 99.9 percent of the purified tubes were semiconducting. We can consider NREL’s work replicated. And if 99.9 percent isn’t good enough, there’s no reason why the process couldn’t be repeated to further increase purity.

A sense of place

Of course, those semiconducting nanotubes don’t do a processor much good when they’re still in solution. Ideally, you want a method of placing them in specific locations on your chip. IBM rolled out its own solution here. The company developed a system where polymers would only form on specific material on the chips. These polymers would help direct carbon nanotubes out of solution and to specific locations.

So we now have a basic kit for carbon nanotube processors. But it’s still not enough to do something useful. Modern processors have a complicated mix of p- and n-type semiconductors (which tend to build up positive or negative charges). Carbon nanotubes are naturally p-type, but they can be converted to n-type if placed near certain metals. Unfortunately, those metals tend to oxidize under normal conditions.

So the folks at IBM put a hood over this metal layer to try to protect it. Unfortunately, the metal they used (scandium) turned out to love oxygen so much that it removed it from another part of the hardware, a hafnium oxide layer. So that layer had to be replaced.

With all the hurdles cleared, the team decided to make some individual transistors. These worked extremely well, with every one of the 192 transistors the researchers tested operational. So the team moved on to building actual circuits. Not a useful circuit, but a typical test case for new processor technology: a ring oscillator. This is a set of gates set up to flip bits; if the ports get a 1, they convert it to 0 and vice versa. By placing an odd number in a ring-shaped configuration, each individual gate will oscillate between 1 and 0 with a timing that depends on the amount of delay involved with each individual gate changing state.

But to return to the point that started this discussion, IBM – and the rest of the materials science community – still have some room left in their timeline to get this commercialized. And five years ago they were still working on pure semiconducting nanotubes. Given the progress since then, I wouldn’t rule things out.