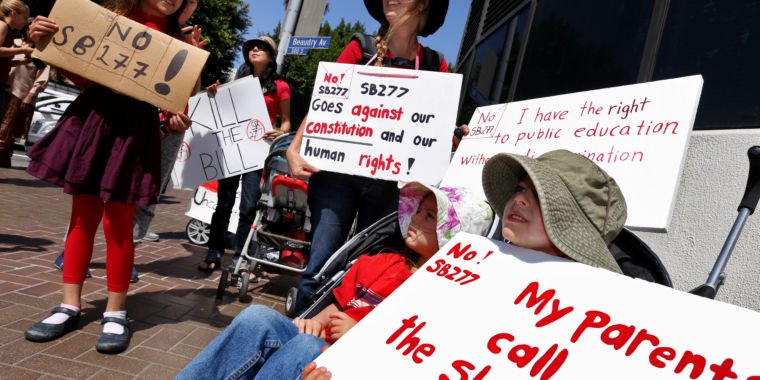 For years, doctors and health experts have tried unsuccessfully to flood the modern anti-vaccination movement with data and science. They’ve showered hesitant parents with data on the safety and efficacy of the life-saving injections, plus information on herd immunity and the dangers of otherwise bygone illnesses, such as measles. Yet the attempts largely fail. In some cases they even backfire; mind-boggling studies have shown that repeating myths and misinformation while debunking them can actually reinforce them.

For a new tactic, public health researchers have turned away from facts and reason and toward morals and values. They hypothesized that if they can deliver vaccines in a way that makes anti-vaccine parents feel right, they can finally put out the insidious and deadly movement. And indeed, in a preliminary study, they found evidence that vaccine-averse parents have different moral foundations than those who embrace vaccines.

In the first study of 1,007 parents, the researchers found that the most hesitant parents placed twice as much value on ideals of “purity” and “freedom” as parents with little hesitation. Those are two of the six value categories in the Moral Foundation Theory, which social psychologists developed years ago to untangle people’s moral judgments and decisions based on emotional or intuitive processes, not data and science.

The study, led by Emory University epidemiologist Avnika B. Amin, drew on that theory to break apart beliefs about vaccines. In it, the basis of purity relates to disapproval of things or actions perceived as ‘unnatural’ or ‘disgusting’. The freedom foundation is associated with placing a high value on personal freedoms and resenting the dominance of others. The other four foundations are:

Their findings, published this week in Nature human behavior, hint that some vaccine-averse parents may view vaccines as “unnatural” or “contaminated” or view the injections as forced upon them by dominant health and medical authorities. This seems to mirror the sentiments on prominent anti-vaccination websites, which dangerously suggest that exposing children to disease “naturally” is the best way to build their immunity and that vaccine policies violate parents’ civil liberties. violates.

To sidestep that nonsense, Amin and colleagues suggest that more effective health campaigns could reformulate vaccines with slogans like:Boost your child’s natural defenses against illnesses! Keep your child free from infections – Vaccinate! Or “Take personal control of your child’s health! Vaccinations can help your child and others live a happy and healthy life.”

But those are just hypotheses. The study did not test the efficacy or perceptions of such slogans or whether they could influence vaccine opponents. The study also had other limitations, namely that it was a correlation study. In other words, it does not prove that the participants’ differences in moral bases actually caused their vaccine attitudes. Finally, the attitudes of the 1,007 participants may not match those of the general population, so the results may not be generalizable.

The participants were a convenience sample recruited through MTurk. To be eligible for the study, participants had to be between the ages of 18 and 50, live in the US, and have at least one child under the age of 13. -item Moral Foundations Questionnaire. Of the 1,007 who did so completely, 73 percent were classified as “little hesitant” for vaccines, while 11 percent were called moderately hesitant and 16 percent very hesitant.

Although the hesitant groups were small, the researchers did a second follow-up study with 464 parents who supported the results. These participants were also recruited through MTurk and completed the same Moral Foundations Questionnaire. But they also completed a survey about their beliefs about vaccines. This included relaying their stance on statements such as “Vaccines contain poisons/toxins/contaminants” and “Vaccine mandates are excessive government control.” The researchers found that agreement with such statements was directly related to highly valued moral foundations of purity and freedom.

Researchers will have to do more work to replicate and fully understand these early findings. That said, the authors conclude that the findings “indicate a promising direction for the development of messaging interventions that are shaped by quantitative evidence and less dependent on common sense cues.”