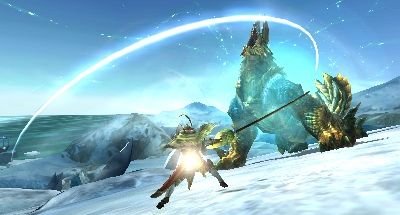 Grab your cargo knives, insect glaives and cheese fondue – there are monsters to be hunted. The aptly named Monster Hunter series has returned, this time without a number after the name. This time it’s just Monster Hunter Generationsand the name hints at more than the time it takes to learn these games (assuming you’re part of what seems like the majority of Western players rightfully intimidated by Capcom’s Japanese moneymaker).

As with every Monster Hunter since the first, what you’re learning is how to knock down huge and not-so-massive creatures of the wild. Think of each big monster as a boss fight – one that can take nearly an hour to complete as you track and slash prey across wide, repetitively visited zones.

To do this successfully, you’ll need to chop them up and convert the material into better equipment. Break it all up with some grinding, collecting and retrieving quests and you’ve got the thousand-plus hour loop the series is known for over several “generations” of hardware.

It’s a legacy of which this latest entry is particularly aware. “Generations” refers to the fact that this Monster Hunter draws from previous entries. It’s like a greatest hits album for the franchise, if you will. Well-known hunting grounds return from Monster Hunter Freedom 2exclusive to Japan Portable 3rd, and even the debut game in the franchise. Each locale has been ever so carefully adjusted to make elements available Monster Hunter 4 Ultimate. That means there are more ledges on the beasts’ backs for you to grab onto as you drive them to the ground.

Instead of new zones to conquer Generations, there is a wide variety of new combat styles: Guild Style, Striker Style, Adept Style and Aerial Style. These combat styles are equipped as weapons and determine how attacks from your actual weapon are strung together. So when you equip a great sword, you get the same slow heavy swings it always has. If you’re equipped with Aerial Style, that same sword gets more and better hits while jumping (an ability that is). nothing but granted if you have that style equipped), but leave your options pretty limited while you’re on the ground.

As someone who is just getting serious about the Monster Hunter franchise with that of last year 4 Ultimate, I liked seeing Guild Style basically mimic the feel of that game for all the weapons. Adept Style, meanwhile, offers extremely tricky dodge moves that can be used to counterattack, perfect for the crazies who spend hundreds of hours learning each attack animation and how to time each one.

While leaning towards Aerial Style myself, Striker is perhaps the most interesting of the viewpoints from a design perspective. It’s pretty much the “easy mode” for most of the weapons in the game.

The combos it creates are quite simple, but the shape also allows players to use the most “Hunter Arts” of any style in the game. These Arts are basically super moves, similar to the kind of finishers you’d see in Capcom’s other long-running, hyper-technical franchise, street fighter. Those arts are not there yet either another important addition to the road Generations plays – no small feat for a series that embraces change the way the Grand Canyon embraces erosion.

Cutting, slashing, shooting, punching and striking your way through combat (for those using the Hunter’s Horn) will fill up meters that will allow you to activate these Hunter Arts, granting you powerful abilities, from stronger beatdowns to unlimited sprinting in and out of battle. They are nothowever, so powerful that they will drop a Tetsucabra in one fell swoop.

Instead, the new feature functions more as a reward for pent-up aggression against bosses – a way to break up the monotony between your average series of heavily considered and deftly executed combos. If you are a diehard Monster Hunter Purists worried that Hunter Arts would make the game too arcadey might find something else to keep you awake at night.

Hunter Arts belongs to a veritable nest of quality of life improvements Generations brings to the Monster Hunter formula. Mounting monsters is now less annoying when playing with friends, as those monsters no longer fight the rider when attacked from the ground. And once you fully to clean a monster’s clock, you can just hold down the action button to cut the corpse’s important crafting materials instead of repeatedly pressing the A button. It’s a small change, but one my thumbs appreciated.

The cooperative experience that is so important to enjoy Monster Hunter remains largely unchanged. You can still team up with as many as three friends or strangers to take on titans while your otherwise trusty AI companions (called Palicoes) take a nap. On the single-player side, certain missions actually require you to take control of these feline compatriots manually, an addition that feels more like filler than a major new feature.

The draw of Monster Hunter to me is the slow, reliable grind of tightly executed combat to get rewards in the form of new gear. Palicos do get their own equipment, but not to the same extent as human hunters. So increasing their arms and armor doesn’t feel like the “real” progression of the game like turning giant frog skin into new boots.

A much more welcome addition is the new Fateful Four – a quartet of ferocious creatures connected to the well-worn ‘story’ of Generations. While most Monster Hunter games only have one giant monster to pull the single player missions each of Generations’ four equally important villages each have their own corresponding villain for you to conquer. Sure, this is already a game built entirely around killing giant dinosaurs, monkeys, bugs, and others, but the extra gravitas (and design work) put into these unique beasts is a nice draw.

The extra “bosses” will give newbies something to look forward to battling, while the early access to various areas will appeal to old fans who don’t need their hands through linear progression from area to area. in one way or another Generations manages to be the deepest and also the most accessible at the same time Monster Hunter yet. I’m no expert, but based on my dabbling with these games over the years, I’m even inclined to call it the best of the bunch so far.

My only major complaint about the game is that it’s stuck on the 3DS. I’d like to have some real analog sticks and an HDTV to really get the spotlight Monster Hunter‘s stellar combat and creature design. It’s definitely coming, on Nintendo’s NeXt platform or any other console. Meanwhile, Generations feels a bit like trying to spin the wheel one more time before jumping to new tech, all the while trying out a few experiments to refine in the next, numbered game.

It’s been a little over a year since the last game made its way to the 3DS in North America. That’s not much for a series where 50 hours played is a warm-up. Generations makes some smart, interesting changes in ways the series normally doesn’t: sacrificing new real estate for a mechanical overhaul. Yet it still looks, feels and plays largely like the last game on this generation of handheld hardware.

For newcomers, this is virtually a non-issue. You get the best jump point the series has had since… well, the last game. For diehard fans, it probably won’t matter. If you want to see the new stuff, make the jump and with you all your friends who join for the multiplayer. Those new monsters aren’t going to hunt themselves.

Generations is a last, beautiful breath of life for this aging Monster Hunter engine. If you’ve been standing on the fence, now is the perfect time to jump on board.