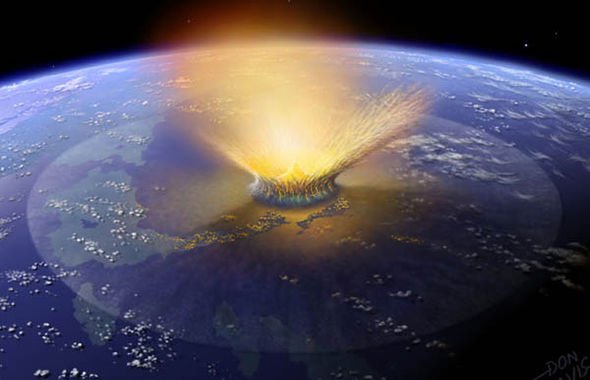 There aren’t many individual experiments that end up becoming a staple of textbooks, but Stanley Miller and Harold Urey did one of them. Miller and Urey are the people who sealed a mixture of gases intended to model Earth’s early atmosphere and shocked the gas with some sparks. What was created was a complex mix of chemicals, including amino acids, the building blocks of proteins.

It was a groundbreaking experiment because it provided researchers with one of the first ways to experimentally approach the origin of life, but its relevance to the true origin of life has faded as the research it inspired began to refine our ideas. A French-Czech team of researchers decided to take another look, using an energy source Miller and Urey hadn’t considered: the impact of a body coming from space. The result? The production of all four bases found in RNA, a close chemical cousin of DNA and equally essential to life.

There are two reasons why the Miller-Urey experiment gradually fell out of favor. The first is conceptual. At the time, people focused on life’s dizzying web of chemical reactions, almost all of which are catalyzed by proteins, so it was hard to imagine life without proteins. The formation of amino acids could enable the formation of proteins and thus seemed to provide an obvious route to a primitive biochemistry. Genetic material can be added later.

What Miller and Urey didn’t know, and what we wouldn’t discover for decades, is that proteins don’t have a monopoly on the catalytic chemistry of cells. We have discovered that a number of key reactions in the cell can be catalyzed by RNA; since then it has been shown that both RNA and DNA can participate in all sorts of interesting chemistry. Those discoveries helped usher in the RNA world hypothesis, which held that biochemistry and genetics began simultaneously in the form of catalytic RNA molecules.

Amino acids can be useful cofactors for RNA or byproducts of the reaction, but they were not central to early life. The challenge was not to show how amino acids could form under simple reaction conditions; instead, Miller-Urey’s focus shifted to ways to form the chemical bases that are the building blocks of RNA.

In addition to conceptual problems, the original experiment encountered practical problems. Miller and Urey assumed what is called a “reducing” atmosphere, as opposed to today’s oxidizing atmosphere. In practical terms, this means something similar to that of Saturn’s moon Titan, where the main components of our atmosphere are linked to hydrogen atoms – so ammonia instead of molecular nitrogen, water and methane instead of carbon dioxide, and not oxygen alone. Ideas have changed about that, and there is evidence that the early Earth’s atmosphere was probably neutral, somewhere between reducing and oxidizing.

The people behind the new research claim that current evidence suggests that the atmosphere was a bit on the reducing side of neutral more than 3.6 billion years ago. In any case, it is clear that early Earth was regularly hit by things like comets, which carried a large cargo of reduced chemicals. So while a Miller-Urey-esque vibe may not have dominated, they argue it would have been relevant.

They did the Miller-Urey experiments again, but this time they looked for the presence of a different chemical: formamide, which has one atom each of carbon, nitrogen and oxygen, with three hydrogen atoms thrown in. Although simple, it is an important chemical building block. Experiments by other researchers have shown that formamide can react with itself under the right conditions to form all four RNA bases.

Miller and Urey wouldn’t have known how important a finding was, but it certainly showed up in the new work. It did not form any of the RNA bases, but that was to be expected since these reactions require specific catalysts or radiation at UV wavelengths. However, the authors noted that researchers had described another option for catalyzing the formamide reactions: shock waves, such as those from alien impacts.

Conveniently, the team had access to the Prague Asterix laser system, which can generate Terawatt pulses. They used the system to mimic the kind of shock waves an impact would create.

Formamide was also formed in the shock wave reactions. But it went on to form all four bases found in RNA. Most were only present in small amounts, some just above detection limits. Of course, the shock waves from a real impact would be larger and more lasting, so the amounts would have to be scaled up significantly.

The new work doesn’t address the debate over how likely this kind of atmosphere would be on the early Earth. But the main takeaway is that the research adds to the multiple plausible pathways we have for producing the building blocks of RNA. It is also relevant to the prospects of finding a life elsewhere. Even if early Earth didn’t really have a Miller-Urey-like atmosphere, with billions of exoplanets to choose from, chances are a few of them did.