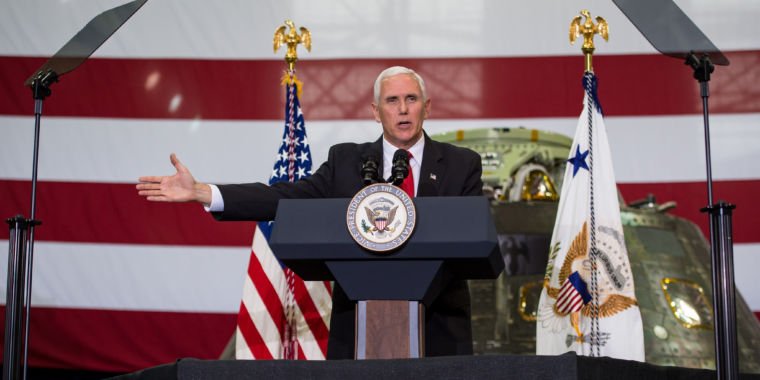 While continuing to visit key space facilities around the country, Vice President Mike Pence spent a few hours at the Kennedy Space Center in Florida on Thursday. During the visit, Pence spoke to NASA staff in the iconic Vertical Assembly Building and, for the most part, gave his stubborn speech in which he and President Trump pledged to restore US leadership in space.

In the comments, which mentioned “leadership” 18 times, there were a few nuggets of news. The recently announced National Space Council will meet for its first meeting before the end of the summer, Pence said. And he also gave some more details about his overall goal for NASA’s exploration program. “Our country will return to the moon and we will put American boots on Mars,” he said. It was not clear whether Pence plans to return humans to the lunar surface. Most likely, there shouldn’t be too much reading into this statement, as it seems less of a concrete policy proposal and more of a platitude at this point.

What seemed more important were Pence’s repeated references to “commercial space,” which according to two Republican sources to Ars, essentially referred to the kind of contract NASA used to fund its commercial cargo and crew programs. Pence seems intent on pushing NASA toward the fixed-price contracting model, where the government buys a service — such as a launch — from the commercial sector. This differs from the past where NASA could develop a technology and then pay the industry to develop it, or otherwise enter into an agreement where NASA paid the development costs plus a fee.

Perhaps the most significant reference came when Pence made the following comments: “Together with our commercial partners, we will continue to make space travel safer, cheaper and more accessible than ever before. The truth is that corporate America is cutting edge of space technology.”

This appears to be a nod to efforts by the commercial space industry, led by SpaceX and Blue Origin, to develop reusable launch vehicles that have the potential to significantly reduce the cost of access to space and provide launch-on-demand services. offer. “I think he gave a pretty clear shout-out to the low-cost advocates,” said James Muncy, the founder of PoliSpace, and a proponent of commercial space travel.

During his speech, Pence made no mention of the Space Launch System rocket that NASA plans to stack in the Vertical Assembly Building for the inaugural launch late next year or in 2019. This huge rocket, which can cost around $3 billion per launch when development costs are taken into account, appears to be the opposite of “cheaper” and “making space more accessible.”

Rather, it seems possible that Pence is referring to an Air Force report detailing how “ultra-low-cost access to space” could be enabled by reusable launch vehicle technology. The study recommends that the Air Force create a new organization, the “NewSpace Development Office,” to develop innovative acquisition strategies. The overall goal would be to move away from the existing model of launches, which are rare and expensive, to one where they are common and cheap.

What seems most likely is that Thursday’s scrutinized speech was not so much a formal policy statement — which will come months later after the space council deliberates — but more a reflection of the feelings of Pence and his staff as they prepare to launch the advice to implement. To that end, the speech appears to foreshadow Pence’s desire to coordinate the efforts of the US military, civilian and commercial space sectors while ensuring that the country pursues new technologies.

“The statement that the commercial space industry is leading is a breath of fresh air,” said Muncy. “Of course, the vice president was at NASA, so he praised NASA for the innovations in the commercial sector that came from partnerships with the space agency.”