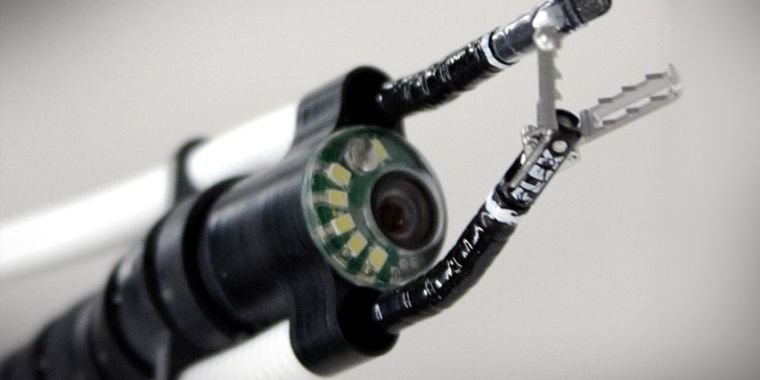 What is the first indication of skin cancer? A strange looking mole on the skin. What about cervical cancer? We look for cells that look abnormal. The eyeball, whether aided by microscopes or not, plays a vital role in medicine because it relays information to a brain that is very good at picking up subtle differences.

That’s why endoscopes are so useful: they show doctors what would otherwise be hidden. Even then, most endoscopes only show the surface features of organs, while proper diagnosis requires looking at cells hidden beneath the surface. This is exactly the problem that a large group of scientists, doctors and engineers have tackled. The researchers have developed an endoscope that reveals much better hidden features.

In some ways we should be surprised that we can not look beneath the surface of our skin. If you’ve ever looked at cells under a microscope, it’s very difficult to distinguish anything. You will see a few thin, barely visible membranes and a few mostly transparent clumps. A cell consists for the most part of water and most of the light just passes through it.

Unfortunately, those barely visible areas are enough to change the direction of any light passing through them, blurring the next layer. If there were only two layers, you could overcome the blur. But there are thousands of layers, each with its own distortion, giving you a white haze.

At the level of physics, the direction of each photon changes every time it passes through a membrane or bounces off a vesicle. As a result, a reflected photon travels in and out of the tissue along a random path. The randomness of the path is a blessing and a curse: The photon carries some of the path information with it, but interpreting the information is very difficult, and this prevents an image from being reconstructed.

You can see this effect for yourself by holding your hand in front of a bright light. Your fingers will glow from the light passing through the tissue, but the image of the filament is lost due to the random path the light takes through your hand.

But imagine if you could put a label on each photon – we won’t get into how to do this, because you can’t, although there is a way to label groups of photons. Photons Anna, Bill and Celine are sent into the tissue and we determine how long they are gone. Bill might return first, followed by Anna, while Celine drags in last after spending her time on a photonic pub crawl.

Now, given the travel time and an idea of ​​the average properties of the material through which the light traveled (water, in our case), we can calculate the distance Bill, Anna and Celine traveled.

An image can be reconstructed by doing that for billions of extra photons. You carefully keep the lighting conditions the same and measure photons coming from different tissue locations.

After these measurements are combined, an image can be created in several ways. Essentially, image reconstruction requires that all photons are scattered through the same volume, and therefore all photon trajectories can be explained by the properties of that volume. A kind of reverse search of possible volumes reveals the most likely 3D structure of the volume.

Optical coherence tomography is old and is even used in endoscopes. But the images are often quite blurry. The problem is really how to squeeze everything into a tube small enough to send a human in while keeping the quality of the optics high.

The problem is that all lenses have imperfections, called aberrations, even if the manufacture is absolutely perfect. Typically, the smaller the lens, the greater the effect of the aberration. In terms of optical coherence tomography, this means that we blur the point where we sample photons. As a result, the quality of the image deteriorates.

To solve this problem, the researchers turned to metamaterials. A metamaterial is an ordinary material structured on the scale of the wavelength of light. In addition, the structure changes the optical properties of the material. That basically means we can make fake materials that do very strange things.

The researchers created a 2D metamaterial that is basically rings of pillars. The diameter and spacing of the pillars locally alter the optical properties of the surface. In fact, the light from each ring mixes with the light from all the other rings. The mixing can lead to constructive interference (a bright spot) or destructive interference (a dark spot). The rings are structured in such a way that at a distance of about 0.5mm there is a very small spot, just like you would get from a lens. However, this metamaterial lens is flat (like a Fresnel lens) and is designed to minimize many of the aberrations.

The metamaterial lens-equipped endoscope outperformed two other endoscopes that used more traditional optical components (a normal lens and a fiber that bundles light).

After characterizing the performance, the researchers imaged a number of tissue samples, including human lung tissue (ex vivo, in this research). They showed that they could get relatively clear images of the epidermis, alveoli, cartilage and blood vessels; they also picked up an abnormality highlighted in the histological images. The main point is that some of these features were not even visible on images taken with traditional endoscopes.

Some of you may be waiting for a bigger revelation – it’s science and there must be a big discovery. But there is none. I know we like to talk about big breakthroughs and fundamental insights. However, science and medicine are not only advancing by leaps and bounds. Many small steps are more common. And if you look closely, many of the big jumps are a lead-up of many small steps.

This endoscope can be one of those small steps. The improvement in imaging won’t revolutionize anything, but it will save lives if it ends up in clinics. And it should enable researchers to detect tissue abnormalities earlier and better understand their development. That all makes the difference.