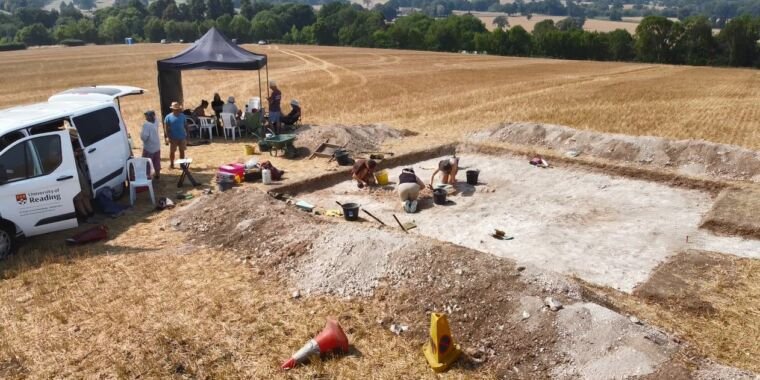 The Berkshire hilltop, where metal detector hobbyists found a warrior’s grave, would have been an insignificant frontier between neighboring tribes 1,400 years ago. But the warrior, buried overlooking the Thames River valley and all the trappings of power and status, tells a different story. Its presence suggests that this tranquil patch of English countryside was in the midst of the power struggles that swept across Britain in the decades following the Roman Empire’s retreat.

Around 400 CE, Rome left its far-flung colony in Britain and withdrew its troops to mainland Europe. Not long after, Germanic warriors from the continent invaded the island: the precursors of the Anglo-Saxons. Archaeologists are not entirely in agreement whether the Anglo-Saxons arrived as a huge wave of settlers who overwhelmed and replaced the native British, or whether only a smaller number of warriors came to Britain to seize power after Rome’s departure. Either way, they reshaped British culture and society over the following centuries.

The Anglo-Saxon tribes united under strong military leaders. In time, some of those groups would coalesce into the medieval Anglo-Saxon kingdoms of Wessex, Mercia and Kent. Others disappeared from power, were wiped out or absorbed by their rivals. And that brings us to the stretch of the River Thames between Oxford and London and the man archaeologists nicknamed Marlow Warlord.

In life, the man would have been a towering figure, especially in early medieval Europe, where the people were smaller on average than the modern population. Based on his skeleton, he would have been about 6 feet (1.8 meters) tall. Through forensics and isotope analysis, archaeologist Gabor Thomas and his colleagues at the University of Reading expect the bones to tell them more about the man’s age at death, how he died, what he ate and where he lived.

But the man was clearly a warrior, and he wielded power and status, along with his fine sword and iron-tipped spears. The sword was encased in a wood and leather scabbard, decorated with detailed bronze fittings. Elsewhere in the tomb, archaeologists have unearthed bronze and glass bowls, two iron spearheads, and the metal fittings one would expect on a wealthy man’s clothing in early Anglo-Saxon England. The finds date back to about 500 CE.

“The nature of his burial and the place overlooking the Thames suggest that he was a respected chieftain of a local tribe and was probably a formidable warrior in his own right,” Thomas said.

That came as a bit of a surprise to archaeologists, because the middle of the Thames – the area along the river between modern Oxford and London – should not have been had local tribes with important military leaders at the time. Most historians and archaeologists had assumed that the area was just a border between two powerful neighboring tribes, not the home of a group with its own political and military might.

“This is the first burial of its kind found in the middle of the Thames, which is often overlooked in favor of the Upper Thames and London,” Thomas said. “It suggests that the people who lived in this region may have been more important than historians previously suggested.”

Ultimately, the Marlow Warlord’s domain was likely absorbed into the larger kingdoms that merged nearby, but his grave reminds us how murky our view of Britain is in the post-Rome years.

The find was also a stroke of luck. Although the Marlow Warlord once lain under a burial mound or mound, today the burial is relatively shallow meaning it can be easily destroyed by farming. In fact, it was shallow enough for hobbyists with metal detectors to find and excavate the fragile bronze bowls placed in the grave.

Normally, that would be the beginning of a horror story for archaeologists — the kind that ends with important clues about the past sitting on someone’s mantle or funneled into the black market. But Sue and Mick Washington, who discovered the site in 2018, weren’t looters. They immediately named the Portable Antiquities Scheme, a British Museum program that records small archaeological finds from the public.

The two iron spearheads tipped PAS archaeologists that the site was likely an early Anglo-Saxon grave, and in August 2020 archaeologists from the University of Reading excavated the grave and conducted a geophysical survey of the area. Artifacts from the grave are preserved and will be on display at the nearby Buckinghamshire Museum.

“This is a great example of the collaboration between archaeologists and metal detectors,” said PAS archaeologist Michael Lewis. “Particularly important is the fact that the finders stopped when they realized they had discovered something important and sought archaeological help. By doing so, they ensured that much more could be learned about this interesting burial.”