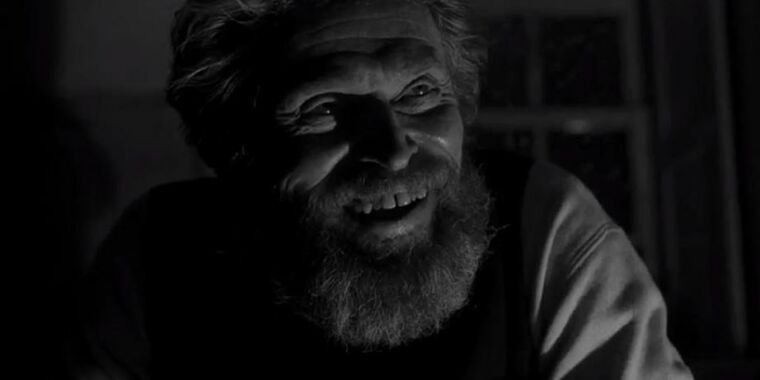 While millions of Americans are self-isolating at home — their families getting on their nerves and they’d do anything just to sit in a sports bar for a few hours — what movie does Amazon decide to offer for free, starting today, for Prime users? Something about crowds of friends getting together and laughing? About people frolicking in the great outdoors? A 90-minute montage of strangers shaking their sweaty hands? Go on, guess what!

no it is The lighthouseabout two men in the 1890s who go crazy from being locked together in a lighthouse for months!

Is this cruel irony the work of vengeful heavens? Or is it just that Amazon and manufacturing company A24 planned this months ago after? The lighthouse completed his 2019 theatrical run? Anyway, I’m here to tell you The lighthouse fits in these WTF times like a seagull’s beak fits in your eye socket. And I can almost guarantee you that when you’re done watching, you’ll look at your life and say, “Well, this could all be worse on the order of magnitude.”

Light on plot, heavy on crazy

The lighthouse is a parade of horror, and it’s hilarious. The head lighthouse dude (Willem Dafoe) is a crusty son who gets a kick out of tormenting the new guy (Robert Pattinson), possibly because the new guy isn’t an effective “wickie.” Or maybe he just finds Pattison’s dishonesty offensive.

The new man spends his days stirring coals, emptying pots and being harassed by a seagull. The old man, meanwhile, likes to stare directly into the lighthouse’s kajillion-watt bulb before inventing a new way to bust the new man’s balls. Off-hours are devoted to drinking, farting, masturbating, lusting after mermaids, and possibly visions of eldritch sea gods. Or not. Our boys are either ravaged by supernatural forces or are just wildly incompatible roommates. Doors creak, wind howls. Drowning nightmares and unholy visions follow, along with a thousand memes based on old cock jokes and miserable looking RPatz. One of my colleagues plans to replace his next Thanksgiving blessing with Willem Dafoe’s speech invoking Triton. The accents are bizarre and the facial hair is huge.

“Oh, what Protean forms swim out of the minds of men!”

Why do terrible things and terrible people make us laugh? Theories abound. Here’s one: We secretly wish we could pass our shit on to others without consequence, so we scratch that itch by watching movies about horrible people who are horrible. But I hope I don’t secretly yearn to be Bad Lieutenant, yelling at little old ladies while brandishing a .44 Magnum (although admit it, a dressed-up Nic Cage threatening seniors with a giant revolver gave you a giggle) .

Another theory about why we laugh during horror movies – and The lighthouse is a horror movie even though i clucked so much my face hurt and my bladder control was tested – is we don’t want anyone else to know we’re scared. So we hide that with a smile. We announce to everyone around us, “I’m not afraid!”

But the theory that suits me best is absurdity. We laugh at things we know to be wrong – irrational, immoral, atypical, blasphemous horrors – as a way of acknowledging, to whoever will, how much we know these things are wrong. Mental Floss has this lighthearted summary:

[S]Some theorists argue that we laugh because horror and humor originate from the same phenomena: incongruity and transgression. We laugh when something makes no sense, goes against our expectations, or breaks a social law (for example, when a character does or says something inappropriate). But in another context, those same things are perceived as scary—usually when something goes from harmless incongruity to potentially dangerous territory.

So a duck in a hat and your Lyft driver in a human flesh tank top are about the same? Of course, I’ll buy it. Comedy and horror both involve setting up a universe with certain expectations before those expectations are undermined or fulfilled beyond all reasonableness. That seems like an equally good explanation for how Jordan Peele slides so easily from funny to scary. (Review Key & Peele and tell me a lot of them weren’t horror all this time. I will wait.)

“How long have we been on this rock?”

Anyway, back to The lighthouse† The film is directed by director/co-writer Robert Eggers, who taught us how to live wonderfully with his 2015 feature film debut. The witch (OK, here’s the real trailer, but you get what I mean about horror and comedy). Both films deal with a conflict between a young skeptic and an authoritarian whose belief in the supernatural is unshakable. Both films convinced me that they are painstaking reconstructions not only of the clothing and locations of a bygone era, but also of their attitudes and dialect (Eggers shared behind-the-scenes details at Fantastic Fest and… he was painstaking until studying of the genitals of fish). Both films use dialogue drawn – sometimes literally – from contemporary sources, and you can imagine the scripts being filled with random capitalization and punctuation that has fallen into disuse.

When you isolate yourself at home and watch The lighthouse in the dark late at night while eating pinto beans straight from the can, don’t adjust your set. Although the film was released in 2019, Eggers shot it in black and white with a 4:3 screen ratio (actually 1.19:1, but who’s counting?). The effect not only harks back to the early days of cinema – which is just around the corner for the wickies – but mimics the claustrophobia of the lighthouse itself. Even the poster of the movie doesn’t give our two players enough space. As for black and white, our stupid world is in color, so seeing things in black and white is always a delay. Rest your eyeballs.

And now I’m defending Robert Pattinson. If we are to believe the internet, people who only see him as the sparkling vampire of Twilight are drinking heavily, sleeping badly and abandoning their lovers waiting for his turn next year the batter† But we’re all friends here, and let’s face it – how much criticism of… Twilight was just kink-shaming thirsty moms? Anyway, RPatz’s resume since then includes 1) a post-apocalyptic yoke in the robber2) to say “the jungle is hell, but people like it” in The Lost City Z from the director of Advertisement Astra3) to the room for Claire Denis in High lifeand 4) being scumbag-just in Good time from the Safdie brothers, who were going to make a movie called Uncut Motherf&*$ing Gems (NSFW). So let’s stop pretending he’s garbage.

As for Willem Dafoe, his stupidity at the 2019 Oscars is matched only by Adam Sandler’s.

Let’s close with the elephant in the room: perhaps praising a movie about incarceration and claustrophobia while so many of us self-isolate might seem a little insensitive. But millions of Americans with essential jobs cannot isolate themselves. And to keep them from seeing Willem Dafoe baking his brain by staring at a giant light bulb would be unreasonable.