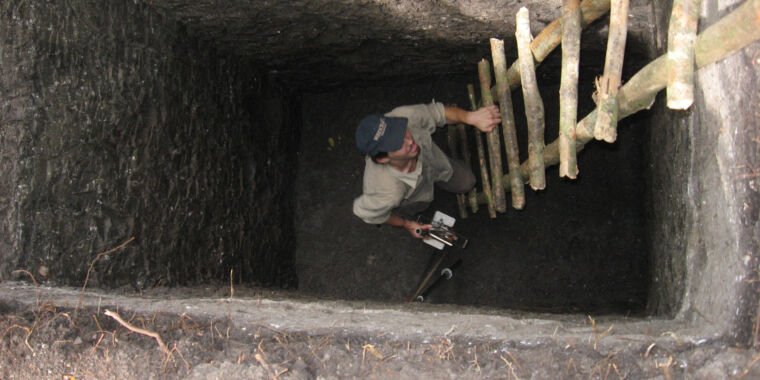 For centuries, Tikal was a bustling Mayan city in what is now northern Guatemala. But by the late 800s AD, the plazas and temples stood still, surrounded by largely abandoned farms. A recent study suggests a possible explanation for its decline: Mercury and toxic algae blooms poisoned the water sources that should have carried the city through dry seasons.

The Maya rulers of Tikal built the city’s reservoirs to store water from rain and runoff during the winter months. The pavement of the large squares in the heart of the city tilted slightly, channeling rainwater to the reservoirs. Over the centuries, dust and garbage also settled at the bottom of the reservoirs, providing an account of what the environment around Tikal looked like — and what flushed into the city’s water supply. University of Cincinnati biologist David Lentz and his colleagues sampled sediment layers dating to the mid-1980s, and they found that two of Tikal’s central reservoirs would be too polluted to drink from.

An X-ray fluorescence spectrometer (which identifies the chemicals in a sample based on how they react to zapping with an X-ray light) revealed that the sediment at the bottom of the reservoirs was laced with dangerous amounts of mercury. Lentz and his colleagues also found ancient DNA from blue-green algae or cyanobacteria, which can produce deadly toxins.

The loss of these reservoirs came at the worst possible time for Tikal. By the mid and late 800s, most of the major cities of the Maya world were already reeling under the weight of growing populations, declining farmland and decades of drought. Tikal could not survive the collapse of even part of its infrastructure.

But how did the reservoirs become so polluted in the first place?

Painting the walls with poison

“Color was important in the ancient Maya world,” said University of Cincinnati anthropologist Kenneth Tankersley, a co-author of the study. The Maya were especially fond of paint made from a blood-red mineral pigment called cinnabar. Painters used it in colorful murals, builders painted the plaster walls of palaces and temples with it, mourners decorated ceremonial funerals with it, and potters even used it to decorate ceramics.

Unfortunately for the Maya, cinnabar is poison. The beautiful red mineral, which produces such beautiful hues when mixed with iron oxide, is actually mercury sulfide. And Lentz and his colleagues say that over the centuries, mercury has leached from the vividly painted walls of Tikal’s most magnificent buildings and flowed straight into the reservoirs.

It had been building up in two of Tikal’s reservoirs for centuries before the city fell into permanent decline. Lentz and his colleagues found toxic levels of mercury in sediment layers dating from 600 CE to 900 CE, based on radiocarbon dating of bits of organic material mixed into the sediment.

“We were able to find a mineral fingerprint that showed beyond a reasonable doubt that the mercury in the water came from cinnabar,” Tankersley said.

Mostly, polluted urban water supplies are a problem for the poor — think of the cholera outbreak in London that sparked modern epidemiology, or modern lead pollution in the water supply of Flint, Michigan. But the reservoirs at Tikal irrigated the political and ceremonial heart of the city, as they were adjacent to a palace complex and major temples.

“The drinking and cooking water for the Tikal rulers and their elite entourage almost certainly came from the palace and temple cisterns,” Lentz and his colleagues wrote. “As a result, Tikal’s leading families were probably fed food laced with mercury at every meal.”

And ironically, the wealth and power that surrounded the reservoirs poisoned their water, but left the rest of the city’s water supply untouched. The plazas leading into the palace and temple cisterns were surrounded by palaces, temples, ball courts, and cemeteries, all decorated with murals and cinnabar-painted plaster. Two other large reservoirs in less prestigious areas of the city were mercury-free, according to Lentz and his colleagues.

Deadly blooms of blue-green algae also hit the reservoirs in the city’s elite center, leaving more ordinary districts untouched. And that too is a problem that the rulers of Tikal have accidentally created for themselves.

Based on the XRF analysis, the two reservoirs also contain high levels of chemicals called phosphates; that usually means the water was contaminated with food waste, feces, and other organic matter. That would have made the reservoirs pretty dirty, but it also provided nutrients that fed massive blooms of blue-green algae, like Planktothrix and Microcystis.

The phosphate levels in the Palace Reservoir quadrupled between 600 and 830 CE, and it’s not hard to see why. Archaeologists found the remains of an ancient kitchen on the northern edge of the Palace Reservoir, where meals are said to have been prepared for the royal residents of the Central Acropolis, Tikal’s main palace complex.

“Hundreds of years of smoky cooking fires and ceramic plates washed into the reservoir added organic matter to the water,” Lentz and his colleagues wrote. “To make matters worse, the Mayan chefs apparently threw food waste just outside the kitchen, as evidenced by the presence of an adjacent waste bin. During the rainy seasons, the wastewater from this dump would have been flushed directly into the reservoir.”

Not a drop to drink

The droughts of 820 to 870 CE caused the reservoir’s waters to recede and stagnate — and, thanks to the palace kitchens, also brimming with phosphates and other organic matter. In other words, the reservoirs became the perfect place for cyanobacteria to thrive in deadly abundance. In those sediment layers, Lentz and his colleagues found traces of ancient DNA from Planktothrix and Microcystis species.

Both types of blue-green algae produce compounds called microcystins, which are released into the water when the algae cells die. Most microcystins are toxic to the liver, but some are also neurotoxins and can irritate the eyes, skin and throat as well. They are lethal at very low concentrations and impervious to the usual water purification tricks, such as boiling.

“With the presence of microcystins in Tikal’s reservoirs, the water could not have been safely consumed,” Lentz and his colleagues wrote.

“A complex tapestry of intertwined calamities”

Even if the other reservoirs are still clean, the loss of the palace and temple reservoirs would have been a major blow to Tikal’s infrastructure. The city did not have easy access to rivers, lakes or other water sources, and the local water table is 200 meters deep, beyond the reach of ancient Mayan technology. And for about 50 years, Tikal’s residents had drier, less predictable rainy seasons and harsher dry seasons, so the city really couldn’t miss two major reservoirs.

The water pollution made life more difficult for the inhabitants of Tikal, who already suffered from food shortages and other miseries. It probably also had political ramifications for the city’s rulers, whose elaborate decorations and kitchen scraps had caused the problem in the first place.

Mayan rulers were expected to provide clean water and fertile crops by keeping the gods happy. In the late 800s, people may have taken the dirty, poisoned reservoirs and decades of drought as a sign that their rulers had failed in that all-important task. It may have seemed as if the city and its rulers had fallen out of favor with the gods, and many people may have decided there was little reason to stay and enough reason to leave. By 950 CE, Tikal was on its way to becoming picturesque ruins.

“This scenario likely played out in other Mayan cities that depend on reservoirs,” Lentz and his colleagues wrote. “This study presents new methodologies that can be used to test this hypothesis elsewhere.”