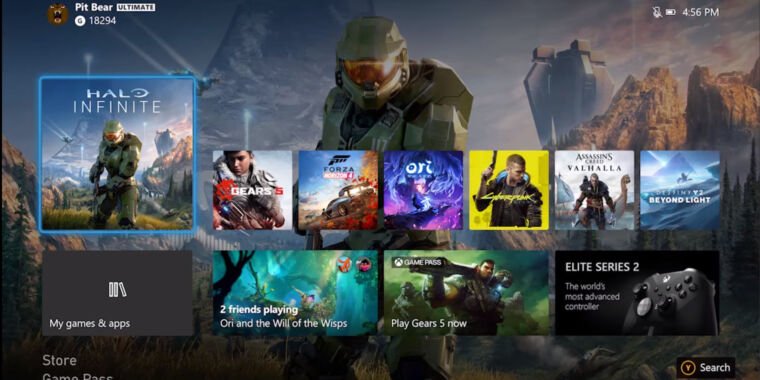 Speed ​​is a big focus of this upcoming round of improvements. Microsoft says the familiar home screen now loads more than 50% faster when the Xbox One boots up and almost 30% faster when coming back from a game. That’s in addition to improvements to the Xbox One app store interface, which now loads in just over two seconds after an update last month.

The new menu will also have a 40 percent smaller memory footprint, Microsoft says, in order to “maximize the console power available for games.” That mirrors improvements to the system’s GPU bandwidth allocation from way back in 2014, giving game developers more processing power originally intended for the background system menu.

Visual changes to the interface are generally a bit more subtle, as you can see in the gallery above. Microsoft says the new interface means “text is more readable, on-screen elements are easier to understand at a glance, and getting your tasks done will be faster than ever. This includes tiling, fonts, an updated artwork style, and more. “

Microsoft is also improving the integration of the Xbox mobile app with PC and console games. For example, when you capture a clip on your console, it’s automatically sent to your mobile app, where you can add text to a social media update without having to struggle with your TV’s on-screen keyboard. The mobile app will also consolidate notifications across the PC and console, Microsoft says.

The UI changes that have been teased around the release of the Xbox Series X certainly pale in comparison to the “clean slate” UI overhaul Microsoft released with the Xbox One in 2013. On the other hand, the Series X itself is being positioned as more of an evolutionary upgrade from the Xbox One, with most games running on both consoles for the foreseeable future. Still, it’s strange to see a brand new console with a system menu that looks more or less identical to the one it replaces.