Medieval plaque sheds light on how our microbiomes have changed | Techilink 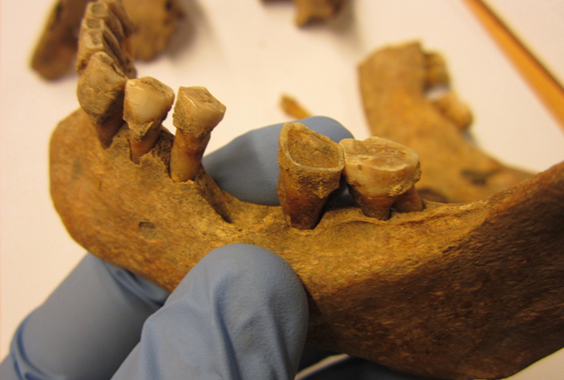 The communities of bacteria that live in our mouths have changed dramatically since the Middle Ages, according to a new study of remains buried in a medieval Danish cemetery. And it turns out that some people are more prone to dental and gum disease than others, thanks in part to the bacterial communities that lived in their mouths.

Biochemist Rosa Jersie-Christensen of the Novo Nordisk Foundation Center for Protein Research sampled hardened plaque, called tartar, from the skeletal remains of 21 Danish men who lived in the village of Tjærby between 1100 and 1450 CE. She and her colleagues chose men for the study because the male immune system generally has stronger inflammatory responses, which would make it easier to find proteins linked to inflammation.

In general, the men’s dental health was not great – about what you would expect from a group of medieval villagers. All 21 showed some signs of gum disease or periodontitis, along with at least small cavities. Several had lost teeth some time before their deaths.

The calculus had preserved thousands of proteins from the men’s bodies, their food, and the bacteria that lived in their mouths. Using mass spectrometry and a database of known proteins, Jersie-Christensen and her colleagues identified 3,761 different proteins in the samples. A few came from food and others came from the host’s body. About 50 proteins came from blood plasma and their presence suggests bleeding gums. But most of the proteins — between 85 and 95 percent — were produced by bacteria from the microbiome. There were a total of proteins from about 220 different species.

“Eventually we were able to reconstruct which bacteria thrive in the mouths of medieval villagers and what physiological/pathological processes were going on there,” Cappellini told Ars Technica.

Not all microbiomes are created equal

All 21 men showed traces of bacteria known to cause gum disease and tooth decay. But most of the proteins in samples of 16 of them came from different types of bacteria that are associated with a higher risk of tooth and gum disease. It’s probably no coincidence that nearly half of that group (seven out of 16 men) showed signs of fairly severe tooth decay.

The second group had only one case of severe tooth decay. Cappellini says the proteins in those men’s dental plaque reflect a predisposition to good health more than those of their neighbors. Those proteins mostly came from relatively harmless bacteria, including: Streptococcus sanguinisa species that almost always outnumbers the major bacteria that cause dental cavities (its cousin Streptococcus mutans). That may help explain the relative lack of large cavities in the second group.

And the samples from that group also contained an abundance of human proteins associated with inflammation and other first-line responses to bacterial infections, as well as blood clotting. Cappellini says the presence of so many of those proteins — which are also found in large amounts in plaque from healthy modern volunteers — may mean the second group had stronger immune responses, which could also have protected against more serious disease.

The two groups of men probably ate the same things, used the same (very poor) oral hygiene and were exposed to the same pathogens. But the men in the first group had a microbiome that made them more vulnerable to infection, while the men in the second group may have received some protection from their oral bacteria, Cappellini told Ars Technica.

But despite their differences, all medieval plaque samples had much more in common than with the modern ones. While it’s possible that the medieval samples skewed in favor of the proteins most likely to survive a few hundred years of degradation, lifestyle changes may account for most of the difference.

Today, people’s oral microbiomes differ much more from person to person than they did in the Middle Ages. The medieval men of Tjærby shared very similar lifestyles and monotonous diets; the traces of food proteins left in their dental plaque suggested dairy and goat’s milk, along with oats. In the 21st century, our diets contain far more variety than the average medieval villager could have imagined, and one person’s diet may look very different from another. Different personal histories of antibiotic use, along with environmental factors and genetics, also shape microbial ecosystems in drastically different ways from person to person.

Scientists don’t yet know exactly how all these factors together influence the invisible ecosystems that call our bodies home. In part, that’s because we don’t even fully understand what organisms live in us; RNA studies have only recently discovered many types of oral bacteria, some of which are nearly impossible to grow in the lab. But the sheer individuality of our microbiomes also poses a challenge. Some research has suggested that the makeup of a person’s microbiome may be as unique as a fingerprint, making it difficult to make large-scale comparisons of mouth microbiome across populations.

But Jersie-Christensen and her colleagues say their research shows that general differences in bacterial populations can suggest something about a person’s overall oral health. And by combining studies of the proteins in a person’s mouth with metagenomic studies of the microbiome, researchers may eventually uncover more links between lifestyle, microbes and health.