Medieval craftsmen built a glass-walled palace in the desert | Techilink 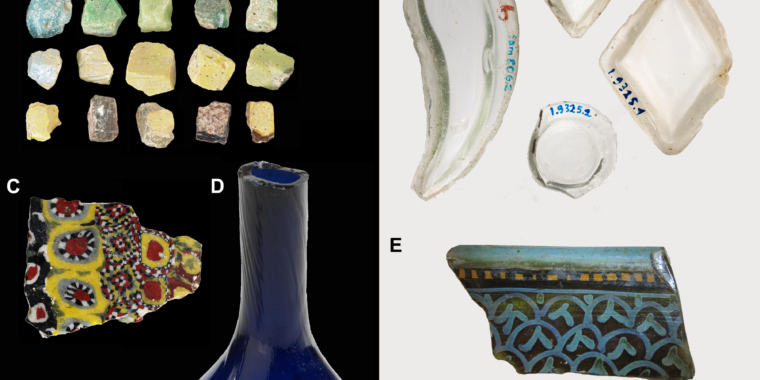 In 836CE, the Abbasid Caliph al-Mu’tasim ordered the construction of a new capital on the eastern bank of the Tigris River, in modern-day Iraq. Since 762, al-Mu’tasim’s predecessors had ruled from Baghdad, but the presence of the Caliph’s newly formed Turkish regiments had caused unrest in the city, so he wanted to pack up his troops and move to a new capital. This also allowed him to build his own grand palace complex with inlaid glass walls and intricate mosaics.

Archaeologist Nadine Schibille of the University of Orleans and her colleagues recently analyzed fragments of the glass that once adorned the gleaming walls of Samarra’s palaces and mosques, and their chemical makeup offers some hints about the harsh realities of the industry and commerce that make the glass. built palaces.

Fit for a Caliph

Glass inlays of clear and purple geometric shapes and multicolored millefiori tiles, along with elaborate mosaics, adorned the walls of the audience hall in the Dar al-Kilafa Palace. That glittering opulence may have been an allusion to the story of King Solomon’s glass palace, but the appearance of al-Mu’tasim’s audience hall also created a physical manifestation of the Caliph’s power. The awe and wonder visitors experienced as they stepped into the glass-walled audience hall were meant to transfer to the ruler himself.

The Abbasid rulers left Samarra to return to Baghdad in 892CE; today, pieces of the glass that once adorned its palaces and mosques can be seen in museums around the world, thanks mainly to archaeological excavations in the early 1920s.e century. Schibille took tiny samples from 256 of those items and analyzed their chemical makeup using a method called laser inductively coupled plasma mass spectrometry. (That’s a scientific way of saying that they mounted small pieces of glass in epoxy, then blasted them with lasers and measured the chemical makeup of the vaporized material.)

Proportions of different elements in a piece of glass can tell scientists where the material for that glass came from, what impurities or additives it contained, and how it was manufactured. And that in turn can reveal a lot about the construction of a 9e century palace. It turns out that the Caliph’s building project supported a fine glass industry near the banks of the Tigris. It also reused remnants of the Caliphate’s past and the products of ancient trade networks.

Nearly all the glass for the inlays of the audience hall and the palace windows was sourced locally, from very high-quality materials, using a process that had been used in the region just a few decades earlier. For centuries, glassmakers in the Levant and Egypt combined silica with natron, but around the late 8e century or early 9e century, glassmakers in the region began to replace plant ash with natron. The proportion of magnesia in inlays and window glass of the palaces of Samarra suggests plant ash, rather than natron, as the source of sodium carbonate in the glass-making process. That means the inlays and windows were probably made around the time of the city’s founding.

And the chemical characteristics in those pieces of glass matched silica from the region around Samarra. This fits in well with historical accounts of glass production in the village of al-Qadisiyya, about 25 km (16 miles) from the city and its glass palaces. A local industry could have expanded to fulfill royal commissions, and it seems those ancient glassmakers knew their job well. They seem to have used the purest sources of silica for clear inlays and windows, as impurities would discolor the glass. In Schibille and her colleagues’ analysis, the chemical composition of those samples suggested high-purity silica, such as clean silica sand or quartz pebbles.

However, for the colored glass inlays, the glassmakers didn’t have to worry so much about impurities, as they would add colorants to the glass anyway. So, based on the chemical analysis, it seems they used less expensive sources of silica – very high quality but a little less pure than what went into the clear glass. That suggests that the glassmakers wanted to balance cost and quality, and the same pattern is reflected in glass containers and dishes from Samarra.

Despite the thriving local industry, tesserae for Samarra’s elaborate mosaics appeared to have been scavenged and recycled from several older palaces and mosques in Syria and Egypt. The tesserae have varying concentrations of the elements aluminum and calcium, as well as some heavier elements. That suggests they came from different sources of silica and so probably from different geographic areas. Some match glass of 4e century to 8e century CE sites in Israel, others correspond to 6″ glasse and 7e century CE sites throughout Europe and the Mediterranean, and yet another set has a chemical composition more like Egyptian glass from the 8e century AD. They all predate the 9e century CE foundation of Samarra.

“They would instead have been snatched from disused buildings and imported to Samarra from the western regions of the Abbasid Caliphate, from Syria-Palestine and/or Egypt,” Schibille and her colleagues suggested. Some of those buildings may have been the work of rulers of the Umayyad dynasty, who overthrew al-Mu’tasim’s ancestors in 750CE. Umayyad mosques were known for their wall mosaics, and historical records claim that an early 8e century Byzantine emperor sent tiles and skilled workers to the Umayyad Caliph for the mosques of Damascus in Syria and Medina in Saudi Arabia.

The fact that the silica used to make the Samarra tesserae appears to have come from Byzantine territory and that it corresponds to styles and techniques used during the Umayyad period suggests that some tiles for the Umayyad mosques in in fact may have come from the Byzantine Empire in trade. It also suggests that later Abbasid rulers took them east to Samarra to decorate their own fabulous glass-walled palaces.

But that too was destined to not last long. Caliph al-Mu’tasim poured money and resources into Samarra, as did several of his successors, and that constant influx of royal gold and royal attention kept the city thriving, even in the desert. But when the Abbasids shifted their seat back to Baghdad in 892 CE, the once-great city of Samarra virtually dried up without imported water and food, and most of the old city was abandoned within a few decades.