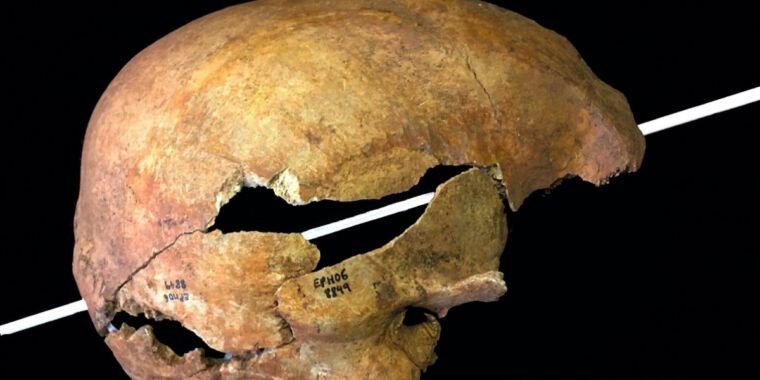 The English longbow was a powerful medieval weapon that could allegedly pierce an opponent’s armor and may have been a decisive factor in several important military victories, most notably the Battle of Agincourt. A recent article published in the Antiquaries Journal by a team of archaeologists from the University of Exeter in the United Kingdom has provided evidence that longbow arrows caused similar wounds to modern gunshot wounds and were able to penetrate long bones.

Historians continue to debate how effective the longbow was in battle. There have been numerous reenactment experiments with replicas, but no longbows from the Middle Ages have survived, although many 16th-century specimens were recovered from the wreckage of the Mary Rose† Oliver Creighton of the University of Exeter, who led the latest study, and his co-authors argue that such experiments are typically done over shorter distances, so the arrows aren’t completely stable and spin in flight. This, in turn, would affect the types of injuries combatants sustained. He and his team believe their analysis demonstrates the importance of osteologic evidence in helping resolve such debates.

It is relatively rare to find direct evidence of violent trauma from weapons to skeletal remains in medieval cemeteries, with the exception of mass graves from known historical battles. The best known of such sites are associated with the Battle of Visby in 1361 in Gotland, Sweden, and the Battle of Towton in 1461 in North Yorkshire, England. According to the authors, data from these sites has provided useful information about “the realities of medieval warfare — how people fought and were killed, what weapons were used and what kinds of injuries they caused, and what armor (if any) was worn.” Evidence of trauma specifically caused by arrowheads is even rarer.

The current study examined 22 bone fragments and three teeth, all of which showed clear signs of trauma. They were all collected during the excavation of the cemetery of a medieval Dominican monastery in Exeter from 1997 to 2007, in preparation for the construction of the Princesshay shopping area. Founded in 1232 and officially consecrated in 1259, according to the authors, wealthy laymen of high status probably resided in the monastery’s cemeteries.

One excavation site (EPH06 8849) in particular, in the northern aisle of the monastery nave, contained many inarticulate bones (as opposed to complete skeletons). These were mostly skull bone, lower limbs, upper limbs and hands, from different time periods, indicating the so-called “cutting” of later graves, a common practice in medieval cemeteries.

One of the 22 bone fragments was a skull with a puncture wound on top of the right eye and an exit wound at the back of the head. The authors suspect that the arrow likely rotated clockwise when struck, based on the associated crumbling and breaking. Medieval arrows were feathers, which gave a twist to the projectile to make it more accurate and stable in flight. But this could be the first evidence that the arrow was deliberately staggered so that it would spin clockwise.

“Weapons manufacturers, in particular, have historically pulled barrels so that bullets spin in the same direction — clockwise,” the authors wrote. There is also evidence that the shaft of the arrow lodged in the skull and retracted through the front of the head, creating further fractures in the skull.

The authors suggest that the arrow in question was a square or diamond-shaped “bodkin” type, a common military weapon. Such arrowheads can sometimes be confused with crossbow bolt heads, but in this case the authors determined that the penetration points are not large enough to cause the trauma from a crossbow. “That the arrowheads were military tips suggests that the assemblage likely contains at least one casualty of war, or at least a victim of a field accident or murder committed by a person with access to military-style equipment,” the authors wrote.

There was another stab wound near the top of a right tibia, suggesting an arrow from behind had passed through the flesh of the calf and lodged in the bone. And one of the femurs showed signs of trauma “consistent with a flashing impact from an arrow,” although the authors acknowledge that a similar injury may have come from some sort of “bladed knife.”

In fact, all three of the above monsters may have come from the same victim. “A scenario is that [the fatal wound to the skull] occurred first and that the wounds to the tibia and femur occurred later, when the individual was dead or dying and lying face down,” the authors wrote. “While this can only be a matter of speculation, this could be probably explain the otherwise different angles of entry, which are difficult to explain if the individual was standing.” Alternatively, the individual would have “been mounted on a horse or in an elevated position or on a raised structure”.

“These results have profound implications for our understanding of the power of the medieval longbow, for how we recognize arrow trauma in archaeological finds, and for where war dead were buried,” Creighton told Medievalists.net. “In the medieval world, death caused by an arrow in the eye or face could have a special meaning. Ecclesiastical writers sometimes saw the injury as a God-ordained punishment, with the ‘arrow in the eye’ being sustained or not. by King Harold II on the battlefield of Hastings in 1066. Our study portrays the horrific reality of such an injury.”