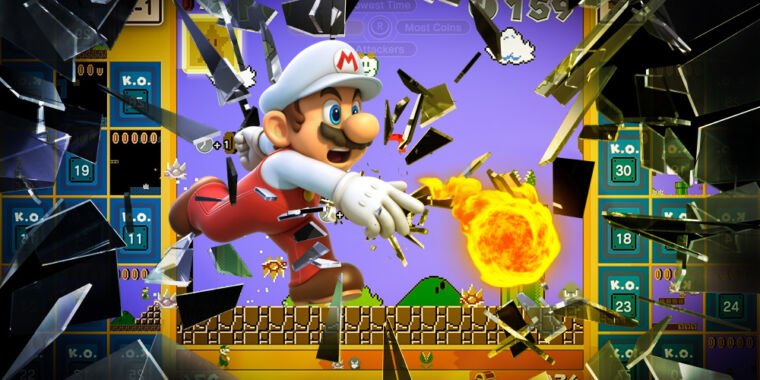 Back in 2018, at the beginning of the PlayerUnknown’s Battlegrounds phenomenon, designer Brendan Greene told Ars Technica that he thought any genre — not just shooters — could potentially benefit from sampling the last man standing concept of the battle royale genre. Since then, games like Tetris 99 and autumn boys have proven how flexible and robust that idea can be across the industry.

Super Mario Bros. 35 (available today for free until March 2021 as part of a Nintendo Switch Online subscription) should be a welcome addition to that collection, bringing the tried-and-true gameplay of the Mario series with the endless competition of the battle royale genre. Unfortunately, some weird design decisions made my first day with the game a repetitive, over-simplistic mess, and it doesn’t feel like the game will have much staying power.

Everyone greets the Fireflower

Here are the basics: Super Mario Bros. 35 looks a lot more like Tetris 99 then it does PUBG or Fortnite† (No, 99 Marios don’t fall from a Koopa airship to find a single Princess Peach.) You and 34 online competitors get your own self-contained instance of levels from the original Super Mario Bros., and everyone plays the classic game in isolation at the same time, unlike 35 Marios jumping around the same playing field. (You can see everyone’s progress in small preview windows around the screen, and you’ll recognize when they’re underground or in a dungeon while you’re elsewhere).

The name of the game is surviving as long as possible, and that survival is complicated here by a strict timer that starts at just 45 seconds. The main way to earn more time is by killing enemies, which can add between one and five seconds to your personal timer for each kill. Killing an enemy also sends a copy of that same enemy down a few screens on an opponent’s current board, a competitive move somewhat similar to the “garbage blocks” you can send opponents into Tetris 99†

On paper, this seems like a great system for the kind of risk-versus-reward, push-and-pull needed for a good battle royale competition system. In practice, though, those extra enemies (grayed out on your screen) aren’t quite the existential threat the game wants them to be.

Part of this is because the placement of those enemies is completely random; Goombas often appear in a location where they will innocently walk off a cliff seconds after appearing, Koopa Troopas will harmlessly scour the ocean floor in a water level, etc. Most of the time, however, I found it way too easy to run entire lines of “garbage” enemies with a fire flower.

De Vuurbloem just feels overpowered in Super Mario Bros. 35, which lets you dispatch dozens of additional enemies by standing still for a few seconds and tapping the Y button repeatedly. Everything from Goombas and Koopa Troopas to Hammer Bros. and even Bowser himself, can almost always be defeated easily and from afar by a flurry of fireballs. Floating Bloopers and Cheep Cheeps can be a little harder to avoid thanks to the more complex moves through the air, but they’ve appeared more rarely so far (and fireproof Buzzy Beetles haven’t appeared at all).

If you can take out extra enemies that easily, it means that it will be harder for those enemies to take your Fireflower away. However, if you get hit, extra powerups aren’t too hard to come by in the game’s endlessly repetitive early levels (more on that later).

Even if a power-up isn’t useful, you can tap X to spend 20 coins earned and get a random item. A quarter of the time this will return you to your overwhelmed, Fireflower state. The rest of the time you get a Mushroom, Starman or POW block for clearing the screen, all useful enough on their own (getting a Mushroom or Fireflower when you don’t need that upgrade also gives you extra time ).

To be fair, there are still a few threats that a Fire Flower can’t help. Bottomless pits are still a risk, and one missed jump can end a run immediately. Firebars and Podoboos in the strange castle phase also need to be managed with good timing.

But even these threats were met in the first few hours Super Mario Bros. 35† That’s because those threats aren’t especially present in the first two levels of the game (aka 1-1 and 1-2), which I played over and over this morning.

Progress from level to level in a Super Mario Bros. 35 match does not proceed in the same order as in the original game. Instead, as far as I know, everyone picks a level at the start of the match and then the game randomly scrolls through those chosen levels in the same order for each player.

The biggest problem with this at the beginning is that every new Super Mario Bros. 35 player only starts with a single selectable level unlocked: level 1-1. Players can unlock additional level selections as they play, but it’s not clear exactly how. After nearly three hours of high-level play this morning, taking my account to “level 34”, I’ve only unlocked the first 10 of the game’s 32 levels for selection.

For now, in practice this means that the level selection is overwhelmingly weighted towards the first two levels of the game. In my game this morning, I completed Level 1-1 41 times and Level 1-2 23 times, according to the in-game count. I’ve completed all the other levels (out of a selection of eight different levels) a total of 46 times, meaning over 58 percent of my gameplay consists of those first two levels.

Don’t get me wrong, these first two levels are classics of game design, a testament to the Mario series. But unless you’re a professional speedrunner, they aren’t captivating enough to play dozens of times in a few hours. Theoretically, the addition of new enemies sent by opponents would mess things up, but as long as you’ve got a fireflower it’s still way too easy to blast through the levels just like you’ve done every last time.

Perhaps the selection of levels will get more as the days and weeks go by and as Nintendo or other players unlock more levels. For now, though, this constant iteration of the level makes a terribly dull first impression.