Many nicknames for Pluto’s features are now official | Techilink 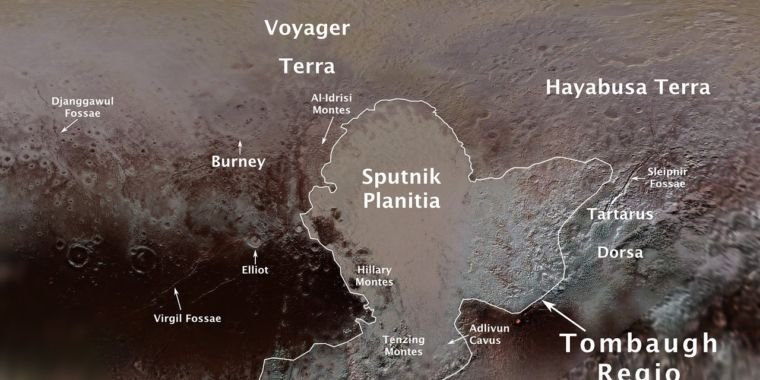 On Thursday, the International Astronomical Union announced that it has officially accepted the names of 14 features on the surface of the dwarf planet Pluto. While members of the science team behind the New Horizons probe had used different names, both informally and in academic publications, there was always the chance that those names would be tweaked or completely changed. Now 14 of the monikers have officially entered the record.

At least one of the names has already undergone a change since the first few weeks after New Horizons’ visit. The large, heart-shaped plane was originally named Sputnik Planum in honor of humanity’s first orbital hardware. But well before this new announcement, that was changed to Sputnik Planitia to bring it into line with naming conventions.

Sputnik Planitia is a clear example of the overarching theme identified for naming Pluto’s features: famous explorers, humans or not. Other spacecraft honored include Hayabusa and Voyager, each of which is awarded a Terra, or large area of ​​rugged terrain. There are also proposals for Pioneer, Venera and Viking Terra, but they have not yet been formally accepted.

Human explorers get montes or mountains. Approved names include the Al-Idrisi Montes, located northwest of Sputnik Planitia and named after a famous Arab explorer and cartographer. Heading south along the western edge of the Planitia, you reach Hillary Montes and Tenzing Montes, named after Edmund Hillary and Tenzing Norgay, the first people to climb the tallest mountain on Earth.

Discoveries related to Pluto will apparently let you get a mark on it in the form of a crater. Venetia Burney was only 11 years old when she suggested naming the newly discovered planet Pluto; there is now a Burney Crater in her honor. Elliot Crater is named after James Elliot, who helped develop the technique that discovered Pluto’s atmosphere. Clyde Tombaugh, who discovered Pluto in 1930, gets more than a crater; Tombaugh Reggio is a large area of ​​rough terrain that forms the southeastern border of Sputnik Planitia.

The rest are fossae (Latin for trench), or deep cuts in Pluto’s surface. These include Virgil Fossae, named after the poet Virgil, who served as Dante’s guide through hell in the Divine Comedy. Djanggawul Fossae is named after creatures that traveled to Australia from the underworld in aboriginal stories. And Sleipnir Fossa is named after an eight-legged horse that Odin carried to the underworld in Norse sagas.

That leaves much of Pluto unnamed. As you can see in the map above, many other features have suggested names. These come from the New Horizons team or public input on a site hosted by the SETI Institute. In time, most of these will be officially adopted and names will also be given to features on Pluto’s moons. There’s also the prospect that further analysis of the New Horizons data will identify even more features begging for a name.