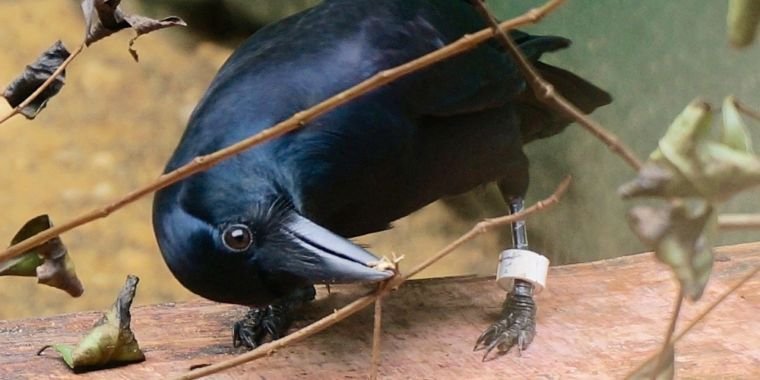 Tool use in animals is not common, but it is widespread throughout our evolutionary tree. Critters from sea otters to cephalopods have been observed using tools in the wild. However, in most of these cases, the animal is simply using something found in its environment, rather than creating a specific tool for a task. Tool making has mainly been seen in primates.

Mostly, but not quite. An important exception is the New Caledonian crow. To extract food from holes and crevices, these birds use twigs or stems found without modification in their environment. In other environments, however, they will remove branches from plants and gently strip parts of the plant to leave a crochet stick. The behavior lasts more than a minute and the crows will usually carry the tool with them when exploring new sites, and they will sometimes save it for future use.

To understand how this complex behavior in crows came about, we need to understand the evolutionary benefits that a good tool can have. A group of researchers, mainly from the University of St Andrews, have now done just that: The researchers have quantified how tool manufacturing affects food harvesting. The results show that using bird-made tools can increase food extraction up to 12 times faster than the crows could achieve using unmodified sticks.

The researchers’ approach was simple. They constructed a series of tree trunks with boreholes of various sizes and stuffed food into the bottom of the holes. The crows were either given chunks of a bush from which they usually made tools, or the birds were given a set of straight sticks that could be used as tools, but were not modified. The researchers tracked how long the food in the bottom of a hole stayed there after the birds started trying to get it out. This “survival time” should be a rough measure of the efficiency of the tool being used.

In general, there was no competition. Tools made by crows were three to 13 times more effective at pulling out food than the twigs the researchers provided. Making a crow-shaped crochet tool by hand was six to nine times more efficient than an unmodified twig. While the range of results was smaller with the man-made tools, the average efficiency was statistically indistinguishable from what the crows achieved when they made their own tools.

The authors say this clearly demonstrates a significant advantage for manufactured tools. And that, they argue, means tool making could fall under evolutionary selection.

However, ‘could’ does not mean ‘is’. The authors are excited that tool making is a genetic trait that is directly selected for, because it would be relatively easy to search for. But we don’t know anything about the origins of tool-making in these crows, and we do know that other birds learn socially, including learning using tools (that’s been seen in cockatoos). So there is a chance that social behavior may have been under selective pressure and the ability of tool use to spread among the population was only a non-specific side effect.