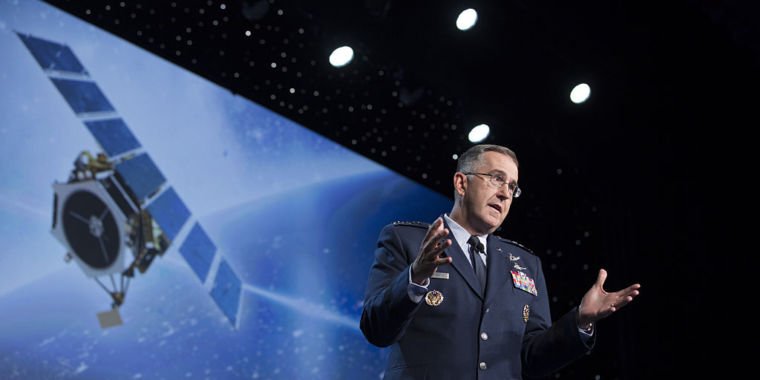 In recent years, the traditional aerospace industry has seen disruption from new aerospace companies, most notably SpaceX, but also other players such as Blue Origin and Virgin Galactic. These new companies have been working hard to reduce the cost of accessing space through a variety of reusable launch systems.

At the urging of Congress, NASA has been slow to adapt to the new space industry’s attitude to cost and risk. The agency continues to fund hardware modeled after basic technologies that date back decades, most notably with the heavy rocket NASA is building, the Space Launch System. This rocket is now six years in development, will take at least another two years from the launch pad and will cost billions of dollars to fly.

While civilian space hasn’t embraced fast, low-cost spaceflight, the U.S. military seems increasingly willing to support the new technology. The most recent evidence of this came Tuesday, when General John Hyten, the head of the US Strategic Command, met with reporters in Washington, DC. To succeed, Hyten said, the US military must accept failure. This is a similar ethos to that of new space entrepreneurs like SpaceX’s Elon Musk, who famously said, “Failure is an option here. If things don’t fail, you’re not innovating enough.”

Hyten repeated those words, according to a report by Space news: “We have lost the ability to go fast, to test and to fail. We tie the hands of our engineers and acquisition people because we expect every test to work, and if it doesn’t work, it’s on the front page of the paper. We need to get back to where we accept risk.”

As leader of the US Strategic Command, Hyten oversees the country’s military space operations.

Zero to the moon

In the course of the discussion, Hyten lamented cumbersome, expensive government contracts in the modern era compared to a less risk-averse, more agile era of the past. “We really went from zero to the moon in about six or seven years,” he said. “They went from failing on the Apollo 1 launch pad in January 1967 to walking on the moon in July 1969, 30 months later. From the most terrible failure we had in the space program to the greatest success humanity will ever have in space: walking on the moon for the first time. We could go fast.”

Hyten praised both SpaceX and Blue Origin for taking risks and fixing glitches. Earlier this year, he criticized media coverage of the hardware failure of Blue Origin’s power pack. “Blue Origin just had an outage. Son of a gun. That’s part of learning,” the general said. “It really upsets me when I see the headlines appearing after Blue Origin’s failure recently: ‘Blue Origin takes big step back, big failure!’ I go, ‘no, they’re pushing the envelope.’” (Ars reported on the failure as a “setback” that would have no lasting impact on the company.)

These comments come after other military officials have embraced the ideas of new space. Earlier this month, Air Force Secretary Heather Wilson revealed that the upcoming fifth mission of the X-37B spy plane will be launched into space by a Falcon 9 rocket instead of an Atlas V rocket. She also praised the value of competition in lowering launch prices.

In addition, the Air Force’s Air University conducted a study showing that developments by SpaceX, Blue Origin and other companies, such as Vulcan Aerospace and Virgin Galactic, had given the United States a definitive edge over global competitors in this new field of reusable rockets. technology. However, the report warned that other countries, such as China, could copy these ideas and surpass the United States if strategic government investments are not made. The report urged the Air Force to embrace failure and make investments to secure the U.S. lead in reusability and fast, low-cost access to space.