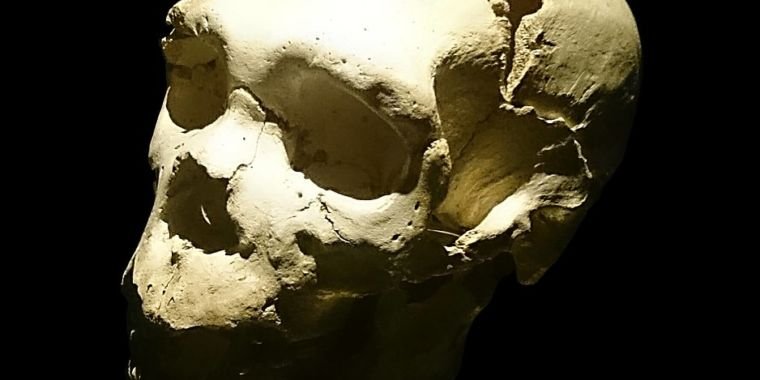 Every human culture has a special way of laying its dead to rest. Some cremate the remains, some lay them under the open sky and others place them in the ground. Whatever form, that final ritual implies an understanding of our own mortality, one of the things that seems to clearly distinguish humans from other animals. Along with art and jewelry, intentional burial is one of the few ways we can track the evolution of human thought through archaeological finds.

But it is difficult to determine objectively what is intentional burial and what is an accidental collection of bones. Now scientists have tried to hand the task over to an impartial judge: a machine learning algorithm. The analysis indicates that possible signs of burial in other hominins are more likely due to chance.

Archaeologists are very interested in figuring out when people started burying our dead. Right now, the best candidates for the oldest known burials of modern humans come from the Skhul and Qafzeh caves in Israel, where humans appear to have been buried with ocher and other objects about 100,000 years ago.

But some researchers have even suggested that maybe we weren’t the first people to have something like a funeral at all. In several locations in Europe, archaeologists have found Neanderthal fossils in what may be 50,000-year-old graves rather than accidental accumulations of bones, although none of the graves have been accepted without discussion among archaeologists.

But putting the dead to rest looks very different from one culture to another, so it can be difficult to know for sure whether we’re looking at a grave or a chance group of bones. “We’re talking about different kinds of people, though, so it’s certainly possible that culturally mediated corpse removal manifested itself differently in them than in modern humans,” anthropologist Charles Egeland of the University of North Carolina at Greensboro told Ars Technica.

For example, modern people often visit graves of friends and loved ones, so archaeologists often find traces of the living, such as stone tools, animal bones or other debris, near burials. But at some of the sites that have been suggested as possible hominin graves, there is no sign of such activity. That could mean that other hominids just didn’t deal with their dead in the same way we do — after all, even among modern humans there is a lot of variation across cultures — or it could mean that these sites aren’t really graves.

“It would be nice to bury the bodies in some sort of artificial structure that looks like a funeral, but again, this kind of behavior may not have been part of the cultural traditions of these types of people,” Egeland said.

Egeland and his colleagues decided to let a computer tell, based on the specific bones found in each location. The team fed information about some possible early human burials to a machine learning algorithm — a program that allows a computer to “learn” patterns in complex data sets using statistical rules — along with data from several other sites where they knew what fate was. the bones had happened. Those places included prehistoric human burials, undisturbed modern corpses, places where prehistoric bones had naturally accumulated, modern human corpses captured by wildlife, modern baboons eaten by leopards, and modern baboons that had died of natural causes. in a cave.

The sites on the list of possible burials include Skhul Cave, along with a few much older and even more hotly debated prospects. In Spain, a limestone cave called Sima de los Huesos (“Pit of the Bones” in Spanish) contained the fossilized remains of 28 individuals. Based on their size and characteristics, they are likely the remains of either very early Neanderthals or their common ancestor with modern humans, dating back to between 300,000 and 600,000 years old.

Separately, the discoverers of gay naledi say the collection of fossils in South Africa’s remote, nearly inaccessible Dinaledi Chamber, part of the Rising Star cave system, may also be the result of deliberate burial.

Both collections of bones were found deep in the recesses of fairly remote caves, which don’t seem like the kind of place you accidentally end up with; they are more like the kind of place you might go to leave the dead far from the world of the living. And nearly all of the remains at both sites are from hominids of the same species; they are not mixed with wildlife as you would expect if scavengers had dragged the bones into the caves to snack in relative tranquility. In fact, archaeologists in both Sima de los Huesos and the Dinaledi Chamber claim that the bones are largely undamaged by the sharp teeth and powerful jaws of carnivores, meaning the remains were deliberately buried there shortly after death and were not disturbed by hungry scavengers.

Egeland’s algorithms sorted the sites into several groups quite reliably. One consisted of known prehistoric tombs and undisturbed modern corpses, containing larger numbers of more or less complete skeletons. Another consisted of the collected human corpses, the baboons that died in a cave, and the baboons that were eaten by leopards. The second group had a much less even distribution of bones; some parts of the skeleton were significantly less common than others.

The bones that made the difference appeared to be the bones of the hand and wrist (phalanges, metacarpals, and carpal bones), the forearm (radius and ulna), ankles (tarsals), and parts of the leg (femur and fibula, but strangely not the shin bone). Egeland and his colleagues say that’s probably because these bones are more attractive and accessible to predators, because they’re either small — like the hand bones and tarsals — or aren’t too dense to break easily with teeth and jaws.

gay naledi However, co-discoverer John Hawks of the University of Wisconsin-Madison is skeptical of the algorithm’s classifications, especially because it groups Skhūl Cave with predators, not burials. “This study puts Skhūl together with known cases of leopard predation. That tells you that the method doesn’t work to distinguish burial from carnivore activity,” he told Ars Technica.

Egeland’s colleagues say their work doesn’t dismiss the idea that hominins deliberately buried their dead in the Pit of Bones or Dinaledi Chamber, but the study also shows there isn’t enough evidence to prove the burial claims — and an extraordinary claim. requires very solid evidence.

What would definitive proof of ritual burial look like? According to Egeland, they appear to be undisturbed remains.

“I think there should be at least convincing evidence that no other biological (e.g., carnivores) or geological (e.g., water movement) agents have altered the skeletons after their initial removal. In this way, we can be reasonably sure that the patterns we see are the result of human behavior,” he told Ars. While carnivores could scavenge a burial, a completely undisturbed skeleton would, of course, provide pretty compelling evidence that it was deliberately placed out of the reach of scavengers.

Specially for gay nalediThe debate over whether the Dinaledi Room is a tomb or something else revolves in part on whether the bones there were chewed by carnivores. Hawks and others who interpret the cave as a place where hominins deliberately laid their dead to rest say the chamber is too deep and difficult to access for the bones to be the discarded remains of some predators’ meals. However, according to Egeland and his colleagues, it is possible.

“The inaccessibility of the Dinaledi room, assuming the current opening was the only access point in ancient times, would have made it difficult, but not impossible, for carnivores to be involved,” Egeland said. “Small carnivores may have been given access to the room to clean up the remains, and larger carnivores, such as leopards, could have dragged the corpses down into the room.”

Due to the conditions in the cave, the surfaces of many of the bones are not well preserved enough to say for sure. But while Egeland and his colleagues say relatively poor preservation could make it difficult to find evidence that carnivores tampered with the skeletons, Hawks says it supports his team’s claim that gay nalediThe remains are almost untouched by carnivores.

“My guess is that what carnivores do with bones isn’t all that different from what moisture and time do to collide underground — they both eliminate spongy bony parts, which are the ends of long bones, ribs and vertebrae,” Hawks said. “In other words, I wouldn’t look at vertebrae and ribs to decide whether a bone assemblage is the result of hominid or carnivore activity. You have to look at all the data, and at the Rising Star sites there’s just no evidence of carnivore activity.”

The thing to remember is that, even if carnivores gnaw gay naledibones, this does not mean that the humanoids did not bury his dead. After all, graves can be cleared. Cleaning up alone makes recognizing a deliberate burial tens of thousands of years later even more difficult.

Those are of course not the only explanations.

“Another possibility is that the hominins themselves entered the room to get trapped,” Egeland said. “We find this an attractive hypothesis, as the skeletal representation of the Dinaledi remains closely matches what we see in a collection of modern baboons that died naturally in a cave in South Africa.”

“Most of Dinaledi’s bones are still at the site and we have no way of knowing if the small area we dug is representative of the whole,” Hawks told Ars Technica. “We just excavated a new partial skeleton this year, apparently with some ribs in place. And the Neo skeleton, from the Lesedi room, that [Egeland et al.] not included in their study, has most of its vertebrae and many ribs, but is missing some of the long bones, which may still be present at the site.” Egeland and his colleagues also acknowledged that point in their paper.

Ultimately, the findings mean that these sites provide no convincing evidence so far that early Neanderthals or gay naledi bury their dead, but they don’t rule out the possibility either.