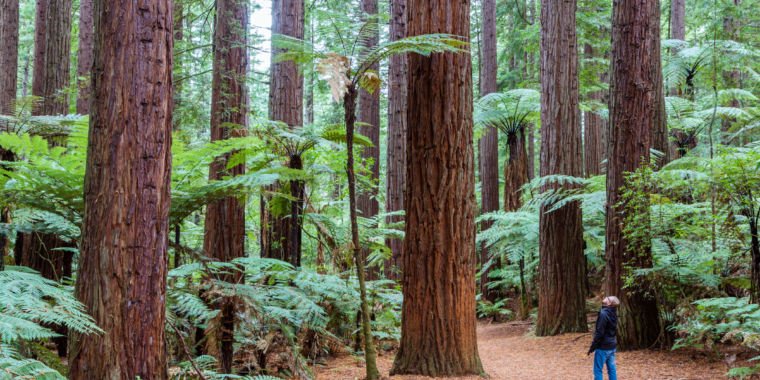 ROTORUA, New Zealand—My pitches to the editors of Ars, unlike my articles, are short and to the point. “I’m going to New Zealand soon. They have a big forest industry and there is a local research institute that is trying to convert waste wood into biofuels. I think that would be an excellent story.”

In my mind, its acceptance was equally brief: “Sweet as. Enjoy your journey to biochemistry land.”

Today, biofuels may conjure up images of ears of corn or Priuses for American readers, but the domestic industry has lately been as concerned with politics as with scientific innovation. While researchers and scientific organizations have looked at finding green energy sources in everything from human waste to humble algae, state and federal governments remain confused about how much priority this area should be.

l thought New Zealand would offer some chemistry-minded contrast. The country earns a lot of money from timber exports, but that profit generally does not come from primary forest. On the contrary, New Zealand is displacing many fast-growing exotic species. There is a lot of waste wood in this processing, and at present much of it is left to rot, contributing to the total carbon dioxide emissions from the country’s forestry industry.

The institute I would visit, Scion, has a long-term research program to convert the waste wood into biofuels. While that doesn’t completely reduce emissions, you at least get something useful out of the process. And with wood versus crops grown specifically for biofuels, you can’t choose your materials and fine-tune a process to make it efficient. Instead, Scion faces a unique challenge: find a process that works for New Zealand timber and then devise an efficient processing chain. Compared to the grasses and maize in the United States, this seemed like a battle for biofuels that was mostly in the lab.

I eventually found that my whole premise was wrong – biofuels in New Zealand aren’t really about biochemistry either. Or at least they aren’t only about biochemistry. During my afternoon in Scion’s sprawling innovation park, I heard a lot of economics and… physics? Sometimes you just can’t escape your day job, I guess. But it turns out that physics can offer some insight into how to improve the biochemistry of biofuels in the long run.

Wait, why do we care about corn again?

I am of course ahead of the curve. Why do people care about biofuels again?

The biggest problem with fossil fuels is not that when burning fuel CO. released2. No, the problem is that the loop is not closed. Instead, the fuel cycle is closed, but the time between CO2 is released by your Ford F150 and that CO2 emerging as an oil deposit takes millions of years. In the intervening years, the equilibrium amount of free CO2 is far too high for our own good.

An ideal fuel cycle would CO2 back in fuel in a few years – or at least fuel and other stuff. After all, the dependence on long-extinct trees for hydrocarbons does not stop at gasoline. Lubricants and plastics are two other uses that come to mind, and there are others – more cycles to close in the near future.

So, what are the alternatives? Extracting oils and fuels directly from plants is an age-old tradition among humans. Can a high-tech version play a role in meeting our future energy needs?

The US already spends a lot of corn making fuel. Corn is also food, of course, so that raises a second problem: land used for fuel cannot be used to grow food. Because the world’s population does like their daily diet, this causes some tension. And this tension has already sparked some regulatory action, with the EU limiting the growth of biofuels on land that would otherwise be used for food production.

You can of course separate the edible parts of the plant from the inedible parts and use the latter to make fuel – that way you don’t lose as much arable land for fuel production. Unfortunately, that doesn’t help much, because the plant that gives us maize is actually a raw material for biofuel of quite low quality. There are other crops, such as alternating grasses, that provide much greater fuel yield per land area. But there are also clear environmental costs associated with this. Grasses, for example, may require much more water than can be sustainably supplied.

All this means that the hunt for good biofuel crops and processing techniques is far from over. And all that brought me to Scion.

As befits a research institute dedicated to all things wood, Scion has a large and beautiful campus, located on the edge of a recreational forest and active geothermal field. The main house is a beautiful affair of wood panelling, wood art and Maori carvings. The receptionist greeted my arrival in a typical kiwi friendly manner and quickly found out I was early. (Not an hour too early, I was to dawn early – the joys of jet lag and a relaxed attitude to my schedule.) I took advantage of my host’s surprise to sleep through a security video and leak out some wifi to catch up on email.

In an old office full of papers, my host, Dr. Paul Bennet, take me through the ins and outs of a very practical approach to biofuels. Bennett was the first to dissuade me from the idea that I was going to get a biochemical research story. This initiative is actually all about economics. Biofuels and forestry, I discovered, are not really a match made in heaven.

Now, on the surface, they could be. Wood and paper plantations usually use fast-growing trees, and they are often grown on land unsuitable for other forms of agriculture: hill country, for example. On the face of it, this eliminates the problem of competition with food crops and gives you a viable fuel source from forest waste.

Dig a little deeper and it still looks good. In modern forestry there is a lot of waste wood. Although modern sawmills and pulp and paper mills are designed to make a product from any usable wood, a lot of waste is unavoidable. Sawmills burn sawdust for energy, but efficiently burning wet and muddy sawdust is not as simple as lighting a match. It might be more efficient to convert this to liquid fuel first.

But Bennett also pointed out the big problem: Trees cut for timber grow long before they are cut. Fuel ideally comes from a fast growing and harvesting cycle. And then we haven’t even mentioned the transport problem.

Oil comes from wells and can be transported in pipelines. It’s easy to get a lot of crude oil from one location and deliver it to one location, so you can build a huge refinery that distills, cracks, polymerizes and otherwise boils the crude oil into a huge range of organic chemicals that can be shipped for use or further processing. Scale is built-in.

Raw materials for biofuels are not easy to transport and they are difficult to scale.

“One of the big costs around biofuels has always been the cost of raw materials,” says Bennett. “You don’t want to transport that resource over long distances because you basically need a lot of water. So if you can do it [the processing] close to where you grow the material to condense it in energy terms, that could be better.”

Plant material is spread over a large area and must be harvested. After harvest, it must be taken to a central location for processing. Which scale is the most economical for this? A huge refinery gives you economies of scale on the processing side, but greater losses from transportation; smaller plants may converge somewhere in the middle.

That balancing point where the scale makes sense really depends on the nature of the crop and the land you’ll be harvesting from. And both can change depending on historical land use.

For example, in the US biofuel market, corn is king, and the economics of turning it into biofuel are well established. But it probably won’t stay that way. It competes with food production on two counts: It grows on the same land as food crops, and every corn kernel that goes into a biofuel reactor is a kernel removed from a potential mouth. It is not yet clear what the future holds for the next generations of biofuel crops: small and distributed, large and centralized, or somewhere in between.

This economic reality is the driving force behind current research. Obviously, waste wood from forestry will not go far, but plantations of faster growing scrub trees can provide an advantage as they can be grown in high density with cycle times of less than 10 years. And because they would be harvested with something more akin to traditional forestry machinery, they are still suitable for growing on fairly steep landscapes, avoiding competition with food crops.

What seems clear, however, is that biofuels, if used properly, can meet local energy needs. In the US, the use of waste biomass from agriculture and forestry could meet more than 30 percent of the US transportation fuel needs. Now I know that batteries are the current favorite, but liquid fuels still have a higher energy density and are still better suited for powering trucks, ships and airplanes for long distances.

But even assuming that the basic economics of harvesting and transportation eventually works, this trip to Scion reminded me that there are still problems with chemistry.