Looks like another satellite is falling apart at GEO | Techilink 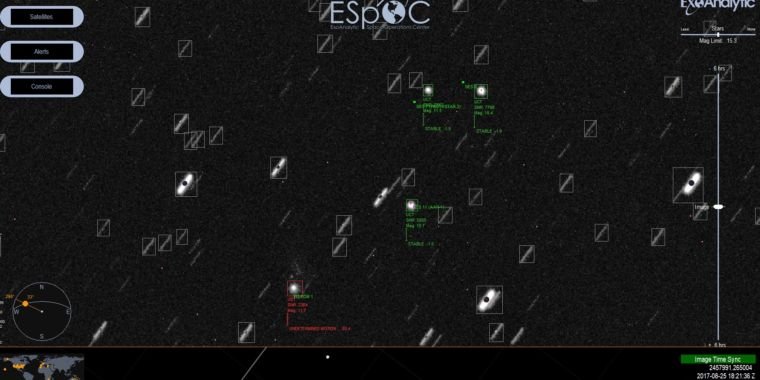 On Aug. 26, Indonesia-based satellite operator PT Telkom announced an “anomaly” in targeting its satellite into geostationary orbit. Company officials said that while they and contractor Lockheed Martin expected to restore service to the satellite, they were moving customers to another satellite as a precaution.

However, new evidence gathered by a US-based company that tracks objects in geostationary orbit, ExoAnalytic Solutions, suggests the satellite may be breaking up. The company uses algorithms to assess data collected by its global network of 165 optical telescopes for anomalies, and one of its instruments in eastern Australia apparently saw the satellite break up.

“What you see there looks like a lot of reflective material coming from the spacecraft,” ExoAnalytic CEO Doug Hendrix told Ars in an exclusive interview. “It could be solar panels, fuel or other debris. We don’t really know.”

This is the second satellite in about two months to experience such a problem in geostationary orbit, a location about 36,000 km above the planet where satellites can easily maintain their position over a fixed point on Earth. On the morning of June 17, Luxembourg-based satellite operator SES lost at least partial control of a large satellite in geostationary space. ExoAnalytic has also observed fragments of the AMC-9 satellite.

The company tracks about 2,000 objects in geostationary orbit, some as small as about 20 cm. Of these, about a quarter are satellites – a mix of military, weather and communications resources – and the rest is debris. An uncontrolled debris event in geostationary orbit is relatively rare, although there are concerns that it may be more common with more satellites in this valuable region.

“At GEO, there are a lot of undetected pieces of debris that the Air Force doesn’t publicize,” Hendrix said. “I don’t know if anyone knows the real population there well enough to know if this is an important addition,” he added of the pieces that seemed to be breaking off Telkom-1.

Launched on August 12, 1999 with a design life of 15 years, the Indonesian satellite is currently 18 years old. However, the company had hoped to squeeze more life out of it until 2018 or 2019, before a replacement satellite could be launched.

To keep the geostationary belt relatively clean, satellite operators generally move their older spacecraft to a “graveyard” above geostationary orbit at the end of their operational life. According to ExoAnalytic, Telkom-1 is now drifting, so it’s not clear if it will be able to be carried to this higher orbit.