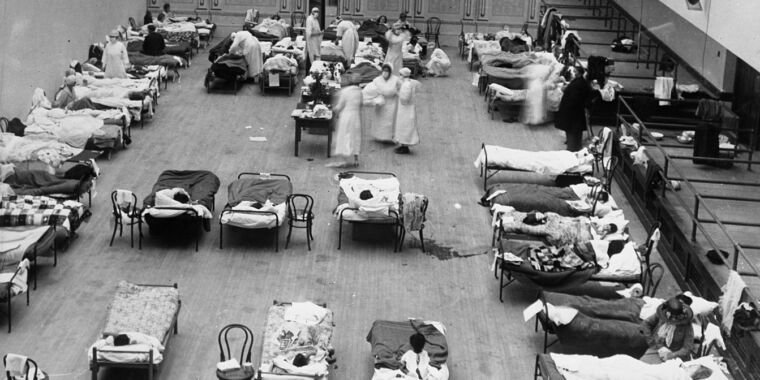 The lockdown measures being taken in response to the coronavirus pandemic are causing economic turmoil. When confronted with this, President Donald Trump abandoned the prospect of pursuing these measures in the long term, tweeting, “WE CAN’T LET THE CURE BE WORSE THAN THE PROBLEM ITSELF.”

But in reality, perhaps the best economic medicine is the dreaded lockdown. A working paper by economists at the Federal Reserve and MIT digs into data from the 1918 flu pandemic and finds that cities that responded quickly and aggressively to the pandemic also experienced stronger economic growth after the crisis was over.

An armchair economist would be happy to predict the economic effects of a lockdown. Intuitively, it seems unequivocally bad for that economy to freeze the economy of a city, state, or country by forcing everyone to stay at home.

But “economic activity is also reduced in the absence of such measures,” write economists Sergio Correia, Stephan Luck and Emil Verner. Even without lockdown orders, people going through a pandemic tend to stay at home as much as possible and change their economic habits to minimize their chance of contagion. So if a lockdown helps to better fight an outbreak, it could even help reduce the economic damage.

The 1918 flu pandemic may provide insight into how city and state economies responded to various public health strategies. The pandemic, which peaked in the US in the fall of 1918, is estimated to have killed approximately 600,000 people in the US and 50 million worldwide.

As with the current pandemic, there has been a fairly wide range of reactions to the outbreak. Some cities reacted quickly and implemented measures similar to the ones we see today: bans on mass gatherings, social distancing and business isolation. Others were a little later. Correia and colleagues put together a series of historical data sources to look at how different cities responded and how their economies fare after that.

All that’s really possible with this kind of historical data is to look at correlations: whether cities that responded faster, on average, had better economic growth after the pandemic. The problem with correlations is that they can’t show with certainty whether the rapid response has boosted economic growth or whether there is some other connection between the two factors, such as economically healthier cities that have better public health infrastructure in the first place, or a third factor underlies both response and economic growth.

But by trying to think about what other explanations there might be and checking for them in the analysis, it’s possible to find out which factors provide the most reasonable explanation for the data. That’s what Correia and colleagues did. Places that responded more quickly in 1918 tended to be further west, witnessing what had happened when the pandemic first struck the East Coast. But this also meant that places that closed earlier had economies based relatively on agriculture.

This means that there were two simultaneous differences between groups of cities, making it difficult to say which difference was more important – could any differences best be explained by western cities responding more quickly to the pandemic? Or did their more agriculture-based economies react differently for other reasons?

To deal with this, the researchers made sure their analysis took into account the relative importance of agriculture compared to production in local economies. They also checked to see if there were other systematic differences they needed to check for, such as whether western regions had stronger average health infrastructure than eastern regions. And they were responsible for the flu deaths that several places had seen before 1917, ensuring that any differences were due to responses to the 1918 pandemic and not just different regions’ exposure to imported infectious diseases in general.

There are some important uncertainties in this analysis. For starters, there was a huge range of results in the cities Correia and colleagues studied. The speed and aggression of each city’s pandemic response may explain some of the difference in those results, but there’s a lot more to understand. Seattle, for example, responded about as quickly as Cincinnati, but had much better growth after that. That doesn’t change the finding of the correlation, but it does mean that there’s a lot more to the story to discover in future research. It will be important to find out what else has played a role in economic resilience.

And of course, the 1918 pandemic isn’t a perfect proxy for what’s happening now. It came at the end of a world war and killed huge numbers of people of working age. The different nature of the modern economy, with its communications technology, global supply chains and reliance on services other than manufacturing, makes it difficult to understand how these responses will translate a century later.

But as with much research into the coronavirus, uncertainty is inevitable. The past can still be a useful guide, if not an exact template. And that past shows clearly that lockdowns don’t inevitably lead to worse economic outcomes – and there’s a good chance they’re the best option for both life and the economy.